An Interview with Filmmaker Maniko Barthelemy – The Feminist Wire

An Interview with Filmmaker Maniko Barthelemy

Maniko Barthelemy is the director, executive producer, and chief executive officer at Southern Belle Productions. Her most recent film, I Thought It Was Forever, chronicles the emotional and material afterlife of married couples once a partner reveals she or he is lesbian or gay.

Joseph Fischel is a postdoctoral fellow in the Pembroke Center for Teaching and Research on Women at Brown University.  He has a PhD in Political Science, and researches gender, sexuality, and the law. Starting in the fall of 2012, he will be an assistant professor of Women’s, Gender, and Sexuality Studies at Yale University.

Joseph Fischel (JF): Who are you, as a filmmaker? Why are you drawn to making documentaries, and what do you hope to accomplish through your films? 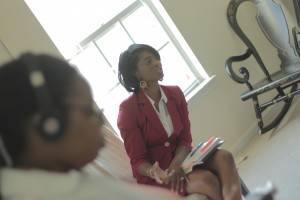 Maniko Barthelemy (MB): I am a filmmaker who marries the experiences I’ve gained as a television and print reporter with my military and legal background.  My passion is for in-depth stories about ordinary people who face extraordinary odds. A goal throughout all of my films is to highlight and dispel misconceptions about people or an issue that directly or indirectly affects everyone. I purposely cast a diverse group of people in my films as an effort to ensure no one brushes off an issue by saying “oh that only happens to ‘that race’ or ‘that person.’” The power of film is its  ability to force everyone to hold up a mirror and embrace the reality that we are all more alike than different.

JF: So here we are on The Feminist Wire, which begs the question: what kinds of feminist, antiracist, or other social justice commitments inform your approach to filmmaking and the topics you choose to cover?

MB:  The ultimate goal of my work is to reveal the potential to heal from emotional or physical scars. As a child, I  preferred to watch “Dateline” and “20/20” over cartoons or comedies.  I’ve always been drawn to how ordinary people captivate as they tell stories of survival, setbacks and support. You never know how strong you have to be in life, until being strong is your only option. 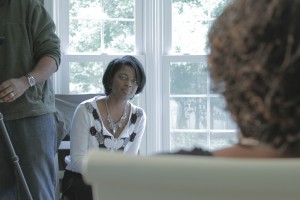 I choose issues that will foster an honest discussion, one that incorporates many perspectives. It’s easy to pigeon-hole a filmmaker or turn them into a single-axis activist, if you only see one side presented in a film. I start with a vision but more often than not everything changes as soon as the cameras start rolling. So I don’t think my films are explicitly or intentionally feminist or antiracist.  On the other hand, in all of my films, my goal is to give voice to people who feel like their opinion or reality is too often silenced.

JF: What are the most compelling film projects you’ve worked on? Do you see a connective thread—aesthetic, political, or otherwise—tying these projects together?

MB: Before I Thought It Was Forever, I produced The Unlikely Sex Offenders, a short documentary about two Louisiana women who, among hundreds of others, are registered sex offenders because they were found guilty of soliciting an undercover detective for oral or anal sex. The film examines an 1805 Louisiana Crime Against Nature Law and the state’s linking of the law in the 1990s with its sex offender registry. Due to a civil rights lawsuit filed while we were filming The Unlikely Sex Offenders, change is on its way in Louisiana. A district court judge ruled the sex offender registration requirements for these hundreds of women (as well as some transgender women and some men) convicted of soliciting sex unconstitutional.  Hopefully, the many others still on the registry will soon be removed.

Another of my films, From Wrong to Right, is a documentary about a unique program in Louisiana that trains ex-felons to become life skills instructors at some of the toughest alternative schools in New Orleans. The film examines the relationship between a 17-year-old eighth-grader and his life skills teacher. The teacher served five years in prison for selling drugs and grew up in the same housing projects where the 17-year-old was living with his family. The film highlights the systemic social ills that cripple teens in New Orleans.  In looking over my career, I think choices, chances, and consequences are persistent themes of my films.

JF: Can you tell us more about your newest production, I Thought It Was Forever? What is the premise of the documentary? Why did you choose to investigate this issue?

MB: I Thought It Was Forever is a film that takes viewers on a candid journey with seven people who married for love and later found out their spouses had a painful secret—everyone in the film deals with a spouse coming out. Repeatedly, those we filmed said they thought their marriage would last “forever,” which is how I came up with the title. 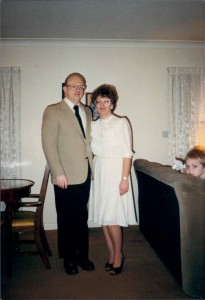 Sue and Randy, from I Thought It Was Forever

I chose to produce this film last year, after seeing a marathon of news coverage on the passage of New York’s same-sex marriage bill. I got to thinking about the 2004 political bombshell dropped by former New Jersey Gov. James McGreevey, that he was gay. Would things have turned out differently if same-sex marriage were legal? If being gay or lesbian was not a political liability?  At the time, no one could believe McGreevey’s wife Dina stood by his side; there was swarming speculation that she had to have known. No one considered the situation in greater complexity–what if intimacy is not only about honesty, but about protecting your loved ones’ secrets and pains?

JF: So permit me to go straight to the uncomfortable question. While I found the trailer of your new film undoubtedly captivating, as a queer man, I’m hesitant to jump on board.  Given the long and unfortunate media history—especially talk show history—of treating LGBT people as traitors, deceivers, or otherwise violators to norms of intimacy, I worry that I Thought It Was Forever will repeat the narrative of gay betrayal. Allay my fears!

MB: That’s an excellent point and is exactly why in the film, viewers get to see and hear multiple viewpoints. The film does not victimize or vilify gay, lesbian, or hetero persons. 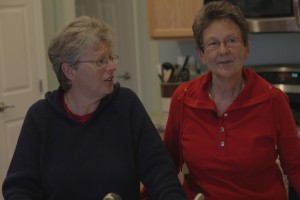 Sue and her partner Jackie, from I Thought It Was Forever

In I Thought It Was Forever, we spend time with Randy and Sue; the couple married during the late 70s and divorced nearly 21 years after they took their vows. Sue says she came out to Randy five years into their marriage, a claim he vehemently denies. Randy, Sue, their adult children and Sue’s partner, Jackie are all in the film. Sue and Randy no longer speak to each other.

On the other hand there is Mark and Lorraine. The couple share custody of their children and have an exceptionally friendly relationship with each other.. They were married 16 years and both struggled with coming to grips with Mark’s attraction to men, which he says began at the age of 11.

JF: Alright, my queer paranoia is in retreat. What did you hope to learn from these families-in-dissolution? What do you hope your viewers will learn?

MB: I have learned of the overwhelming amount of shame and blame that can push a person to shield themselves from falling in love again, consider murder/suicide and/or internalize their pain so it balloons into a health issue, mental and/or physical. My hope is that viewers of the film will see that there is another future available when “happily ever after” takes an unpredictable twist and turn.  While marital dissolution can be excruciating, I Thought It Was Forever chronicles people repairing their desires to love and be loved again.

JF: The revelation of gayness or lesbianism is not always the only problem infecting the relationships you’ve filmed.  Did you intend for your documentary to explore other issues that couples and families confront? Do domestic violence and poverty affect the couples, and if so how? 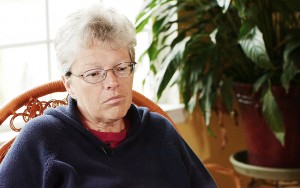 MB:  Many families in the film experience mental and physical abuse, abuse that’s often overshadowed by the spouse coming out.  Sometimes it seems as though, had the spouse not come out, the emotional and physical violence would have continued uninterrupted. One cast member says, “[my spouse] picked me up by my shoulders and threw me so hard I landed between the hinges of our bedroom door and broke the door. The second time, he pushed me so hard, I fell and hit my head on the corner of the coffee table and he walked out. I was on the floor, knocked out. I stayed because I took my vows seriously.”  Financial dependency complicated exiting out of the relationships, too.

JF: As we all know, same-sex marriage continues to be politically contentious in the United States. In the upcoming year, referenda and legislative battles will take place across several states concerning the recognition of same-sex couples. Does I Thought It Was Forever take a political position on same-sex marriage?

MB: The film doesn’t take a political position but everyone in the film is asked the question, “how do you feel about same-sex marriages?” Their answers are explosive and passionate.

JF: In the United States, fewer adults are getting married than ever before in our national history, while older adults are increasingly getting divorced. Maybe gays and lesbians have it all wrong: rather than clamoring to get married we should all be more cautious about the “forever” institution.  What would the participants in I Thought It Was Forever say? What’s more destructive, oath-breaking or oath-taking? Do your participants want to remarry?

MB: Some cast members want to re-marry but are cautious; at one point, someone asks her love interest to take a polygraph test.  Another person laments that her 30-year marriage was the only chance she had at love.

JF: The couples and families you filmed—where are they now?

MB:  You’ll have to wait until the film is finished but I can tell you that while some futures seem predictable, you’ll find more than a few surprises in the end. Readers can follow the film’s progress here or on Facebook.

JF: My partner and I are getting married in June. Assuming neither of us is a closet heterosexual, what advice would you give us, having observed and interviewed the couples in I Thought It Was Forever?  How will we—and other young couples marching toward betrothal—make it to “forever”? Tell us the secret Maniko!

MB: We’ve all heard the saying “opposites attract,” but opposites and secrets can destroy too. In I Thought It Was Forever, almost everyone ignored their intuitions. They thought that by packing away their insecurities or avoiding troubling signs, eventually things would get better. In the end, sadly, these tactics failed. Holding on and holding out for the person you love to change can make the break-up that much harder.

JF:  That’s depressing but refreshing advice. I suppose the durability of intimate relationships rests just as much on the ability to change as it does on accepting the unchangeable.  Thanks so much for speaking with me Maniko and good luck with the production. Readers interested in viewing the trailer and donating should click here.

MB: Thank you Joe. I know some readers may question why we are still raising funds.  Southern Belle Productions is an independent film company that primarily produces documentaries. Our support comes from art theatres and friend networks who trust our product and support our goal to share fair, balanced and in-depth films about how ordinary people confront extraordinary circumstances. Southern Belle’s approach to crowd-funding reflects our ethos as a company. We’re hoping that I Thought It Was Forever might air on select television networks and be screened across the country, with guest appearances by cast members, of course.  My hope is that viewers become more compassionate toward those facing this reality.