Uterine Fibroids: Knowing and Trusting the Signs – The Feminist Wire 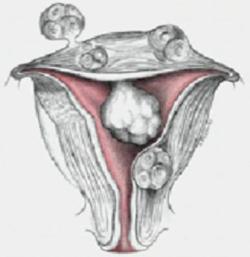 The pain shooting through my lower abdomen felt like it would never end. By the second day, it had gotten so unbearable there was no choice but to go to the hospital. What I initially assumed were menstrual cramps turned out to be something else – uterine fibroids.

Uterine fibroids are non-cancerous tumors that grow inside the uterus or on the uterine wall. According to the U.S. National Institutes of Health (NIH), up to 80% of black women will develop fibroids. Black women are also more likely to develop them at a younger age. I was 25 when diagnosed.

As it turned out, I had had fibroids for at least five years. In hindsight I realize there were warning signs that I failed to recognize. When I was 20, I fainted in a New York City subway station. Thank God my sister was with me. She called the ambulance that rushed me to the hospital. After running tests, I was told that I was anemic. I simply attributed the iron deficiency to my heavy periods, not knowing both were warning signs for fibroids. One is also more susceptible to fibroids if there is family history. Several women on my father’s side had them and my mother had to have a hysterectomy due to the condition.

There are other signs a woman should pay attention to such as bleeding between periods, severe cramping, bloating of the abdomen or pelvic area, and pain during sex.

In total I had thirteen fibroid tumors, ranging from 2 to 6 cm (or the size of a small rock to the size of a baseball). At the time I wondered if it was because of something I had done. My gynecologist mentioned that red meat, a staple in my diet at the time, had been linked to developing fibroids. And earlier this year, researchers at Boston University published a study in the American Journal of Epidemiology linking hair relaxers to the development of uterine fibroids. This may have also increased my risk.

And what about having children? Was it possible? My gynecologist told me that due to the quantity and size of my fibroids, it would be difficult to conceive a child and if by chance I were able to, the tumors could cause complications in the pregnancy.

After much thought, I decided that the best course of treatment would be surgery. In January 2009 I had a myomectomy, a procedure in which the fibroids are removed and the uterus is spared. Two years later I gave birth to a healthy baby boy through cesarean section, which was recommended in my case because my womb was no longer strong enough to withstand natural birth.

Every woman is different and the same is true for every woman with fibroids. Depending on your age and the amount and size of the tumor(s), your gynecologist may recommend hormonal therapies, embolization (a non-surgical procedure that stops blood flow to the fibroids), or surgical treatment in the form of a myomectomy, a hysterectomy (the removal of the entire uterus), or an endometrial ablation (the removal of the uterine lining).

If you discover that you have fibroids, speak with your doctor about which treatment is right for you. And trust the signs. Your body never lies.

Camille Wanliss Ortiz is a New York-based writer and publicist. Her work has been published in Harlem World Magazine, Clutch Magazine, Promethean, andKweli Journal. She holds an MFA in Creative Writing and a BA in Communications from the City College of New York (CUNY).