Parents Less Likely to Take Girls Outside to Play 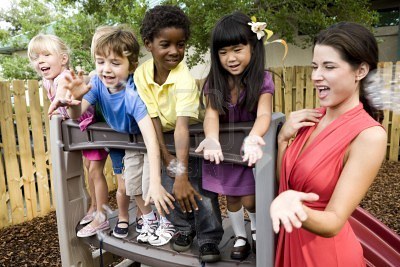 Nearly half of preschoolers don’t venture outside with their parents to play every day, and girls are most likely to suffer, according to a new study of 8,950 U.S. kids in their final year before entering grade school.

Children who are cared for at home also appear to be bigger couch potatoes. Although preschoolers should get at least 60 minutes of physical activity every day, 42% of those who don’t regularly attend child care don’t go outside daily. Eighty percent of the kids in the study attended some sort of child care, averaging 28 hours a week there.

The situation only worsens once they enter elementary school. In December, a study found that only six states — Alabama, Georgia, Mississippi, North Carolina, Illinois and Iowa — adhere to standards from the National Association of Sports and Physical Education that schoolchildren participate in 150 minutes a week of physical education. And just three states — Delaware, Virginia and Nebraska — have 20 minutes of mandatory elementary-school recess a day.

Related Items
← Previous Story How Much is Your Vagina Costing You?
Next Story → The War on Women: A Progressive Man’s View