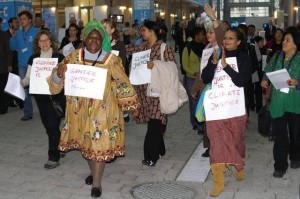 The vicious attacks on women of color are not unique to the health care system.  This has been evident within the recent debate that followed Hilary Rosen’s comments about Ann Romney, stay-at-home moms, and work.  Whereas the GOP has framed Rosen’s statements as part of the Democratic Party/secular Left’s contempt for the family—all straight from the Right’s historic demonization of feminism—it is the policies of the Republican Party that have continually damaged women, and particularly women of color, as mothers.  Whether eliminating subsidies for childcare, requiring that women receiving welfare get a job to learn “the dignity of work,” and/or enacting policies that constrain or eliminate salaries, the choices available to women of color have long been overdetermined by the realities of racism and sexism.   As noted by Laura Flanders,

For all the shameful sucking up to multimillionaire mom Ann Romney after Democratic pundit Hilary Rosen accused her of never having worked “a day in her life,” the reality is neither Republicans nor Democrats treat most parenting as work, and thousands of poor women are living in poverty today as living proof of that fact.

Do we need to state the obvious? Women of different classes are beaten with different rhetorical bats. For the college-educated and upwardly aspiring, there’s the “danger” of career ambitions. Ever since women started aspiring to have men’s jobs, backlashers have told those women that they’re enjoying their careers at the expense of their kids’ well being. They really can’t have it all. They’ll raise monsters, or worse, they’ll grow old on the shelf.… The media still love stories about stay-at-home moms and professional women are still punished for wanting to succeed. For the poor, though, it’s very different.

Poor women, particularly poor women of color, are simultaneously denied the “choice” of whether to work or stay-at-home (why aren’t men asked to choose?) and demonized as bad parents.  The war on mommies is not a universal war, as evidenced by the Moynihan Report AND Gov. Mitt Romney requiring that mothers on welfare with children under the age of 2 go to work in an effort to teach them “the dignity of work.”

With the discourse on health care, working mothers, education, and criminal justice, we see the ways in which race and gender (nation, class, and sexuality) directly impact people’s lives, whose life matters and whose future is worthy of public concern and policy.   To deny health care is yet another instance where women of color are stripped of humanity, denied rights as citizens and people.  It is part of a larger history whereupon women of color have been subject to the violence of the state, stereotypes, and structures of inequality.  “It’s just a long history of negative stereotypes of black women that have changed over time to suit the political circumstances, but that focus on our irresponsible childrearing and mothering,” noted Dorothy Roberts within a Colorlines piece  “The thread that joins them is the idea of total sexual immorality and irresponsible reproductive responsibility on the part of black women, who become a burden on the state and also have no maternal bond with their own children.”

The violent disregard for Anna Brown’s life, and the benign neglect approach to health and welfare of women of color is clear with the history of forced sterilization faced by Native American and Puerto Rican women; 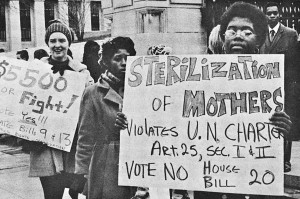 it is clear with the systemic incarceration of black and Latina women; it is clear with the stereotype of the Jezebel, the pregnant crack addict, and the “welfare queen”; the war on women of color is nothing new is evident with Kelley Williams-Bolar, Tanya McDowell, Raquel Nelson and countless more women of color whose rights and humanity have been stripped before a silent nation.  The silence is telling as to whose life matters in the face of this war on women of color.

This continues to this day with two recent developments within the criminal justice system.  In Florida, Marissa Alexander sits in a correctional facility awaiting sentencing. In 2010, her husband, a man with a history of domestic violence, attacked Alexander.  She described the incident as follows:

In an unprovoked jealous rage, my husband violently confronted me while using the restroom.  He assaulted me, shoving, strangling and holding me against my will, preventing me from fleeing all while I begged for him to leave.  After a minute or two of trying to escape, I was able to make it to the garage where my truck was parked, but in my haste to leave I realized my keys were missing.  I tried to open the garage but there was a mechanical failure. I was unable to leave, trapped in the dark with no way out.  For protection against further assault I retrieved my weapon; which is registered and I have a concealed weapon permit.  Trapped, no phone, I entered back into my home to either leave through another exit or obtain my cell phone. . . The weapon was in my right hand down by my side and he yelled, “Bitch I will kill you!”, and charged toward me.  In fear and desperate attempt, I lifted my weapon up, turned away and discharged a single shot in the wall up in the ceiling.  As I stood my ground it prevented him from doing what he threatened and he ran out of the home.  Outside of the home, he contacted the police and falsely reported that I shot at him and his sons.  The police arrived and I was taken into custody.

Just as Native American women, undocumented women, and GLBT people are denied protections under the Republican-blocked Violence Against Women Act, just as access to prenatal care and preventive care is disproportionately denied to women of color, just as women of color face the devastating impact of the war on drugs and the war on welfare, just as mothers of color have faced a culture of demonization and criminalization, just as youth of color (as young has 6) face suspensions, criminalization, and detention with the greatest frequency, Marissa Alexander faces the injustice of her case—one that is defined by the denial of choice, humanity, future, and power.

While women of color continue to face the brunt of the war on women, evident in denied health care, increased surveillance, the scapegoating of women of color, and dehumanizing stereotypes, all of which results in inequalities, the specific costs and the dreams deferred resulting from intersections of racism, sexism, and classism remain absent from public discussions.  The lack of concern and national engagement with the devastating impact of the policy, cultural, and daily attacks faced by women of color is yet another example of “the war going outside.”