Observations on "Austerity" from a Greek Feminist – The Feminist Wire

Home / Economy / Observations on "Austerity" from a Greek Feminist

Observations on "Austerity" from a Greek Feminist

The economic “doom and gloom” in Greece is no accident, and it affects women disproportionately.

Imagine being trapped by an evil financial wizard in your bedroom, robbed reputedly not just for funds alone, but violated of your basic sanity, then stripped to the bone by measures that don’t seem to end or to make sense. 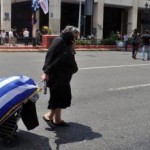 This is the situation in Greece. Financial disaster is everywhere. The British have mockingly claimed they can better protect the Parthenon marbles, as the Greeks are distracted by rage over financial cuts. Corruption in the government leads to massive distrust.

Everyone in the country is in chaos, haunted by the fear that there is no roof left over our heads. Women, especially, struggle to put meals together as prices remain too high in comparison to wage cuts. My people are in a state of shock over this robbery in which levies to “save the country” are followed by a wave of speculation regarding Greece’s exit from the EU and a looming bankruptcy.

A constant stream of bad news and equally bad measures handed down from Europe, with little input from Greek people, promises to handicap our country for the next many years. The bottom of our society has fallen out as a result of constant protests, street violence, and vandalism. 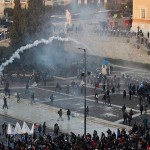 As an “on the ground” observer, I believe this is just the beginning of a longer-term crisis. For example, let’s consider retirement. Thoughtful policies such as raising the retirement age and supporting work positive pro-aged environments were not seriously entertained. Policies instead have focused on over-taxation, with rates up to 23%, and reductions in salaries that put less money into the hands of workers.

Fiscal cuts are everywhere, slicing and dicing healthy and unhealthy sectors alike, and they are profoundly (dis)affecting people. Little consideration is given to long-term investments or support for small and mid-sized businesses that can create jobs. Greece seems lost. We are lost. The middle class has been hollowed out.  And financial entities near and far are certainly not eager to invest in this volatile environment.

To top it off, a consistent pattern of over-retirement ensued after the cutbacks, in which government jobs were lost rather than replaced. And government-fed sectors, as well as the private sector, suffered cuts, too, with severe caps on income.

These measures, which remove funds from households, also weaken the state. Families are unsupported, prices are shockingly high, and we are seeing no pro-work, pro-aged, and pro-welfare provisions. Here, you are overage at 40, with dire fiscal consequences. 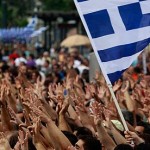 Should we be surprised that people have taken to the streets?  Over 50% of the youth population is unemployed, and the wage cuts for those currently employed render current wages on par with older part-time wages. It would seem we have collectively fallen out of grace with the financial wizards, creating depression-style economics.

The university sector has also struggled with under-financing.  A bridge between the university and the business sector is missing. Educated people with vital skills are not getting jobs; people are underutilized. And there is no second chance in this system if you wish to change jobs or start over.

Teaching feminist theory in Crete University was a difficult adjustment for a Greek American woman who didn’t understand the privilege of an American education. The university here has turned from site of protests to a public dump. Tuition policies would work better to preserve the infrastructure than an entitlement to education that people take for granted. I wish to preserve that right, but it is hard to look at the ruins. 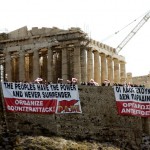 Yet the financial picture, however gloomy, does not speak to the Greek spirit to overcome crisis.

I live in Chalkida. The city is close to Athens in Euboea, about an hour’s drive away. It is known for crazy waters that change direction from time to time due to the tide that follows the moon cycle. This city has also seen more sane protests than in Athens. The market is relatively quiet, even though the sales were welcome. People in my part of town hold their spirits relatively high. “This too shall pass.” “Let them take the needed funds.” “We are strong enough to rebuild Greece!” “Greece is Greek!”

Time will tell, but I remain hopeful.  I am Greek.

Sotiria Theoharis received her Ph.D. in sociology from the Department of Social and Behavioral Sciences at the University of California San Francisco. Her dissertation was titled Life with Breast Cancer: Timing Medical Intervention. She was born in the United States in San Jose, California, and has also lived in the UK. She has taught at Crete University and San Jose State University. She currently resides in Chalkida, Greece, where she is a writer for halkida.tv, an online news journal.