Here at TFW, we trust women. That’s why we want you to know that January 20th – 27th is Trust Women Week.

The Silver Ribbon Campaign to Trust Women, a coalition of reproductive rights and justice nonprofits, was founded in response to last year’s War on Women. In 2011, we saw an unprecedented rollback of women’s reproductive and sexual freedoms. Some 135 laws were enacted in 36 states, and 68 percent of these restricted access to abortion. From abortion rights, to contraception, to cuts in health care spending, to the HPV vaccine, women’s reproductive bodies were positioned as the political battleground for the very soul of America.

Obviously, this epic struggle to turn back the clock is bad politics and dangerous for women. Especially when most of the participating politicians are white men, and certainly when their conservative agendas do not include advancing the rights and wellbeing of more than half the country’s population.

With 40+ partners ranging from the American Medical Student Association to the Religious Coalition for Reproductive Choice to SisterSong, the Campaign to Trust Women takes a stand for women and against these regressive rollbacks.  We agree with the coalition: it’s time to express our voices and to come together and show our strength through collective action.

You can participate by joining the national “virtual march,” organized by Trust Women and MoveOn.org. Messages from the online action will be delivered to members of Congress and state leaders to show that Americans trust women to make their own decisions about their bodies, families, and lives. Also, visit the Trust Women site for more ways to get involved.

The place is here, the time is now, and the future can be ours. Trust women. 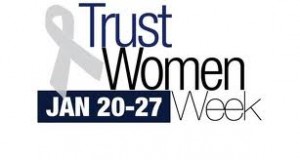