Black feminism lives as an abundant and hopeful critique of our everyday circumstances. Black feminism lives as a perpetual readiness to engage and instigate transformation grounded in a deep love for our people and all oppressed communities.  Jessica Solomon, of the groundbreaking, healing performance collective the Saartjie Project, faced a moment for a Black feminist response, when she encountered a disturbingly racist and dehumanizing exhibit at the Crime and Punishment Museum in Washington, D.C., called “Dead Men Walking.” 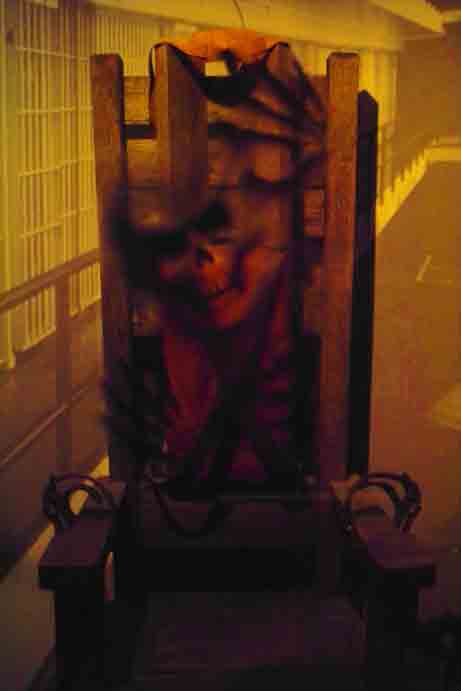 In an email that asked “have we forgotten Troy Davis already?” Jessica shared her outrage at seeing young Black men in the D.C. streets in orange prison jumpsuits, hired by the Crime and Punishment Museum to promote a Halloween exhibit featuring an electric chair that had been used to kill 125 death row inmates. The stark image of these young Black men dressed for death in the wake of the publicized execution of Troy Davis and the long history of the disproportionate executions of Black men with very questionable evidence brought Jessica to action.

In support of Jessica’s call to action to hold this museum accountable for its use of death, oppression and in this case the bodies of young Black men in the D.C. area to glamorize one of the most tragic components of our society, and towards our continued responsiveness to institutions in our own communities, Jessica and I had this conversation:

Can you tell us about the encounter that sparked you to action?

On a Saturday afternoon this summer, I was exiting Gallery Place metro station with a friend when, in the midst of a busy intersection we spotted three men on orange suits in the distance.  I was a bit alarmed, and when I saw them passing out paper to a passerby, I became curious.  I walked up to a young man who could have been one of my former students and took a flyer.  It was a coupon for the Crime and Punishment Museum down the street.  I asked him why he was doing that, he laughed, shrugged and said “Its just a job, I don’t care.” It felt like he’d been asked that before.  “Its just a job”…

I totally get that. I’ve definitely taken jobs that I had to disconnect from to get through.  But orange jail suits?! I had to go to the museum and say…  something.  I walked in and asked to talk with someone about the orange suits.  I was approached by the Director of Operations, an older white man, who did not understand why I was there.  He told me “it was marketing” and swiftly directed me to a young black woman who worked at the gift shop.  She asked if I was “mad because they were African-American.”  “Sure, we can start there,” I said.  She went on to tell me how everyone wears the suits and that she’s worn it a few times.  “It’s the funniest thing,” she said, “once someone called the cops because they thought I was a real criminal!” It wasn’t funny and I wasn’t laughing.  I knew our conversation would only spiral from there so I thanked her and told her I understood that she was doing her job and that our conversation may look a little different outside of the museum.

How did you first encounter this museum?

I’ve known about the Crime and Punishment Museum for some time.  A few years ago I was speaking with a youth worker in Anacostia (think “Southside, USA”) who was trying to get free tickets to the Museum for her students.  And I wondered why she would take her youth on a “field trip” to see the things encased in glass they probably have already encountered in some negative way in their own communities?

Then, I heard about Holla Back DC’s! organizing working around the “Crimes of Passion” exhibit that glorified Domestic Violence. And then this summer I saw the orange jail suits.  Young black men, employees of the museum, dressed in their “uniform” – orange jail suits passing out coupons for the museum.

And now, here we are, with the “Fright at the Museum,”an exhibit featuring an electric chair used to kill some 100 plus people.  This was the straw for me.  I can’t ignore it or make shallow complaints anymore.

What inspired you to envision a Black feminist response to this institution? What are some of the influences that you see as resources to you and your collaborators in this process?

I give infinite thanks for the lessons I learned and lightworkers and organizers I met this summer at Indigo Days, Urban Bush Women’s Summer Leadership Institute, People’s Institute for Survival and Beyond, Highlander Center’s Cultural Workers Weekend and Alternate Roots.  No doubt I am influenced and fortified by those experiences.  I’m drawing on a deep history of building community, community engagement and visionary organizing.  I’m thinking about Troy Davis and the young people at juvenile detention centers who wear those orange suits everyday.  I’m thinking about my sisterfriends who’ve experienced domestic violence.

One of the things I bring to this work is the notion that we must critically love the institutions we’re a part of.  Granted, I am not affiliated with the Crime and Punishment Museum at all but through this framework of “critically loving” and questioning that which I’m a part of, I am able to:
1.  harness my anger and
2.  strategically engage with this institution via direct action to press for systemic change while
3.  dismantling the racist/sexist/violent machines that were been built long before the museum that validate its existence.

I put out a call for collaborators and our first meeting was Tuesday October 25, 2011.  I am full of emotions and questions and I am calling on all my ancestors!

What is the response so far and how can people get involved?

There has been a beautiful outpouring of support, outrage and a desire for action. Many people did not know what the Crime and Punishment Museum was up to and there are many people who have been organizing for some time.  I look forward to having all these people in the same room.

We are meeting in Washington, D.C. to figure out what folks are up to already, what resources do we have at our disposal and how can we move forward with both direct action and ongoing engagement for systemic change. Some folks are primed to protest and march and that’s great and necessary but we must offer a vision for a world we want where exhibits and places like this don’t exist.

In your initial email calling us to action about this, you mention that in the movement towards the world we deserve, we should create a living Love and Justice museum!  When can we start?! What will it include?

Ummm right now, please! Let’s see…  It would include optional hugs upon entry and music by Sweet Honey in the Rock and interactive Visionary Organizing exhibits, and a wishing well/ affirmation pool and lots of other goodies, co-created by the community, of course!