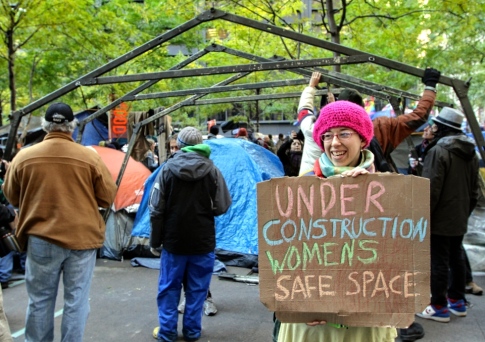 The Occupy movement has a growing challenge that needs immediate attention: in-house rape.  As of today, there are at least 4 reported rapes in Baltimore, Cleveland, Glasgow and Dallas, the latter of which includes a 14-year-old runaway girl and a convicted sex offender.  I imagine there are several others, most of which have likely gone unreported—for various reasons.  First, many of the police officers working Occupy movements haven’t necessarily proven themselves to be “officer friendly.”  Second, not all women experience the privilege of being seen as a victim, particularly where sexual violence is involved.  Third, there is inside pressure not to report rape outside of the camps for fear of bad publicity (does this sound familiar?).

The reality of sexual violence within the Occupy movement highlights concerns raised by Occupy Patriarchy and several others: patriarchy, which depends in large measure on the exploitation, disempowerment, and subjugation of women, is not only foundational to institutions such as Wall Street, but is operative within Wall Street and other Occupy movements.  The implications for this are quite drastic for all women.  However, they are particularly cumbersome for those that are more vulnerable: the underage, the poor, the disinherited, the racialized, the queer, etc. etc.  Rape and all other sexist and misogynist behavior occurring at Occupy events, must be called out and addressed.  Nothing short of Zero tolerance needs to be demanded, by women and menfolk alike, immediately.

On Friday, Occupy Wall Street created a 16-square-foot “safe house,” designed to shelter up to 30 women.  This is a start.  However, how about setting up “safe spaces” AND placing the onus on men to stop sexual violence?  According to feminist activist, Deanna Zandt, “getting the men not to rape [the women]” is a better starting point.  I concur. Columnist, Katha Pollitt, put all of this in perspective when she recently asked, “Can you imagine hetero MEN having to set up a safe space to protect them from women and LGBT?” No.  Most of us can’t.  Too many of us have been wired to see men as predators and women as princesses needing protection, the latter of which doesn’t always have a happy-ending.  Something’s got to give.

Women need safe spaces because we live in a rape culture that makes sexual occupancy permissible anywhere.  Destruction of the latter needs to happen yesterday—and not as a leverage against Occupy protestors (or here), but as a requirement of human dignity.  Economic and gender justice go hand in hand.  While Occupying Wall Street and other locales, Occupy Rape Culture simultaneously.

**Below is a statement by members of the sexual assault survivor’s support team at Occupy Wall Street.  Please read and share widely.

On the morning of October 29, a woman participating in OWS was sexually assaulted at Liberty Plaza. The person who she identified as having assaulted her was arrested on November 1 for a previous assault.  He has since been released on bail.

On the morning of the assault, the survivor was accompanied to the hospital by a group of women from OWS, including a social worker, to support her and act as advocates. From the moment the incident was discovered to the present time, the survivor has been surrounded by a network of allies and trained advocates offering resources to provide emotional, medical, and legal support. At every step of the process, and in line with the core principles of survivor support, her wishes as to how she wanted to proceed have been honored, and information from a range of sources has been provided to her about her options. The survivor knew immediately that she wanted to make sure that the person who assaulted her did not harm anyone else at OWS. Community members honored this demand by asking that this person stay off site, and, when he refused, monitored his activity, ejected him from the space and escorted him to police custody.

These efforts provided the survivor with the time and space to carefully review the options available to her.  Following two days of discussion with family, friends, supporters, and anti-violence advocates, the survivor decided to make a report to the police and to push for a criminal investigation and prosecution. Supporters from OWS accompanied her to the police station, and will continue to support her throughout the legal process.

We have been saddened and angered to observe some members of the media and the public blame the survivor for the assault. A survivor is never at fault. It is unacceptable to criticize a survivor for the course of action they chose to take or their community for supporting them in that choice. Additionally, we were troubled at the time of her report that responding police officers appeared to be more concerned by her political involvement in OWS than her need for assistance after a traumatic incident of sexual violence. A survivor is not at fault for being assaulted while peacefully participating in a public protest to express their political opinions. We are aware that this is one of several known cases of sexual assault that have occurred at OWS. We are dismayed by these appalling acts and distressed by the fear among many Occupiers that they have caused, as well as their negative impact on our ability to safely participate in public protests. We have the right to participate in peaceful protests without fear of violence.

We are also concerned that segments of the media have attempted to use this incident as another way to disingenuously attack and discredit OWS. It is reprehensible to manipulate and capitalize on a tragedy like this to discredit a peaceful political movement. OWS exists within a broader culture where sexual assault is egregiously common: someone in the US is sexually assaulted every 2 minutes, most assaults are never reported, and most rapists are never held to account.¹ We live in a culture of violence in which sexual assault is often ignored, condoned, excused and even encouraged. We note that it is particularly difficult for survivors of assault at OWS to feel confident in reporting crimes to the NYPD – the NYPD’s unjustifiably aggressive and abusive policing of OWS has undermined trust in the police force amongst protesters.

As individuals and as a community, we have the responsibility and the opportunity to create an alternative to this culture of violence. Advocates, some of whom are survivors themselves, have worked for decades to address sexual violence generally. We are working for an OWS and a world in which survivors are respected and supported unconditionally, where they are supported to come forward, and where every community member takes responsibility for preventing and responding to harm. We are redoubling our efforts to raise awareness about sexual violence. This includes taking preventative measures such as encouraging healthy relationship dynamics and consent practices that can help to limit harm.

We are creating and sharing strategies that educate and transform our community into a culture of consent, safety, and well-being. At OWS, these strategies currently include support circles, counseling, consent trainings, safer sleeping spaces, self-defense trainings, community watch, awareness campaigns, and other evolving community-based processes to address harm. We encourage survivors to connect with support and advocates, and to access medical, legal, and social services, as well as available community-based options, many of which are listed below. We stand together as a community to work towards the prevention of sexual violence and harassment, and to provide unwavering support for anyone who has been assaulted. We commit to creating a culture of visibility, support, and advocacy for survivors, and of accountability for people who have committed harm.

With hope and solidarity,

Members of the survivor’s support team at Occupy Wall Street

Below we have included a list of trusted local resources that provide a range of options for survivors and allies.  We recommend the services of these organizations, but we have not contacted them for endorsement of this statement.