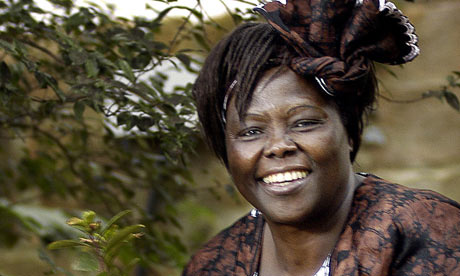 Wangari Maathai has been an inspiration to many for her unflagging passion and commitment to women’s rights and environmental justice.  She was responsible for founding one of the most prominent transnational environmental groups in the world today – the Green Belt Movement (GBM). The organization was founded in 1977 and provides financial incentives for women to plant and nurture native species of trees. Since it was founded, the GBM was responsible for planting more than 30 million trees in Africa. Eco-feminists cite Maathai’s activist work to bolster their arguments concerning the gendered implications of environmental degradation–for it is women who are disproportionately impacted, as they are primarily responsible for tending the land and gathering products from forests, particularly in the Global South.

Through her work, Maathai addressed the low economic status of women in Kenya. Her activism, however, was not always warmly received, and Maathai’s work in transforming gender relations often left her accused of unwomanly behavior. Kenyan President Daniel arap Moi once called her a “mad woman” and “a threat to the order and security of the country.” In her book “Unbowed” she writes about the systematic gender discrimination she faced at every step, ranging from receiving no housing, pension, or insurance benefits at her job as a university lecturer to having her own husband divorce her saying that she was too strong-minded.

The United Nations has reported that as many as 900,000 women have improved their social and economic position by their involvement in the Green Belt Movement. Among many other awards and honors, including winning the Right Livelihood Award in 1984 and in recognition of her innovative work to promote sustainable development and environmental conservation twenty years later, Maathai became the first African woman to win the Nobel Peace Prize in 2004. Shortly after winning the prize, she and other women Nobel Peace Prize recipients (such as Shrin Ebadi) formed the Nobel Women’s Initiative to support women fighting for gender justice around the world.

Although she may have started by focusing on planting trees, Maathai’s environmental justice activism was much more expansive in its scope. She believed that environmental degradation, manifesting through poor health, destruction of livelihoods, general environmental threats, and political exclusion, robbed individuals and communities of the ability to live fully functioning human lives. Moreover, Maathai linked environmental and key social and political issues. When she fought against the Kenya government’s plan to build a huge commercial development in Uhuru Park, including a large statue of President Daniel arap Moi, she challenged corruption as much as upheld ideas of environmental protection.

In several important ways, Maathai helped the global community reframe its ideas concerning conflict and insecurity. She insisted that the seeds of peace could only be found in sustainably managing our environmental resources and in ameliorating the conditions that cause poverty and insecurity. She recognized that many more people in the world face insecurity due to a lack of water and food than because of terrorism. She believed the devastating assaults of climate change, coupled with drought and deforestation, were much more of a priority for the majority of the world’s population.

On a personal note, I had an opportunity to take my students from Kenyon College to hear her speak at the College of Wooster in October 2009. We were all so incredibly impressed and moved by her enthusiasm for global environmental issues. During the Q&A sessions, one of my students asked her about her thoughts on the much-anticipated Climate Change Conference that was to take place in Copenhagen at the end of the year.  In response, she suggested that individual citizens put pressure on their political representatives to do something about climate change. She spoke of the important leadership role that the United States needed to take to solve the environmental crisis. Many students spoke to me about how inspiring they found her talk and how they intended to get involved in more green initiatives around campus and put pressure on their local politicians to do more to solve the problem of climate change.

Wangari Maathai’s commitment moved countless people to take action for women’s rights and environmental justice. Her activism connected ecology and democratic rights not only to force a change in the behavior of the Kenyan government, but also to arouse the will of citizen activists around the world to demand such change.

Sonalini Sapra is an Assistant Professor of Political Science and Gender & Women’s Studies at Saint Mary’s College, Notre Dame. Her research and teaching interests are in Gender and International Relations, Environmental Politics, Transnational Feminisms, and Feminist Theory. Prior to returning to graduate school, she worked at a non-governmental labor rights organization in New Delhi examining the impact that international and national trade policies were having on India’s informal workers. She was the Andrew Mellon Post-Doctoral Teaching Fellow in International Studies at Kenyon College in 2009-2010. She can be reached at ssapra@saintmarys.edu