I did not attend Wednesday’s movie release of “The Help” from DreamWorks Pictures, based on the New York Times best-selling novel by Kathryn Stockett.  Why, you ask? Because I read the book.

Last week New York Times op-ed columnist Frank Bruni saw an advance screening of the movie and referred to it as  “…a story of female grit and solidarity — of strength through sisterhood.”  He wrote, “The book’s author, Kathryn Stockett, told me that she felt that most civil rights literature had taken a male perspective, leaving ‘territory that hadn’t been covered much.’” What neither Bruni nor Stockett acknowledge is that the real territory remaining uncovered is civil rights literature written by the Black women who experienced it.

I recently read The Help with an open mind, despite some of the criticism it has received.  I assumed the book would be racially problematic, because for me, most things are.  The novel opens on the fourth Wednesday in August 1962, at the bridge club meeting in the modest home of 23-year old, social climbing Miss Leefolt.  The plot unfolds when her “friend” and the novel’s antagonist, Miss Hilly, the President of the Jackson, Mississippi Junior League, announces that she will support legislation for a “Home Help Sanitation Initiative,” a bill that requires every white home to have a separate bathroom for the colored help. (10)

We learn early on that Miss Skeeter, the only bridge club lady with a college degree and no husband, opposes the idea.  By page 12, she asks Miss Leefolt’s maid Aibleen, “Do you ever wish you could…change things?”  This lays the groundwork for a 530-page novel telling the story of Black female domestics in Jackson.

The first two chapters were written in the voice of a Black maid named Aibileen, so I hoped that the book would actually be about her.  But this is America, and any Southern narrative that actually touches on race must focus on a noble white protagonist to get us through such dangerous territory (in this case, Miss Skeeter; in To Kill a Mockingbird, Atticus Finch).  As a Black female reader, I ended up feeling like one of “the help,” forced to tend to Miss Skeeter’s emotional sadness over the loss of her maid (whom she loved more than her own white momma) and her social trials regarding a clearly racist “Jim Crow” bill.

What is most concerning about the text is the empathy that we are supposed to have for Miss Skeeter.  This character is not a true white civil rights activist like the historical figure, Viola Liuzzo (April 11, 1925 – March 25, 1965), a mother of five from Michigan murdered by Ku Klux Klan members after the 1965 Selma to Montgomery march in Alabama.  Instead, Skeeter is a lonely recent grad of Ole Miss, who returns home after college, devastated that her maid is gone and that she is “stuck” with her parents.  She remarks, “I had to accept that Constantine, my one true ally, had left me to fend for myself with these people.” (81) Constantine is Miss Skeeter’s Black maid, and it’s pretty transparent that Stockett is writing about herself.  We learn this in the novel’s epilogue, “Too Little, Too Late:  Kathryn Stockett, in her own words.”

“My parents divorced when I was six.   Demetrie became even more important then.  When my mother went on one of her frequent trips[…] I’d cry and cry on Demetrie’s shoulder, missing my mother so bad I’d get a fever from it.” (p. 527)

“I’m pretty sure I can say that no one in my family ever asked Demetrie what it felt like to be black in Mississippi, working for our white family.  It never occurred to us to ask.  It was everyday life.  It wasn’t something people felt compelled to examine.  I have wished, for many years, that I’d been old enough and thoughtful enough to ask Demetrie the same question. She died when I was sixteen.  I’ve spent years imagining what her answer would be.  And that is why I wrote this book.” (p. 530)

It would have behooved Stockett to ask her burning question of another Black domestic, or at least read some memoirs on the subject, but instead she substitutes her imagination for understanding.  And the result is that The Help isn’t for Black women at all, and quickly devolves into just another novel by and for white women.

But when the novel attempts to enter the mindset of the Black women, like Aibleen or her best friend Minny, suddenly we enter the realm of the ridiculous.  Although Stockett’s writing shows her talent, her ignorance of the real lives of the Black women bleeds through.  Her Black characters lack the credibility reflected in Coming of Age in Mississippi, a 1968 memoir by Anne Moody, an African American woman growing up in rural Mississippi in the 1960s.  Moody recalls doing domestic work for white families from the age of nine. Moody’s voice is one of a real Black woman who left her own house and family each morning to cook in another woman’s kitchens.

So instead of incorporating a real Black woman’s voice in a novel purported to being about Black domestics, the Skeeter/Stockett character is comfortingly centralized, and I can see why white women relate to her.  She is depicted as a budding feminist, who is enlightened and brave.  But in reality, she uses the stories of the Black domestics in the name of “sisterhood” to launch her own career, and then leaves them behind.  In my experience, the Skeeters of the world grow up to be Gloria Steinem.

In a certain sense, The Help exemplifies the disconnect many Black women have felt from Feminist Movement through the second wave.  For 20 years, I read accounts of Black women who were alienated from that movement primarily populated by middle-class white women.  Black women have asserted their voices since the 1960s as a means of revising feminism and identifying the gap previously denied by the movement and filled by their minds, spirits and bodies. Yet, because I was born in the midst of the second wave and the Black Feminist Movement, I never felt alienated, myself, until the 2008 Presidential election.

It started with the extremely unpleasant showdown between Gloria Steinem and Melissa Harris Lacewell, (now Perry) surrounding Steinem’s New York Times op-ed about then-Senator Barack Obama. This was followed by the late Geraldine Ferraro’s dismissive comments that Senator Obama was winning the race because he was not White. “If Obama was a white man, he would not be in this position. … He happens to be very lucky to be who he is. And the country is caught up in the concept.”

And even now that we have an elegant Black First Lady, I’m troubled that our popular culture obsession is with the “largely fictional” book, The Help.  Sounds like an opportune moment for second wave feminists to engage in some serious deconstructionist critical analysis.

Once again, it seems that the sisters who make up the “sisterhood” are left to fend for themselves, while second wave feminists like Salon.com writer Laura Miller give a tepid analysis of the legal controversy surrounding the novel.

In February, Ablene Cooper, an African-American maid and babysitter working in Jackson, Miss., where “The Help” is set, filed suit against Stockett. Cooper accused Stockett of causing her to “experience severe emotional distress, embarrassment, humiliation and outrage” by appropriating “her identity for an unpermitted use and holding her to the public eye in a false light.”  In her article, “The Dirty Secrets of The Help,” Laura Miller writes:

“Cooper’s lawsuit does manage to unearth two remarks from the novel in which Aibileen seems (arguably) to disparage her own color, but they are tiny scratches on an otherwise glowing portrait.”

Here’s one of those “tiny scratches” posted on ABCnews.com.

“That night after supper, me and that cockroach stare each other down across the kitchen floor,” Aibileen says in the book. “He big, inch, inch an a half. He black. Blacker than me.”

Laura Miller sees no problem with this, and focuses more on the depiction of the white women in the text:

“Although it’s difficult to believe that anyone would feel “outrage, revulsion and severe emotional distress” at being identified with the heroic Aibleen, her employer, Miss Leefolt, is another matter. A vain, status-seeking woman married to a struggling, surly accountant and desperately trying to keep up appearances in front of fellow members of the Jackson Junior League, Miss Leefolt is the one who insists on adding a separate “colored” bathroom to her garage. She does this partly to impress Miss Hilly, the League’s alpha Mean Girl (and the novel’s villain), but she also talks obsessively about the “different kinds of diseases” that “they” carry. Furthermore, Miss Leefolt is a blithely atrocious mother who ignores and mistreats her infant daughter, speaking wistfully of a vacation when “I hardly had to see [her] at all.” Like all of the white women in the novel (except the journalist writing the maids’ stories), Miss Leefolt is cartoonishly awful — and her maid has almost the same name as Stockett’s sister-in-law’s maid. Fancy that!”

Of course, Miller insinuates that the real life Aibleen lacks the agency to have initiated the lawsuit, and that Stockett’s sister-in-law surely coerced her.

I have never met the real-life Aibleen, but if she went to the grocery store yesterday, she would have seen that The Republic of Tea introduced its new limited-edition The Help Tea – Caramel Cake Black Tea, and despite her educational background, she would have understood that she won’t get a cent of the royalties.  According to the website, The Help Tea – Caramel Cake Black Tea, is inspired by Aibleen’s best friend Minny’s famous caramel cake. The tea is being marketed to drink with friends in celebration of a movie where a “remarkable sisterhood emerges.”

What no one wants to acknowledge is that the fictionalized Skeeter leaves the Black domestics in the South—similar to the white freedom riders during the Civil Rights Movement.  In real life, after appropriating the voice of working class Black women, profiting, and not settling out of court, Kathryn Stockett admits in a Barnes and Noble audio interview that even her own maid was not fond of the novel:  “My own maid didn’t really care for it too much, she said it hit a little too close to home for her,” Sockett reports seven minutes and 35 seconds into the 10 minute interview with Steve Bertrand.  So, in the end, The Help and the lawsuit are about white women who don’t want true sisterhood.  They just want Help. 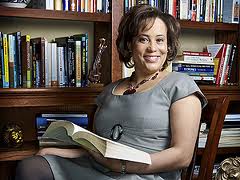 Duchess Harris, Ph.D., J.D., is an Associate Professor of American Studies at Macalester College, and an Adjunct Professor of Race and the Law at William Mitchell College of Law. She is author of Black Feminist Politics from Kennedy to Obama, and co-editor with Bruce D. Baum of Racially Writing the Republic: Racists, Race Rebels, and Transformations of American Identity.