of refusal to bow to the whimsy of busy tweezers.

From follicle to follicle, freedom unfurls.

Most inexplicable brow, most unpixelated.

Brow the embodiment of national glory.

weeping with dislodged fetus, with loss and forlornness.

Brow the dark secret of the fastidiously plucked,

Brow the prismatic lion in the wardrobe when you were expecting beige scarves.

Sing holy praises to the insistence of the brow.

Sit down and write a letter to the core beliefs of the brow.

Knit a sweater to the milagro-like votivity of the brow.

Conjure new words to praise the liftingness of brow.

Flamenco to the mural-worthiness of the brow.

Praise god for the untamability of the brow.

brow most perennial, most acanthus.

Brow the corpse that proves the path to the next.

Long live the flourish of the stalwart, seaward sooty gull in every self-portrait.

and parrots, perched beside the unwieldy, the emblematic.

like two black wings—signature smudges left by the pig

Clearly, I’m a reflection of the painter’s neuroses;

clearly, I have a toothache. Turn the canvas

sideways, at a 45-degree angle. Scan the dark swirls:

and you’ll see them, the buffalo and the lion. Twenty

animals in all, including a snake representing

envy, a leopard because its skin kills the wanting

of what we don’t have. I’m the Jolly Lady, wife

I’m idealized, the artist’s mother, the Madonna (a mule

nestles between my breasts—have you spotted

the ape?) Superimposed on a Chinese landscape,

My half-smile is the smile of enlightenment,

posing with Jackie and JFK, I was valued at $720 million,

six times the price of a Pollock or de Kooning.

Some have said that in my placid eyes tiny letters

my painter’s apprentice, but don’t buy it.

Forget the theories relating to my lack

of eyebrows and lashes, lost not from plucking

but the ravages of restoration. Housed at Versailles,

entwined myself in the Sun King’s cucumber patch,

his coveted Chambertin, scuffed around in beat-up red slippers.

When WW2 broke out, they wrapped me in waterproof paper,

whisked me to a land of poppies and castles. Behind

two layers of bulletproof glass, I live on at the Louvre,

where each year seven million spend an average

unfinished; I’ve been stuffed beneath a trench coat, smuggled

back to Florence. Doused with acid, stoned, pummeled

with insects; fumigated. I’m a miasma of optical illusions;

my paint is cracking. My visage excites the random noise

a smidgen neutral. You love me like you love your sphinx,

your flying saucers, your Area 51; I’m your koan,

your inscrutable floozy, your syphilitic conundrum,

because I render you agog, aha-less, uncomfortably mum. 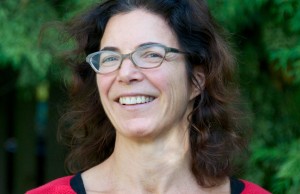 Martha Silano is the author of four books of poetry, including The Little Office of the Immaculate Conception and Reckless Lovely (both from Saturnalia Books). She also co-edited, with Kelli Russell Agodon, The Daily Poet: Day-By-Day Prompts For Your Writing Practice (Two Sylvias Press 2013). Her poems have appeared in Poetry, Paris Review, Beloit Poetry Journal, Prairie Schooner, Kenyon Review Online, Crazyhorse, American Poetry Review, Orion, and The Best American Poetry 2009, among others. Martha edits Crab Creek Review and teaches at Bellevue College.