“And God is the Water”: Reflections on the EPA Spill, Power, and the U.S. Southwest – The Feminist Wire

Home / Activism / “And God is the Water”: Reflections on the EPA Spill, Power, and the U.S. Southwest

“And God is the Water”: Reflections on the EPA Spill, Power, and the U.S. Southwest

By Guest Contributor on September 3, 2015

I gaze with profound horror upon pictures of the San Juan and Animas rivers, flowing a sickly yellow and orange through Totah, the Navajo/Diné word for the place where I was born; also known as Farmington, New Mexico.(1) I compulsively read news story after news story about the EPA’s “accidental” leak of three million gallons of toxic waste, containing high levels of lead, arsenic, and other metals that turned these rivers yellow; originating from the Gold King Mine in Silverton, Colorado. I call my folks, who still live in Farmington. My mother says that they can’t drink the water at home until the EPA gives them clearance; emergency water stations have been set up around town. “I do not understand this world,” my mother, who is in her seventies, says with immeasurable grief. As I grapple with how people will cope with this ecological disaster, the ending line of a beautiful poem by Lyla June Johnston, a Diné writer from New Mexico, fills my mind: “And God is the water.” 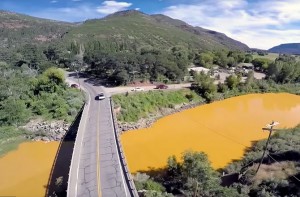 The San Juan and Animas do, indeed, hold godlike power over life and death. These waters are literal arteries that connect what is now known as the “Four Corners” (Southwestern Colorado, Northwestern New Mexico, Northeastern Arizona, and Southeastern Utah) and/or sustain millions of people currently living upon occupied Diné, Hopi, Ute, Zuni, and Apache/Ndeh lands—including my own working-class Anglo family. My father was a miner and, later, a middle manager for one of the many transnational resource extraction companies insatiably seeking coal, uranium, natural gas, and oil in the Four Corners: corporations that count Halliburton among their number and that leave a trail of death in their wake. Specifically, working in collusion with corrupt Anglo and tribal politicos behind closed doors, these corporations pollute and destroy the U.S. Southwest in the tired, suicidal name of “development” and “progress.”

I call my best friend, whose family also lives in Farmington and whose uncle still works for one of these companies. I ask him what he thinks about the spill. He wryly replies, “I doubt there would have been an alarm if the water didn’t turn bright orange.” Gold King Mine has been leaching chemicals into the Animas since the late 1800s. My friend continues:

When you think about all the various toxic plumes underneath all of the oilfield businesses in Farmington…a little arsenic and lead is the least of your worries. My uncle was just telling me about the drums of “oil” from the refinery that were spread on parking lots all around town as “asphalt” that were truly benzene leaden waste—washed right off into the ground water. Lead? That’s like a vitamin!

Before dismissing my friend as cavalier, note that this quote illustrates the hard sense of humor that many people from this area develop as a sort of coping mechanism—maybe because there is so very little that we can do about our exposure to toxins like benzene. Specifically, due to the geopolitical immobility fostered by poverty, some of our families engage in what I might call “survival bargaining”—starvation or working for the corps that pave parking lots with benzene. There are simply not a lot of options for gainful employ in Farmington outside of resource extraction and/or the weapons industry relying upon this extraction (i.e., uranium) to build the instruments of contemporary war.

Currently, my friend is dealing with the grim fact that his uncle has Stage IV colon cancer and we suspect that this illness is not the result of chance. As the World Health Organization notes:

Human exposure to benzene has been associated with a range of acute and long-term adverse health effects and diseases, including cancer and aplastic anaemia. Exposure can occur occupationally and domestically as a result of the ubiquitous use of benzene-containing petroleum products, including motor fuels and solvents.

In other words, benzene is a deadly poison. The fact that my friend’s uncle was exposed to this poison because of his job certainly did not help his current health situation. Consequently, some of us from Farmington watch helplessly as our loved ones sicken and/or as we deal with our own strange medical issues: issues that most likely result from the way that corporations do business in the U.S. Southwest. For example, we wonder if our health problems might stem from the fact that Farmington is right next door to Gallup, NM: a town on the Diné reservation an hour and a half away, near the site of the Church Rock uranium spill. This spill, which resulted from corporate and governmental negligence, released more deadly radiation than the Three Mile Island disaster. Sadly, the Church Rock spill is only one example of the many acts of corporate-sponsored genocide informing life in the Four Corners. This is to say, with a permanently broken heart, that what is now being dubbed the “EPA Spill” is the violent end result of how the U.S. Southwest is treated every single day by contemporary corporate/governmental entities.

However, as argued by a fellow activist from Farmington, the government/corporations operate with such impunity in the Four Corners because this region is a “throw-away land” within the context of contemporary colonialism. As Simon Ortiz (1992:5), former uranium miner, poet, and Acoma/Aacqu tribal member from Northeastern New Mexico insists, European regimes of governance, “beginning with Spanish colonization in the sixteenth century” and continuing with “American occupation in the 1840s,” long transmuted the U.S. Southwest into a “national sacrifice area” to accumulate capital and consolidate Eurocentric power. Thus, I would argue that the “EPA Spill” is not so much an “accident,” as it is the natural outcome of how power is expressed in the U.S. Southwest: power that hinges upon some of the same deadly, socio-corporeal and economic schematics left in the wake of European settler colonialism.

For example, Ortiz traces how, in 1680, “the Pueblo Indian people rose against the civil religious and military rule of the Spanish” to successfully stop the “theft of land and resources, slave labor, religious persecution, and unjust tribute demands” violently and explicitly leveled against indigenous peoples of Northeastern New Mexico: the Spanish were literally ejected from this region until 1692. Ortiz poignantly continues: “Three hundred year later, some of these same conditions” once inciting the 1680 Revolt still exist, “as a result this time of a modern-day American society” (1992:31).

In particular, Ortiz argues that resource extraction accomplishes many of the racist goals held by the Spanish Crown: theft of indigenous lands and resources, the implementation of a labor system relying upon exploitation of indigenous men, and genocide vis-à-vis acts like the Church Rock spill. In other words, modern resource extraction relies upon established racialized, colonial perceptions of U.S. Southwestern lands and peoples as that which can be exploited unto death in order to fatten imperial coffers: coffers that now sustain a global, capitalist oligarchy structured by Eurocentric power.

Furthermore, as illustrated by my best friend’s story earlier, class plays a powerful role in the ordering of Eurocentric colonial power in the Four Corners. Specifically, it will be mostly poor people who suffer the mortal consequences of inhabiting national sacrifice areas. Thus, as Ortiz (1992:325) famously argues:

The American poor and the workers and white middle class […] must understand how they, like Indian people, are forced to serve a national interest, controlled by capitalist vested interests in collusion with US policy makers, which does not serve them. Only when this understanding is attained and decisions are reached and actions taken to overcome economic and political oppression imposed upon all of us will there be no longer a national sacrifice area in the Southwest.

Consequently, poor and working-class Anglos need to come to rapid political consciousness about our position in the European colonial pecking order. We are by no means exempt from the regimes of death brought with our elite as invaders of the U.S. Southwest.

In addition, colonial formulations of gender identity and sexuality are used to consolidate Eurocentric power in the U.S. Southwest. As Andrea Smith argues in Conquest, the historic, systemic rape of indigenous women at the hands of colonial agents—in the eugenicist name of “bringing to heel” so-called “deviant” sexualities—legitimized the “rape of the land” as an ongoing project in the Americas. Specifically, Smith (2005:55) maintains:

The connection between the colonization of Native people’s bodies—particularly Native women’s bodies—and Native lands is not simply metaphorical. Many feminist theorists have argued that there is a connection between patriarchy’s disregard for nature, women and indigenous peoples. The colonial/patriarchal mind that seeks to control the sexuality of women and indigenous peoples also seeks to control nature.

In short, European colonial heteropatriarchy is a powerful system of governance and thought that relies upon racist, classist, and sexist logics to control people and the lands they inhabit.

Given the sociocorporeal and economic conditions of modern governance I briefly outline here, a complete reconceptualization of power—i.e., our relationship to the land and to our very bodies—is required to stop the painful death march that many peoples living in the U.S. Southwest find ourselves on. As indigenous peoples, people of color, and other activists have argued for a long time, occurrences like the “EPA Spill” happen with such regularity due to the raced, classed, heteropatriarchial, and gendered mores of European settler colonialism: mores which transmute regions such as the Four Corners into national sacrifice areas to be exploited following the whims of contemporary colonial empire—transnational corporations and their wealthy stakeholders of all nations and creeds.

To dismantle these mores, then, is to reposition the U.S. Southwest as deserving of life and/or its lands and peoples as vibrantly alive. Of course, what I am arguing is by no means “new.” In fact, many indigenous activists are promoting the vision of power outlined here as part of their important work to challenge regimes of death in the Four Corners.(2)  Indeed, drawing from the wisdom of friends, family members, scholars, poets, and activists I cite herein, I seek to gently remind us all: God is the water. Without water, there is no life. Such knowledge, grounded ultimately in terrestrial and biophysical reality, can continue to be a powerful rallying cry for peoples of the U.S. Southwest who no longer wish to live under the cannibal dominion of this governmental regime; who never, ever again want to see the Animas and San Juan run yellow and orange.

1. Totah roughly translates to “place of water” and is a word that highlights the significance of Farmington in terms of its arid, high-desert surround. Many Anglos living in Farmington know this word—and even basic greetings in Diné—because this town of around 46,000 people is surrounded on all sides by the Navajo/Diné reservation. Thus, Farmington’s commercial sector is sustained almost entirely by reservation dollars and some of the businesses in downtown Farmington have Diné names. Farmington is also notorious for the acts of physical/sexual violence committed against indigenous peoples, women, poor Anglos, Latin@s, African American, and LGBTQ folks; at the hands of the police and/or Anglo men. Some of this violence became the subject of a popular book in the early 1990s, The Broken Circle, and remains the focus of investigation by the New Mexico Advisory Committee to the U.S. Commission on Civil Rights. 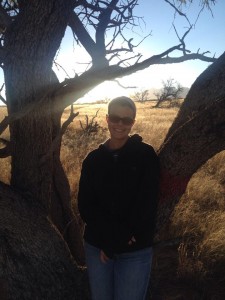 Katherine Freeman is a Gender and Women’s Studies PhD Candidate at the University of Arizona in Tucson, Arizona. She holds an MA in Applied Cultural Anthropology, earned from Northern Arizona University in Flagstaff and a BA in Cultural Anthropology, with a minor in Women’s Studies, from Fort Lewis College in Durango, Colorado. Katherine is dedicated to the production of scholarship and critical social theory that can be utilized in some way to improve contemporary socio-economic conditions.