I am on tiptoe scanning our tallest bookshelves for something to pack to read on the plane.  I am scanful, tippy-toed: a girl without boots.  I am shorty.  I want to read something great, as in literary, and beautiful and daring, and something hobnailed by happy sex in it.  And I am on tippy toes like coming when it occurs to me that there may be no great literature with happy sex in it, something Tolstoy didn’t say, not to brag.  The sex I myself want right now is not happy sex at all: I have happy sex: happily married, it’s happily available to me for the taking.  I have family sex, and my family sex is happy in the same ways it always is: too available.  What I really want is not sex at all but the lack of sex, the surplus of tension—charged, fraught, keep-away.  And then vanquished, victorious, wrong-headed.  On tiptoes and against the tallest of bookshelves.  The kind of sex that doesn’t end badly or sadly.  The kind of sex that doesn’t end.  The kind that perhaps doesn’t exist, either, because this is the sex of the first encounter and what comes before it.  After the first encounter there is just racism and nationalism and colonialism.  After the first sex, if it continues and gets happy then it is love, or a relationship worked out between consenting adults, and mostly the bookshelves and the tippy toes cease.  If the sex does not continue or does not get happy, then it is not love, and it’s often over, or it’s sad or bad and that’s not the kind of not-sex I want to read about in great literature or have.

Mood: tongue-splayed, goggle-eyed lust, like the wolf in the Tex Avery cartoons.  Aimed at the world.

I am unhappy in my own way: I am as happy as a cheerleader, a punk rock cheerleader, which is a sobriquet that goes around a lot in my circle.

Here for: the duration.

Here for: the lies and laws of attraction.

In this, your first lift-the-flaps book, I teach you to look for Goo, and call him your friend.  My friend Goo.  Goo, swimming in the diesel fuel.  You are a girl who likes fuel, garbage (though it worries you), basketball, hockey pucks (which crack you up), tea parties, butterflies, gingerbread men.  Pee-you.  You are a girl when I clip you with a bow, which I always do, a permanent metal plate with satin adorning your head.  Goo likes to wear green underwear, underwear made of diesel fuel.  You are a girl whose eyes have grown in.  You look like your father except you are beautiful.  So says the girl at the store.  I know a secret or two about Goo.  Gee, gee.  Gee gee gee.  Each letter makes a special sound, guh guh gee.  Twenty-six genders in the alphabet.

Let him take you down to the grey-green lake.

(This was the life held inside your first book.

This was your red life, the one that was magic.

This was your state.  You went up, and then over.)

You are here now, at the lake.

Let the teacher be central, like a good idea.

Let him run you around inside God’s fogged-up terrarium.

You can be a tiny, green-legged creature.

He’d let you pet his head if you liked.

But you don’t.  You run around the lake.

You slow and slow for him.

(The world of your first book is a grey one.)

Later, you drive him to a bad slice of town.

You stop at the fog-frosted market for cakes.

You let him think you share his red memory.

Let him ask you, in theory, to marry.

Let him ask you to have his child, as you once let another teacher ask you.

Then, your yes cracked the grey sky like red birds.

Your yes is false, a wholesome and benign trick.

(No one means what they say.)

Let him drive you around.

He has no children, no wife.

You are no child, no wife.

But twice now you’ve been the girl in knee socks, thighs bare.

You are here, a red paper heart men find pretty.

Let yourself be a magic trick.

(You will later settle it up with God.) 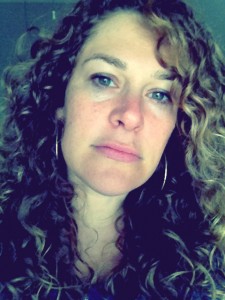 Arielle Greenberg is co-author of Home/Birth: A Poemic; author of My Kafka Century and Given; and co-editor of three anthologies, including Gurlesque. Both her creative and scholarly work is often about the politicized intersection of gender, ecology and radical aesthetics, and especially recently, sex-positivity. She lives in Maine and teaches in the community and in Oregon State University-Cascades’ MFA, and writes a column on contemporary poetics for the American Poetry Review.

Related Itemsbody politicsfeminismPoetrySexSexuality
← Previous Story From Corpses, Artworks and Dreams of by Raha Namy
Next Story → 3 poems by Sarah Kortemeier