I want to think like a magi; as stones underwater reflect grief. How images capture tone, and temperature of what is glimpsed. To glimpse why the root is made desperate by inability of its capture. Why, for instance, the word “woman” holds its own intention. One day on the street I found a fissure. I thought it was my sex. I thought it looked like the sea. An amoeba. I was not afraid to be seen. I was afraid to be dismembered. Do you see? The scene is one of red pooling into clear water. Men want to see you bleed, my mother said. Like a gutted fish, she said. Like a submerged memory. On the surface of the water I see an article. Perhaps the nuance is unintentional. Is it a verb? Is it a noun? The way female bodies surface. But I like the way a woman looks possessed, like a new organism under water.

“We must move on to the rhetoric of women, one that is anchored in the organism, in the body” (Duras). Pushed back by the flood of a veiled history. The earth. A monotonous violence. The error.  For we have not learned a thing. The pulse of testimony a vow to dream the intention. The pulse of testimony no longer requires illumination. It is illuminating this polished shore to hopefulness. Witness here, and answer. What is the female body’s landscape? What is the rhetoric of her landscape? A shore. A margin. Coral reef. A rift. A fault. Yes, a faultline. Where land meets shore. A divide occurs. Where continent advances and deposits its silt. A slit in the I. The essence of an enemy felled. It is not a matter of passion. Storms, impoverishments already revealed in Scripture. It is to split the body of the body. To treat it as if it were a condition.

They say if you are a woman you are pulled by the tide. They call you a lunatic, hysterical because the moon, full, makes you bleed. They suggest a hysterectomy. They suggest you stop troubling yourself with a vote. There is no need for a voice when you have an animal between your legs.

The animal that is my sex is not a novel. This is a novel. This caused a rhizomatic membrane. I am faltering here. In the white snow of the white page. Yesterday I watched a Tarkovsky film in Russian. The translation was “look how peculiar the sky. The sky.” I meandered back inside the doorway just as it began to pour. All of the grain in the field writhing. I struck the yellow leaves with my fist.  I struck the grey sky and the mud beneath my feet. I don’t know what being human means. Is it to have eyes? Here is the ground, the field. The air around me a room. A room that pulses and heaves. The light, clear. The light, not yellow. My breath, not yellow or clear. The words, leaves upon my breath. The turning of the seasons fall off of my mouth. My mouth lingers. The sun sets. Some animal burrows its dark fur inside this sentence. 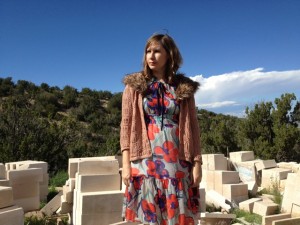 Andrea Rexilius is the author of Half of What They Carried Flew Away (Letter Machine, 2012) and To Be Human Is To Be A Conversation (Rescue Press, 2011). She is an Assistant Professor of English at Naropa University’s Jack Kerouac School of Disembodied Poetics, where she is also the Summer Writing Program Coordinator, the Editor-in-Chief of Bombay Gin Literary Journal, and the Co-Founder and coordinator (with Michelle Naka Pierce) of the biennial conference [Dis]Embodied.

“I want to think like a magi” was first published by the Academy of American Poets in 2013.