Dismantle: Let Me Break It Down – The Feminist Wire

Home / Uncategorized / Dismantle: Let Me Break It Down

Dismantle: Let Me Break It Down 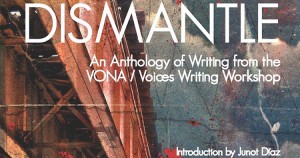 The first anthology of creative writing by students and faculty of the Voices of Our Nation Arts Foundation is called Dismantle.   Following in the tradition of the Cave Canem poetry foundation and the Kundiman collective, a set of voices of writers of color who have shared workshop space, if not at the same moment, then as part of the same tradition, share space again, in front of all of us, between the covers of a book.

When editor/publisher Marissa Johnson-Valenzuela asked me to review Dismantle I was excited to read it.  Many friends, cherished colleagues and writers that I respect have attended and taught at VONA’s annual summer workshop.   Of course, before I was able to get this review out, Junot Diaz’s essay about racism, retention and rejection in MFA programs, which also serves as the introduction to this book was published in a condensed version in the New Yorker on its own and sparked its own discourse.  Junot Diaz is one of the founders of VONA.  So it makes sense that his analysis and experience of the racism of MFA programs (which I will certainly not contest) and the role his experience and understanding had in creating the urgent motivation to create a space like VONA, centered on the experiences, and careers of writers of color and committed to an understanding of literature that eschews universalism for the transformative specificity writers who confront systems of oppression can address in their work is relevant.   But while the introduction may introduce the need for VONA, I am not sure it introduces the book itself.   The question what is VONA for? and  the question what does this first anthology of work by VONA participants do? has a lot of overlap, but may not be the same.

Let me break it down.   I do not think this anthology dismantles, if the thing to dismantle is the reproduction of the racist machine of the literary industry as we know it.  I do not think VONA itself dismantles that either.  But maybe that is not the object.  Maybe the object is to dismantle barriers to participation in the machine.    The introduction critiques the MFA and its harmful impact and lack of accountability to people of color.  But it doesn’t seem to suggest that the institutions should not exist.  It simply offers VONA as an example of what it would be like if writers of color were affirmed, supported and had a critical mass in programs that would be structurally the same, but filled with the brilliant empowered participation of people of color instead of the tokenized marginalization of people of color and the retraumatizing narrative that real literature is so universal that it can only be a blinding bright white.

The preface offers the book, not as a wrecking ball, but as a celebration of the work of VONA writers and an insistence on the validity of the literature VONA seeks to promote.  The preface frames the book as a vehicle to help “VONA reach the world.” (10) In the Outword the co-directors of VONA continue a narrative that emphasizes what they want to do: “transform and appreciate American literature that cannot always be seen,” while reminding everyone that “we have a canon.” (259) And finally, the acknowledgements confess that the “only mission” of the book is to “exhibit the range and beauty of the VONA/Voices workshop and larger community.” (261)

Dismantle what? Let’s try some other verbs.

What would it look like if there was an MFA workshop filled with people of color?  What if in the middle of professional creative writing workshops facilitated by professional and well-published faculty, the emotional reality of the work of writers of color and the lived experiences that compelled the work were validated and seen as a resource instead of shunned as an inconvenient and irrelevant difficulty?  VONA seems to suggest that people of color should have workshops, and paths to publishing, and access to the structures that exist for writers to publish their work and win awards and probably teach some day.  To me this anthology doesn’t say take it apart. It says watch us fill this up.  Watch us fill our own classrooms, and our own auditoriums.  Watch us.  Watch us fill the pages of this book.  Watch us remind everyone that America has always been full of people of color. Watch us make  the occupation of our communities and the colonization of the mind visible.   Watch us make and value what the dominant logic of the literary industry says is not valuable.

If someone (else) did go about dismantling MFA programs and professional development programs and award panels and publishing houses and “BEST  (insert genre here of whatever year)” anthologies that practice the insidious racism of just seeing race as irrelevant, we would want something better to replace it with.  Maybe VONA’s creation of relatively autonomous workshop spaces and books filled with and accountable to the work of writers of color offers part of that replacement.   In case.

But if no one does the dismantling, if the consensus is that the normative structures through which writing reaches a market should and can continue to exist then there should be safe spaces where people can grow strong and vent loudly.  There should be spaces that fortify us for the fight.  There should be spaces where all the students and the faculty are writers of color.  Where all the pieces in the anthologies unapologetically exist in a world where race exists.  To grow power for the hard work of participating in what exists.

Paper. Though that paper will not be money.  Stack publications.  Stack paper to write on.  Stack hours in the day to write.  Stack residencies and recommendations.  This anthology offers another publication or maybe a first publication to its authors.   Actually it doesn’t seem to be offering a first publication to many.  About a fourth of the pieces in the anthology were published somewhere else already and according to the bios in the back of the book almost every author featured has published elsewhere, has won awards, many are even Cave Canem and Kundiman fellows already, so they have had access to other prestigious incubating spaces.  In fact, it seems that many of the participants in the anthology have also had access to prestigious majority white writing spaces where they are/were tokenized.  The anthology offers its participants another achievement.  A chance to get their weight up in a racist industry that even print on demand and e-readers cannot dismantle.

In my view, the most powerful action of this book is its gathering.  And although this is the last verb that I am offering, it is the most important.  Clearly gathering is important for VONA which exists through its creation of a space for writers of color to gather and gathering these pieces was important for everyone who worked on this book. VONA is a site of community-building first and foremost and I benefit from the confidence and example of the participants and even from the VONA facebook group which offers opportunities for writers.   The least inspiring pieces of the book seem to prioritize an eavesdropping racist who somehow accidentally got in earshot, but those are the exception.  The majority of the pieces in this book do the powerful work of speaking not to a market but in a gathered and gathering community.

It is beautiful to find a gathering space.  This anthology gathers genres and generations for the shared practice of illuminating and valuing the necessary work of creative writing, of affirming the fact people of color do and must create a world of words in order to continue to exist.   I affirm the value of a space where Nikky Finney’s 1985 poem “The Sound of Burning Hair” about the bombing of Osage Avenue and the radical black MOVE organization and Cynthia Dewi Oka’s recent poem in honor of Nelson Mandela “Poem for Prisoner #46664” can share space across time and reflect the value of intimate critical love for those branded as terrorists.   It is a blessing to be in a space where Ching-In Chen’s multivocal experimental poem “Confessional: Hijacked” can draw on a protest song, news coverage of direct actions and a manifesto right near the audacity of Rae Paris’s “Leaking Bodies” that includes a beautiful footnote salvo into the discourse of anthropology in the name of Sartje Baartman in the midst of a short story about sex, loss and the Bodies exhibit.  It is wonderful to see writers of color and ther work living together in their accountability and boundary pushing.  A reader has the opportunity to look at these pieces, written in different contexts and different ways by different writers of color and to see them in relationship to each other.  This is a space that values the relationships between writers of color and I appreciate it.   And I appreciate the opportunity to relate to the work.

I appreciate the incubation spaces that give writers of color the opportunity to build life-changing and transformative relationships to each other in person and on the page.   I appreciate those people who emboldened by those loving spaces infiltrate and occupy literary journals, prize panels, MFA workshops and publishing houses and everything else that fuels the literary machine.   And I recognize the years of labor that it takes to offer oneself to the project of having a canon and illuminating the margins of American literature.  American literature and the institutions that maintain it will probably exist for quite some time.  And I don’t know what we would create if it someday actually got broken apart.   And maybe American literature should exist if it can possibly exist in a way that honors the transformative urgency of our ancestors.   Anthologies like this affirm the diverse participation of geniuses of color in the ongoing project of American literature, a project I myself study and participate in day to day.  In the preface the editor asks the readers to “recognize…the humanity-that is documented in this book.” (10)  Certainly she is not the first to ask for that.   And being documented is no joke in this day and age.  The writers collected here represent some of the most inspiring potential citizens of this thing some still call American literature.

But wouldn’t it be so gorgeous to dismantle it?