at the hands of a lover  boy  friend

husband  ex  take  your pick & all

the mouths are silent. Let’s be specific.

We’re trying not to be childish trying

not to invoke the memory of us

girls lined on one side of homeroom

boys on the other  play the game

of tit for tat hold inside our little fists

crumbled sheets of paper scribbled with

how many times we’ve had their backs

not because a poem asked us to

but because it came natural. If

a stereotype fits it fits now

we are tired women  so worn

lick their wounds for all lost

in pride & kingdom while women fall

are not enough hands pressed together

to gather this engine of loss  there is

no return  no recourse  no going back

each organ  each cell a burning pastime

circle with song. This is always the season.

As she parted my hair into four, I was a poem

in need of revision, too small for wigs like

she and the sweet-scented churchwomen wore

so I sat on the vinyl kitchen floor, my arms holding

tight to knees as she yanked away

nappy coils and pressed them into ponytails

of dark ribbon. On Saturday afternoons, the kitchen

doubled as beauty shop, the gas stove an incense burner

in a black lacquered chair, paid on lay-a-way from working

in the backs of restaurants and cleaning the insides

of toilets for white folks. It was honest work

for an honest person trying to make it in the world

and have a little left over. How happy she was

that one morning to place under the Christmas tree

my very own doll, one to sit with over the weekends

and do its hair. And I wonder how she felt when I

for a white one. I didn’t want something that needed

a grandmother, that needed hot combs and hair grease.

Sometimes you can watch a person age, the face

displays the cinematic reel of history, of white sheets

burnt cross and blackface. She returned the doll

and I remember her more silent than usual. At that

moment in the car I could have been any girl, from

el barrio or the hood or the rez, any brownish girl riding

families coated and gloved rushing with bags to and fro

snow falling and eyes facing forward, while each

wiper in the windshield drags itself along.

for all women finding themselves a country.

a country taken possession by a fist. the fist holds

history. the history of somebody’s mama.

the history of their mama’s mama.

for the numbers. for 50 bullets and black blood shed.

for the years at war and the next soldier dead.

for longing. for not the bullet. but broken skin.

for a hovering gospel. hand clap and holy ghost.

for the open mouth. not speak when spoken to.

for this naked black ass. kneeling before you. holy.

for a word this girl never claimed to be. 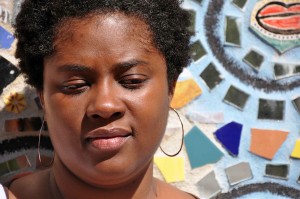 Niki Herd earned degrees in Creative Writing from the University of Arizona and Antioch in Los Angeles. She is the recipient of fellowships from Cave Canem and the Virginia Center for the Creative Arts. Her work has been supported by the Astraea Foundation and the Arizona Commission on the Arts, and has appeared in several journals and anthologies. The Language of Shedding Skin, her first collection of poems, was a 2009 finalist for the Benjamin Saltman Prize. In the following year, it was a finalist for the Main Street Rag Poetry Award and was published by the press.