COLLEGE FEMINISMS: Sexual Violence: Why It Can Destroy Us All – The Feminist Wire

Home / Black Women / COLLEGE FEMINISMS: Sexual Violence: Why It Can Destroy Us All

COLLEGE FEMINISMS: Sexual Violence: Why It Can Destroy Us All

I’ve been secretly dealing with a past sexual violation of my body for 10 years. I am a black man, and the most important bearing in this discussion is how and why it has taken me so long to finally reach a threshold of redemption — a space where I can begin negotiating what that moment in my life meant for me then and now.

When I was young, I was blackmailed into committing an act that I did not give proper consent to. In retrospect, after years of reflection and reading, I ask myself, what did it mean when Audre Lorde wrote that she couldn’t afford the luxury of fighting only one form of oppression? What did it mean when she wrote about how the intersectional forces of discrimination that appeared to destroy her blackness, woman-ness, and lesbian-ness, would in turn destroy all of us? And, what did her words mean for me as a little black boy navigating sexuality and gender in the South, who became a victim of sexual violence?

When we consider structural racism, sexism, homophobia, and patriarchy, we are not always cognizant of the range of persons on the margins who experience multiple forms of oppression, or that these very people often spend their lives either fighting those oppressions or positioning themselves to at least be drudgingly sustained.Unfortunately, mainstream conversations on sexual violence are divided by biology and thus construct male v. female dichotomies that ignore the ecological systems in place that allow rape, sexual assault, and violence to happen.

Simultaneously, due to narrow constructions of masculinity and femininity and limited ideas of who can be a victim and who cannot, these conversations negate how the abused may be subjected to illegitimate questioning and ridicule to the point of silence. Female victims may be silenced for telling a truth that indicts not only the perpetrator but also the community, and male victims may be silenced for breaking the man code. And both forms of suppression come with numerous penalties.

So, what does all of this mean for a little black boy growing up in the South who experienced sexual violence within a context of homophobic and patriarchal sexual exploration?

It means that there was no space for me to speak out against the oppressive force that ultimately seized me.

For a while, I imagined that what had happened was okay. I had consented to sexual behavior previously so I must have known that some sexual acts are seen as precursors to more sexual exploits. I couldn’t conceptualize the idea that I had been violated, but I also could not conceive possibly consenting to such acts. I worried about the shame my family and friends would feel towards me, and what it would mean to bear the burden of labeling myself a “sexual assault victim.” Is that what I am—or was? If so, how would this affect my relationships then and now?

I had so many thoughts at such a young age, and I carried that indignity with me for so long. I recently realized that my narrative was familiar. It was much like a recent report I read online about a sexual assault that occurred on a college campus. It was like the many stories of women who have been violated; whose bodies were abused; whose feelings were taken lightly. My story, though unique to me, was a manifestation of something cruel and ugly about the world, and that cruelty is often revealed as date rape and perpetuated in things like the gender pay gap, anti-reproductive rights, trans-youth homelessness, lack of access to education, misogyny, and much more. This cruelty thrives off of limited ideas of hyper-masculinity, whiteness, and heteronormativity, all of which have roots in essentialist and dominating sexist, racist and classist ideologies.

This cruelty eats us up and swallows us whole.

And anyone daring enough to oppose the script will face muzzling.

The constellation of factors that we either ignore or address in uni-directional ways, reportedly, by and large, impact women and girls throughout all ages and circumstances. These stories and statistics have led us, in some way, to reconsider the conversations that we have about constructions of gender and rape culture. However, it is the unspoken stories that should also give us pause. Because there are stories from men, women, girls, boys, trans-identified persons, and others, that have not been heard.  And since we have built a culture around silence and shaming, they may never be.

Furthermore, it is difficult for a woman, whether trans- or cis-gendered, to be multiply oppressed by race, sex, class and often violence, and it is problematic for her to aspire past glass ceilings and lack of support for education. To not only deal with the constant threat of rape but the sexist and racist drama that unfolds when reporting any of this to the authorities or her community. And it is difficult for her to negotiate her sexuality and body on her own terms.

To be certain, there are persons in this world who are able to, in various ways, resist systemic structures of violence. There are people who live on the margins and yet still maintain agency over their lives. They are daring and bold in a world that would rather see them erased. To this end, it is not always helpful to approach the situations of marginalized persons using a vulnerability model that ignores the personal strategies and diplomacies that they carry with them on a daily basis. However, we can still be real and open about what many others continue to face.

We all live in a white heteropatriarchal world and we all respond to this framework in different ways.

After thinking about all of this, I have come to the conclusion that Lorde and every other so-called “bra-burning” progressive feminist were right in the evaluation of why heteropatriarchy will eventually burn holes in and annihilate the things that male domination, male privilege, and essentialism hold most dear. And these systems, on any level, are not healthy and will not propel us — men, women, boys, girls, trans-identified persons, and others — into the future that we envision for our children. These systems—the aforementioned cruelty—can and will destroy us all because they do not give credence to a community that can be rooted in collectivism and sustainability. Consequently, we must continue to deconstruct these systems of oppression, and create, support and maintain spaces that allow for voices to be liberated and lives to be negotiated on the foundation of freedom, truth, and love.

We do this because it was and still is important for us to understand that — in the words of Fannie Lou Hamer — “nobody’s free until everyone’s free.” 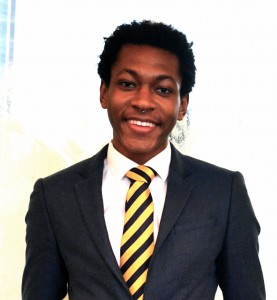 Kenneth Pass is a native of North Carolina and a senior at Morehouse College studying psychology. He is an undergraduate research fellow funded through the National Institute of Mental Health, a health policy intern, and serves as the Vice President of Morehouse College Safe Space, a gender and sexual diversity collective. Currently, he conducts research looking at how black males negotiate alcohol use and sexual-decision making, as well as how identity plays a role in the sexual health of black gay and bi-sexual men. He is also editing an anthology entitled The Amazingness of Knowing.