I have spent most of the last 20 years working with two main groups of disabled people: brain injury survivors and people who’ve been the victims of disability hate crimes.  I’ve had the privilege of working with, talking to, and advocating alongside about 5000 people in that time, mainly in Australia and the United States. Among those people, I could count on one hand the number of people who call themselves “crip” or want to be called “crip” by others.

Those who do choose the term “crip” as an identity tend to be privileged people. “Crip” is the new fashionable term among disability studies academics. It has become particularly trendy among those whose focus is literary studies.  However, I think that if they spent more time with disabled people, and less time thinking about disability in terms of textual analysis and narrative, they would have a different perspective.

This is not hard.  Find the women at your local domestic violence shelter and ask if any have suffered a concussion or brain injury as a result of domestic violence.  Listen to their gut-wrenching, painful stories. Feel their pain. And at the end of it, ask them “Now, do you mind if I call you crip from now on?”

Go to a meeting of your local People First organization, where those with cognitive impairments meet and support each other. You don’t have to even ask anyone whether they would mind if you used the term “crip.” Just listen to the noticeable absence of such terms in their discussions. They will talk about disability politics – about rights, responsibilities, and relationships – but they won’t use such a trite, trendy cliché as “crip politics.”

Or go to the local homeless shelter. Get to know the people there over time, as they won’t trust you if they’ve never seen you before. Learn about their personal histories. You can bet they will have been assaulted; hate crime and homelessness go together. And if you want to find out whether they’ve had mental illness, be very careful how you approach the topic. These are vulnerable people we are talking about. Socially isolated, impoverished, and struggling for basic survival. Learn to appreciate their dignity. If you call any one of them a “crip,” it’s you who was lost dignity, not them. 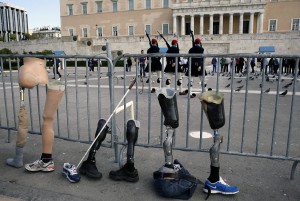 Presidential guards perform their ceremonial walk near prosthetics placed by Greeks with disabilities in front of the Greek parliament during a protest against new austerity measures on International Day of Persons with Disabilities in Athens. (Reuters)

That’s because the term “crip” has a long history – one that is racialized, classed, gendered, and gang- related. Being a “crip” is not a metaphor of being a ‘bad ass’ disabled person, as many privileged academics seem to assume. It’s an actual gang, and people who’ve made deliberate choices to avoid the violence of street life deserve respect and recognition for not being a crip.

For a privileged (usually White) disabled academic, calling oneself a “crip” might seem radical, if not trendy. But using such a term in the context of the safety of academia masks enormous embodied, classed, gendered, sexualized, racialized privilege.

This sense of using the term “crip” to mask privilege has struck me since I first heard the term in Robert McRuer’s book Crip Theory (2006). Realizing he was the only representative of queer studies and disability studies at an AIDS conference, he decided to “come out crip.” McRuer states “I came out as HIV-positive. I’m not, as far as I know, HIV-positive” (p.53).

It would have been far more powerful and ethical for McRuer to bring disabled people and those with AIDS alongside him to the meeting and to ensure that they had a place at the table. Or he could have organized a boycott of the meeting, given its exclusionary nature. But that would not have placed so much emphasis on “crip” as a performative practice. It would have demanded honesty, openness, respect, dialogue, and a recognition of privilege.

Privilege – that’s what the discussion of “crip” politics is always missing. It’s what so many academics have, and so few disabled people actually experience.

Being disabled is always fraught with danger. There is an ever-present danger of unemployment, poverty, social isolation, prejudice, violence, abuse, and hate crime. There is the difficulty of dealing with social welfare agencies and government bureaucracies, which exhaust and dehumanize you. Even if you get the disability pension, there is the ever-present threat of neoliberal cutbacks, or changes to social security policies that might see you lose your pension. People may spy on you to see if (they think) you are “truly disabled.” 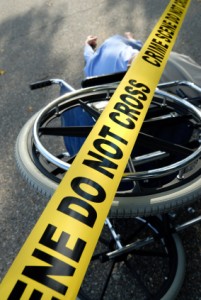 While many people will share their life stories, their hardships, triumphs, and tribulations with researchers, very few would speak with someone who told them, at the outset, “I write about crip politics.” This shows a massive disparity between the newly-emerging language of disability studies in the U.S., and the lived experiences of disabled people.

The British social model has been criticized at length for its simplistic impairment/disability divide. People’s lived experiences, their identities, and their embodiment are far too complex for such a simple binary. But what has been forgotten, in the rush to move away from the British model, is that these concepts came from a deep engagement with disabled people. It was a disability organization which came up with the impairment/disability divide: the Union of the Physically Impaired Against Segregation.

But claiming a “crip” identity as a nondisabled person is not a sign of being “radical.” It is a sign of being out of touch, of being privileged and feeling empowered to claim other people’s experiences as your own. This could be avoided if disability studies in the U.S. worked in closer partnership with a wide variety of disabled people in the community.

So if the term alienates so many of the people it is supposed to represent, what is its attraction? Partly, there is academic trendiness: new lingo is always seen as a sign of intellectual growth. It’s also a second-wave phenomenon: the basic premise of disability studies (that disabled people have different experiences which are often ignored, sidelined, or excluded) has been fairly well established. Second-generation theorists want to develop new concepts, explore new fields, and challenge the canons of the first wave.

This is fine to a certain degree, but this particular form of identity politics is deeply problematic. It is inherently rooted in physicalism. Physical impairments are simply one among many; there is no justification for prioritizing a term associated with their embodiment and their politics as opposed to any other. The discursive links between “crip” and “cripple” are dense and difficult; but that connection could be widely made and would alienate people who do not have physical impairments. It would be akin to imposing a “survivor” discourse on all disabled people – it may work for some people, such as brain injury survivors, cancer survivors, and psychiatric system survivors – but it would not resonate with others, such as people with congenital impairments, sensory impairments, neurodiverse people, and so on. There is no ethical justification for imposing this mode of representation on people with quite dissimilar bodies, minds, senses, and experiences. 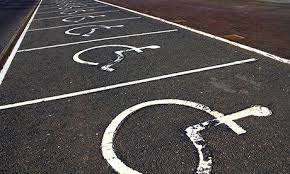 People with physical impairments have long been at the top of the disability hierarchy.  It is through their advocacy and political power that the universal sign for accessibility includes the image of a wheelchair. This pedagogical move – to center disability theorizing around a problematic notion most closely associated physical impairment – is equally disempowering for the vast majority of disabled people, who do not have physical impairments.

It is important to remember, however, that it is not all people with physical impairments who have dominated the politics and representation of disability. Far from it. Once again, it has been a question of privilege. While male wheelchair users dominated (at least the early stages) the independent living movement, the concerns of disabled women (particularly around abuse, domestic violence, rape, sexual assault, and hate crimes) have been far less prominent on the disability movement’s agenda. The concerns of people of color who are wheelchair users (concerns which include police brutality, safe and affordable public housing, opposition to government economic policies which create ghettos) are still barely acknowledged in either the disability movement or disability studies.

The promise of the disability movement is one that should excite everyone with a passion for social justice and equality – it involves valuing human diversity in all its myriad forms, seeing the interconnections between us all, working to reduce the barriers that unfairly limit the rights of some people, and creating a world where everyone can access and utilize society’s resources.

But that promise will not be possible if disability studies, or disability advocates, attach themselves to a discourse that so many disabled people find alienating, even oppressive. “Crip” politics may be a trendy terminology among privileged academics right now, but disabled people cannot afford the luxury of gambling on jargonistic fads to secure themselves social justice.

“Cripistemologies” may be appealing for academics who are interested in the power of a performative utterance and the viability of transgression. But imposing such an epistemological framework on disabled people is the height of disrespect. They don’t agree with it; they don’t want it; they (generally) find it oppressive or offensive.

This is the value of grounded research: millions of disabled people who would love to share their stories, to talk about what it is like to struggle at school, to share what it is like to be relentlessly bullied, or to discuss their worries about finding or keeping romantic partners. Millions more would love help in getting a job, or getting a better job. Others are desperate to find suitable, safe, housing, and would gladly share their stories about finding housing in return for assistance with applications, or help finding a better place to live. This – ideally – is the promise of disability studies. That it can be a positive force in the lives of disabled people, sharing the resources that are available to students and faculty with a community which is impoverished and socially excluded. That conception of disability studies – as an active agent for social change and equality – will not come easily. There will be serious resistance to it, from those with vested interests in the disability community and in disability studies. But that must be the challenge before us.

So, the next time I am exhausted from the community advocacy I do – with victims of hate crimes, or with brain injury survivors – and someone starts talking with me about “crip politics” – please understand when I say “Just … no.” 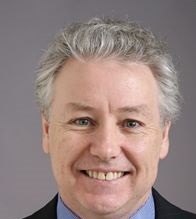 Mark Sherry is a brain injury survivor and Associate Professor of Sociology at The University of Toledo. His community advocacy has been focused on brain injury and disability hate crimes. His most recent book, Disability Hate Crimes: Does Anyone Really Hate Disabled People?, was published by Ashgate in 2010.  Prior to that, he had published If I Only Had A Brain: Deconstructing Brain Injury with Routledge in 2006.