Your survival taught me how to love – The Feminist Wire

Home / Health / Your survival taught me how to love

Your survival taught me how to love

By Guest Contributor on September 7, 2013

Two years ago at a conference I met a man who changed my life.  We were both in the audience and the panel was about sexuality and the African American community.  Of course, I wanted to be a fly on the wall to hear what would and wouldn’t be said! The experience was quite liberating.  We spoke of the pantheon of sexual communities, spirituality, disabilities, and those with illness.  The topic of illness naturally raised a brow.  I grew up during the time when AIDS meant death and your parents feared that if you came out loving someone of the same sex you too would die of it.  So to say the least, sex meant consequences.  It wasn’t until I got older and was exposed to larger discourses that I realized that illness and sex doesn’t equate AIDS.

This gentleman wasn’t suffering from AIDS, he was in remission from cancer.  Yet, in regards to sex, my upbringing was shrouded in guilt, fear, and consequences–it stained my mind.  The irony is I thought to myself:  “I have a graduate degree, I’m evolved, sex positive, living your truth, and F-em if they don’t love you attitude!”  However, when the topics of sex, illness, and black folk are put together it stopped me cold in my tracks.  Is it because statistically people of African descent are socially portrayed as the deficit population?  Society made me think that we are broke, un-educated, overspending, at risk of numerous health problems, and deemed hopeless.  However, this brother was different. He, on a cold overcast Friday in January, beamed with light.  He oozed confidence, radiance, hope, and love.  Not that Bobby Womack, Baby Face, En Vogue love but the love that promoters of peace have.  The kind of love that you know without a doubt that freedom fighters like Mother Theresa, Father Damian, Gandhi, Martin Luther King Jr., Malcolm X, Sonia Sanchez, Maya Angelou, Jessica Care Moore, and Father Michael speak, write, preach, and teach about.

He left me sitting there transfixed in the parallel universe that was happening write before my eyes. Naturally on a Friday, especially in January, I would have done laundry, graded papers, read, grocery shopped, slept in, taken a bubble bath, or drowned myself in a long play-list of “testify” and “get me right” music. Instead, I was there in that space in that moment.  I am a firm believer in things happening in divine order.  A couple of months later, I ran into him in SOHO. Now what are the odds that I would be in SOHO and that I’d run into him again? Something in me made sure that I spoke to him.  Normally, I would just keep going because the city teaches you to stay to yourself and only speak if you are sure you know the person.  This is only gives you a fifty percent return rate because sometimes, you still might get snubbed.

Unfortunately, this is the way that New York trains you to be.  This is in total contrast to my Midwest upbringing.  I’m from Detroit, which is like the south only with snow, abandoned factories, and a claim to Motown.  Besides, my stealth Scorpion nature doesn’t do snubbing very well.  We’d rather stay incognito. Yet, I took a risk and say, “hey we met at a conference back in January.” Not only did he stop, end his phone call, he reached out and gave me a hug.  I, like Carrie Bradshaw, said to myself “he must not be from New York.” I was right.  He too is a Midwest boy, Missouri to be exact. I practically did a perfect ballroom fall out to the floor complete with a duck walk when he said that. I responded “yo, I got family there, we even have family reunions there!”  We of course, had a moment and said only fate and the prayers of our mamas and big mamas could have linked us together!

We spoke for as long as the crisp air would allow us. We corresponded via email and he let me read his senior thesis.  At the time, he was finishing his last year at the New School and I was more than happy to read a draft and give feedback and audience to his voice.  I learned so much about this brave soul.  His story is similar to mine in terms of growing up in a working class family in which you were raised on love, mother wit, and family, which are all on the shoulders of the black matrilineal line. As a result, it teaches us to dig deep in order to push against the adversity that lies in store for us.  In his senior thesis, he expressed that being a Black man that was queer was one closet but coming out as a cancer survivor with visible scars from treatment is another closet. He is a beautiful man both externally and internally but he felt that his scars would brand him un-attractive.  But so many of us have layers of invisible scar tissue.

In reading his thesis, I discovered myself. This man was a survivor of an illness that is often times considered terminal.  Yet, I too went undiagnosed with tumors.  I grew up with the multiple stigmas, that of being born to a teenage crack addicted high school drop-out mother, I grew up in a poor working class, and I identified as queer.  Not only was he a brilliant mind but he, like I, is a dancer, and of course his body from toe to finger-tip displayed it. His essay, like that of Audre Lorde, was a journey of the self.  It showed that diagnosis is real but it is what we do with it that kills us–or becomes our journey of healing.  He showed me what one can do.  He bought himself a passport and began to travel to parts of the world. Instead of sitting around allowing time, madness, and decay to take over, he collected passport stamps.

After graduation, he moved to Brazil.  I immediately wrote him and told him I wanted to do a face off and he’d be stuck in New York and I would live in Bahia.  Through his testimony, I realized what the definition of re-birth meant.  I also learned that too many of us live in fear.  What stopped me from traveling? Is it money? Is it fear of going alone? Is it the fear that the country I visit will experience a coup? Is it the fact that I will be robbed, beaten, kidnapped, and/or tortured? Have I like so many others developed xenophobia via the war on terror–as we terrorize others?

The Beatles said: “all we need is love.” How can we love when often times the enemy is us?

After contemplation and reflection, I made a promise to myself.  You have to give yourself and the people you love and respect roses.  Now the actual flower can be expensive. Giving a rose is telling those that you love and respect how much they inspire, motivate, and validate you and others.  We often give thorns or sit on them. In the wake of wars, terrorism, my own hometown filing for bankruptcy, senseless murders, genocide, and the constant deterioration of hope and love, we have to give roses to the living. We can’t wait until the funeral procession to give a beautiful floral arrangement.  We must do it now. 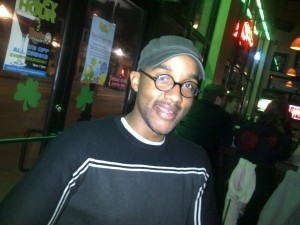 Anwar Uhuru is dancer, writer, a lover of ancestral wisdom, an advocate for peace, and a native Detroiter. He is currently a Doctoral student at St. John’s University and teaches part-time for CUNY and MCNY. His interests are ancestral memory, the power of empathy, industrialization, hegemony, womanist-queer voice, and Indigenous/Diasporic imagery. He also holds a BA in Dance from Marygrove College, Detroit, an MA in English Literature from Marygrove College, Detroit, and an EdM from Teachers College, Columbia University. He currently resides in the Bronx.

Related ItemsFearHealthLoveTravel
← Previous Story A Dialogue of Love: A Conversation on Freedom and Affect
Next Story → Love Notes in Four Parts