The Cape May Cross Culture Ferry – The Feminist Wire

The Cape May Cross Culture Ferry 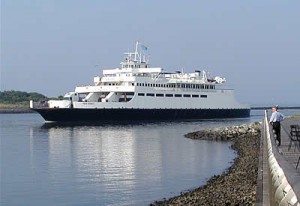 On July 6th, I traveled with my new wife, Kelly, from Washington D.C. to Cape May, N.J., for a short honeymoon. It was a long trip, not so much in miles as in traffic and time spent waiting to move. After the constipation of cars leading up to the Chesapeake Bay Bridge, traffic flow moved pretty quickly. By early evening, we had finally reached the Rehoboth/Cape May ferry. We paid our passage and waited about forty minutes to board.

Once on board, I exited the car and walked to the front of the ferry, unsure of my sea legs and the strength of my GI system, not being one accustomed to having my feet too far from solid ground. It turned out I had nothing to fear. That thing about keeping your eyes on the horizon really works. I stood in front of all the cars, and just behind the safety netting which didn’t really look strong enough to prevent a vehicle from rolling right off into the bay.

I had my camera with me and took a few pictures while enjoying the view and the feel of the cool breeze, and I squelched that inner nagging feeling to grab Kelly and have a sappy Titanic moment there at the bow of the ferry.

Kelly and I were bird watching there when two young women joined us at the front. They were dressed in a mixture of clothing, some seemingly “traditional” and some not. They wore long pants, and long sleeved tops, with scarves covering their hair and ears, and only their young faces and hands were visible. They chattered and laughed and talked as any high school or college-aged young women might have. One of them noticed my camera and asked if I was a photographer. I said it was a hobby, but not exactly a profession. They told us they were sisters, and Muslim. Not long after this exchange, the younger of the two decided to head up to the seating area while her sister remained behind, and Kelly decided to watch the birds from the back of the ferry.

So the older girl and I stood watching the waves for a bit. Then, she struck up a conversation with me.

“I’d like to climb over this netting and look off the edge of the boat, but I know somebody would come and stop me,” she said.

“That would probably be me, because it’s not very safe, and I couldn’t save you if you fell in,” I replied. I wasn’t sure if she was contemplating anything dire, or if she just wanted to be able to sit and dangle her legs unfettered in the breeze. She didn’t seem depressed, just restless and maybe a little rebellious.

“I can swim,” she countered.

“Maybe so,” I responded, “but you aren’t exactly dressed for it, and can you swim fast enough to get out of the way of the boat before you get sucked under?”

So we stood there and watched the waves some more. I asked her where she was from and how old she was. I found that she was to have her twenty-first birthday in a week, and that she lived with her family on the eastern shore of Maryland, and that she was double majoring in biology and chemistry.  She shared with me that she wants to live in New York City, because it is so large and so diverse. She said she felt very free when she visited there once.

She reflected on her birthday and said she didn’t feel like an adult.

“You know, there are all these rites of passage that are supposed to make you feel like a grown-up,” she pondered, “like when you graduate high school or get your driver’s license or go off to college. I didn’t feel any different when those things happened. Not grown up at all.”

“Well,” I said, “I’m 48 and I often don’t feel like a grown-up either. These thresholds we cross in age are not solid lines. I think that sense of feeling like an adult builds over time, as you begin to be responsible for yourself, as you make your own decisions and accept the consequences of them, whether good or bad. There’s no real timeline on that.”

She fondled the edges of her scarf, and cocked her head back toward where her family was sitting. “I don’t know when I’ll be able to do that.”

I didn’t have an answer for that one. I could relate, to a degree, and understood her restlessness and frustration. I had had those same feelings when I was younger, eager for the life I would make for myself.

She asked me questions about where I was from. I told her what Oklahoma is like, that I live in Harrisburg now, and that I’d just been married and was on my way to enjoy my honeymoon vacation.

Kelly had long since returned from the rear of the boat, looking a little anxious and queasy. I had not hidden our relationship, but acted naturally with her near me, asking, “Are you going to be okay, Honey?” and rubbing her back. When I felt she would be all right, I returned to the conversation with my new young friend.

She commented how the water looked dirty and it wasn’t clear. I agreed, lamenting that that seems to happen when people enter into pristine wilderness. We dirty it up.

She nodded. She asked me if I was Christian, but didn’t understand when I joked that I am a recovered Southern Baptist. (Perhaps as a non-Christian, the multiple sects of Christianity confused her.) I explained that there were just too many things about organized religions that made no sense to me, so I tend not to adhere to any of them. I told her that the closest thing to church and God, for me, is being in and at one with nature. I have no rituals to follow, and no need to join others in worship.

She told me there were many things about her own religion, its rituals and rules, that she still didn’t understand, that she’d only recently come to understand the reason for the scarf. As she fingered the tassels of it again, I wondered if maybe she understood, but maybe didn’t agree. She said that she was not looking forward to Ramadan, because it happens when daylight hours are the longest – as if it weren’t already hard enough to fast all day for thirty days – and doing it during the longest days of summer seems oppressive. I got the impression the fasting might have been one of those rituals she hasn’t yet come to understand.

I told her of my time in Muir woods last summer, when most of the people there didn’t give the magnitude and utter natural beauty of the place the reverence it deserves. Children were yelling and climbing over fences and running and tromping all over the undergrowth, and their parents were not stopping them. I had gone to see the trees for peace, and to feel the presence of the power of the universe (or God, but I use that word simply because I can’t think of any word better), and these people were desecrating what to me is a sacred place.

“I said to Kelly at the time,” I told my young friend, “I don’t behave like that in their churches. Why do they act that way in mine?”

A look of understanding crossed the young woman’s face.

I told her, “We all have our ways of trying to understand how the universe works and what our place in it is. I don’t begrudge anyone’s beliefs or how they practice them as long as they aren’t hurting anyone in the process. If God is out there, he knows who and what I am, and I’m prepared to deal with whatever eventuality awaits me at the end of this life.”

She seemed to ruminate on that a bit, and then said, “That makes some sense.”

After a moment of quiet thought, she said, ”If you have not noticed, I’m kind of a free spirit and I think for myself.”

“I have noticed, in fact,” I said. “I don’t think there are too many young Muslim women who would strike up a conversation with someone like me, a lesbian on my way to my honeymoon. “

Right about this time, Cape May harbor was coming into view and it was time to part ways. I asked her name. “Irim,” she said.

I leaned closer, “Could you say that again, please? I want to make sure I get the pronunciation right.”

A little louder and with more distinct pronunciation, she sounded out, “Ee Reem. Irim. It’s an unusual name, even in my culture.”

“Irim. I’ve got it now,” I said. “Thank you. My name is Angela. I’ve had a wonderful time chatting with you.”

Irim had no trouble hearing or saying my name. I didn’t ask her how many people throughout her life had instead called her Irene, though I couldn’t see her letting many get away with it. She had an aura of confidence and independence about her. She may have seemed  a bit unsteady on the boat, but with her focus on the horizon, I believe she will stand tall and move forward. 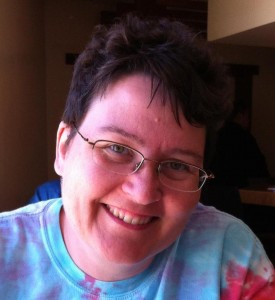 Angela Dicks previously served in the US Air Force and currently works as a data center analyst to pay the bills. Her true passion is her photography, and she recently set up shop at angeladicksphotography.zenfolio.com. She studied English Literature at Tulsa University a very, very long time ago but still likes the exercise of writing her experiences and memories through her own unique perspective, not unlike the way she captures the world through her photography.