Notes from the Red Corner: Making Room for Mixed Feelings about Media Culture – The Feminist Wire

Notes from the Red Corner: Making Room for Mixed Feelings about Media Culture

I fell in love with Maggie Nelson this summer. First I read Bluets, then Jane: A Murder, and finally The Red Parts: A Memoir. Searching for more of her voice, I found a podcast by a man who interviews her enthusiastically but also repeatedly interrupts her to ask off-base questions. He asks, for example, a sort of nonquestion about one of the more vulnerable moments in The Red Parts, a place where she takes the risk of revealing something about which she felt ambivalent. She had permitted her boyfriend to have sex with her while holding a stocking around her neck, the same way her aunt died, whose murder is the subject of the book. His nonquestion was basically, hey that was wild, inviting her to elaborate. I found her response instructive. She said it’s hard to talk in meaningful ways about certain details when they are taken out of context from the whole piece. I admired her even-keeled boundary maintenance, because I also write about experiences about which I am ambivalent, and I risk the personal, the intimate, the bare, and sometimes the blue moment in my writing in order to fully convey the rippled surface of my viewpoint. These are always the lines other people quote out of context. 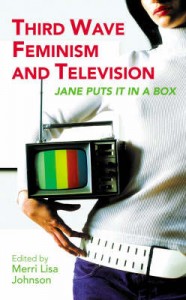 It’s clear from the title, “Feminist Cage Fight,” that the goal of Darlena Cunha’s article is not nuance, nor does the author aim for respectful exchange among feminists about the rich history of philosophical differences that structure this academic field. Given those failures of attention, I’d like to take this opportunity to clarify my position on media culture. In “Ladies Love Your Box: The Rhetoric of Pleasure and Danger in Feminist Television Studies,” I present an overview of critical trends in feminist responses to media culture. The article serves as the introductory chapter to my edited volume, Third Wave Feminism and Television, and although I set out to develop a theory of third wave feminist media criticism, my research showed that the wave model, and the paradigm of generational difference on which it is based, is flawed, so I ended up proposing instead that tensions can be more usefully mapped on to a broader divide among feminist cultural critics over whether to argue against the dangers of patriarchal cultures to women or to argue in favor of women’s efforts to pursue, demand, and produce our own pleasures despite the patriarchal constrains within which we live. It has been difficult for feminists to develop and sustain theoretical models that examine both the danger argument and the pleasure argument. This was markedly true in what has come to be known as the feminist sex wars (another inaccurate and unnecessarily violent rhetorical motif I have argued against elsewhere), and it is true, too, in the field of media studies. Because the focus in feminist media studies has been weighted toward the danger argument, I became curious about what it would look like to say more about the pleasure argument. However, and this is a big however, I expressed serious ambivalence about doing so throughout that introductory chapter. So, when I ask if watching television is like sucking the dick of patriarchy (a blue line that is quoted out of context and misrepresented, or perhaps simply misunderstood by Cunha), I am not being flippant or rhetorical. My answer is not no. In that moment, I am taking bell hooks’s concerns about the seductions and coercions of patriarchy 100% seriously.

Ambivalence is the central affect of positions presented under the rubric of third wave feminism, and it is the source of some of its most well known and frequently quoted critical lines. Like, everyone quotes Joan Morgan’s call for “a feminism brave enough to fuck with the greys.” I cut my feminist grad student teeth on this ambivalence, reading the introductory chapter of Third Wave Agenda, co-authored by Jennifer Drake and my dissertation director, Leslie Heywood, and committing their words about ambivalence to memory: “the lived messiness characteristic of the third wave is what defines it.” Building on the foundations of the third wave movement in Black feminism and U.S. third world feminism, Heywood and Drake point to contradiction as a fundamental critical strategy of this historical moment (approximately 1981-1997):

Because our lives have been shaped by struggles between various feminisms as well as by cultural backlash against feminism and activism, we argue that contradiction—or what looks like contradiction, if one doesn’t shift one’s point of view—marks the desires and strategies of third wave feminists.

In “Ladies Love Your Box” (a reference to Germaine Greer’s radical cultural feminist treatise of 1973, “Ladies, Love Your Cunts”), I quote a ton of other feminists who argue for a more complex model of feminist cultural criticism: Schweickart’s “dual hermeneutic” through which to apprehend the utopian or liberatory kernel inside “demonstrably sexist texts,” Modleski’s call for a more variegated typology of feminist spectatorship beyond female masochism or cross-gender identification, Dow’s description of television as a site of “primetime feminism” that offers strong female characters whose stories are sometimes warped by the pressures of patriarchal media logic. Based on these and many other citations, I state, “This balance between appreciation and skepticism, or pleasure and danger, shapes the third wave feminist media theory I am proposing.” My queer feminist insistence on the importance, validity, and complexity of women’s pleasure—and my Marxist feminist distrust of pleasure under patriarchy—have been misconstrued in Cunha’s ridiculous caricature of this article. Everyone knows there is no crying in baseball, and no ambivalence in cage fights, but I for one never walked into those sports arenas, and I refuse to be dragged there. 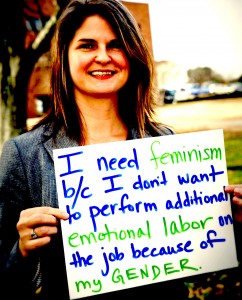 Positioning me in “the red corner” is an attempt to characterize my work as mainstream, conservative, Republican feminism. This could not be further from the truth. It wasn’t true when I published Third Wave Feminism and Television, and it isn’t true now. In fact, teaching Women’s and Gender Studies 101 since fall 2006—continuing to have experiences that reveal structural inequalities, constantly practicing the work of analyzing the world around me through a feminist lens, and, you know, just aging—has firmed up my radical side in the years since I wrote and published Third Wave Feminism and Television. (Although the author cites a reprint of my introduction to that volume that appears in a 2009 anthology edited by Rhonda Hammer and Douglas Kellner, the original piece appeared in 2007 and was written in 2005-2006, during the very first year of my professional reinvention as a Women’s Studies director.) It was particularly disconcerting to wake up on Friday morning to this representation of me in the red corner after going to bed early Thursday evening, as I often do after a day of teaching Women’s Studies to first-generation college students in the most conservative region of South Carolina. I am a blue dot in this red corner, and my work leaves me exhausted more days than not. I feel physically and psychologically battered by interactions in the classroom, where I am regularly called on to address the tangles of sexist ideology my students wear like sprays of fine flowers pinned to their chests. They don’t believe marital rape is real because why would you ever be sexually unavailable to your husband, especially since he will just get it from someone else if you don’t “give it up.” They can’t understand why a woman would not want to be addressed in terms of her marital status, since it is so obviously a badge of honor to be chosen as someone’s wife. They find it totally reasonable to exclude women who don’t speak English from shelters for victims of domestic abuse because, America! I laid awake at three in the morning thinking of new and better ways to explain privilege, to defuse white female defensiveness, and, always, to parse female desires for status, belonging, and meaningful intimacy, to point up the complex imbrications of wanting what we need, wanting what might be bad for us, wanting in ways that are damaging to people with less privilege. I woke up with a headache. It is two days later and I am still puzzling over how to teach this subject, how to reach these students without feeling sleepless and sick afterwards. Far from “carefree,” I’m out here doing the work, not taking cheap shots at other women.

Finally, in case anyone is wondering, I side completely with condemnations of Miley Cyrus’s performance as racist, and I always turn the channel when Robin Thicke’s rape anthem comes on the radio. I take zero pleasure in either one. For the record, my argument was never that we should take pleasure in everything patriarchy offers, or that all pleasure is good, but rather that when we feminists do feel pleasure, it is worth asking why, and considering the possibility that pleasure is multi-faceted, not simply an index of our social submission. 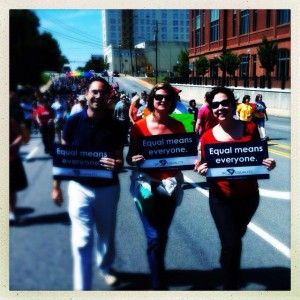 Merri Lisa Johnson is Associate Professor and Director of Women’s and Gender Studies at USC Upstate. She has edited four volumes of feminist cultural studies: Jane Sexes It Up, Flesh for Fantasy, Third Wave Feminism and Television, and On the Literary Nonfiction of Nancy Mairs. She is also the author of the critical feminist disability memoir, Girl in Need of a Tourniquet. Her forthcoming projects include two special journal issues: DSM-CRIP (co-edited with Anna Mollow) for Social Text Online, and Cripistemologies for the Journal of Literary and Cultural Disability Studies (co-edited with Robert McRuer).