“I Am Not a Slave”: Remembering to Sustain and Connect Our Black Radical Traditions – The Feminist Wire

Home / Black Women / “I Am Not a Slave”: Remembering to Sustain and Connect Our Black Radical Traditions

“I Am Not a Slave”: Remembering to Sustain and Connect Our Black Radical Traditions

I am not a slave. Say it again. I am not a slave. These are words that have been getting Afrikans into trouble for a long time, and our present and our imaginaries are often shaped by an acquaintance with the trouble that will follow any expressive recognition of our ownership of self.  Notwithstanding this, our people have been saying these words since even before Anastacia communicated them almost 300 years ago, with obvious consequences. For her, this action was punished by the muzzling of her mouth and the placing of a heavy iron collar around her neck, similar to what was done to many of our people in other sites of their forced enslavement on the continent and abroad. This penalty was employed so that her daring would not be heard by the other enslaved Afrikans on her plantation, who, provoked to righteous insolence by those words, turned newer faces of defiance to the plantation ‘owner’.  Anastacia died from disease brought about by the chafing and rusting from the iron muzzle and collar.

Over 30 years ago, this assertion of self and community self-determination also got Assata Shakur into comparable trouble. Being Afrikan in the world and in America has enough assaults awaiting — this we know. At the same time, her radical stance has provoked extreme illegitimate violence by a machinery that seeks to uphold white supremacist domination and that wants to keep us as slaves to the allegiances that are our genocide.  This apparatus would love to silence her, like they did Anastacia, to show Afrikans the fate that will befall them if they declare, assuredly, that they know what they are not.

I write here briefly to show the similarities between Anastacia and Assata, and to remember some other sisters/aunties/daughters who live(d) these five words that inhere freedom, in two places that I think about often. These are Kenya, the place of my birth, and Brazil, a site of other (re)births, both desired and unwanted (more on this another time). I recall both Mekatilili wa Menza and Lelia Gonzalez here while recognizing the many named and nameless sister freedom fighters who came with, before, and after them. These two are evoked here, perhaps to an audience who may not have heard of them before, to illustrate that past and present black radicalism is connected by, despite the dangers, those strong threads of remembering, even when it is hard to remember, that we are not slaves.

Can I tell you of the stirring these womyn have caused just from this knowledge of self? Nuff violences, lying history books and bounties have been enforced in their honour. Just ask Nanny, just ask the Mau Mau women, just ask Assata, just ask Mekatilili…

Mekatilili wa Menza, freedom fighter of Afrikan people, was one of the main catalysing forces behind a year-long rebellion by the Giriama people in Kenya in 1913. She, who had witnessed her brother being captured and enslaved before her eyes, relentlessly called for a rejection of white supremacist violence that was oppressing her people. The British imperialists who were tired of this “mad” woman decided to imprison Mekatilili who was over sixty years of age. As a result, she and another male leader of the Giriama called Wanje wa Mwadorikola were imprisoned, twice, thousands of miles from their homeland and many moons from their children. Despite taking these warriors to an outpost at the borders of what for these warriors was unknown territory, together with Wanje, Mekatilili escaped both imprisonments, on her own two feet, walking and unrepentant. “We are not to fear the Europeans,” she would assert often, and would walk and dance from village to village mobilizing others in these stirrings. Mekatilili knew, and lived with the knowing, that she was not a slave.

We also recall Lelia Gonzalez from Brazil, who assumed the identity of Negra long before it became fashionable to be black in a country that has long intended to either erase or control that Blackness. She was key in the creation of the Movimento Negro Unificado, the Unified Black Movement, which is an explicitly pan-Afrikan political organization formed in 1978, as well as in the articulations of an Afro- Brazilian and Afro- Latin American feminism. In her life as a womyn, teacher, comrade, lover, researcher, historian, and practitioner of Candomble, she recalled, and took responsibility from, the courage of those before her, and from within this strength, called out white supremacy and its virulent forms in Brazil. And in these ways, she provoked trouble(s) — this we know– but, above all, many of the rememberings required to contribute to the liberation(s), small and big, near and distant, that are so necessary for Afrikan people in Brazil, and worldwide.

The strength and the lives of womyn like Mekatilili and Lelia Gonzalez is what gives us the strength and possibility in our own lives to stand for each other and with Assata – and all of the Assatas. In remembering them, just like they remembered their pasts, we learn to work for the healing, dignity, and justice that channel the black radicalisms of our time(s). It is these channelings which connect past and present black liberation struggles that we see manifested in the actions of the womyn of Abahlali baseMjondolo, in the sisters on the frontlines of recent food price protests on the continent, in the rejection of colonial genders by Audrey Mbugua (viva Audrey!), and in the actions of our Afrikan sisters in Brazil who, right now, protest more than just the rise in bus prices and who, in body, mind and spirit, know more and more that they are not slaves.

I began here by evoking Anastacia, whose insistence that she was not a slave, despite the intense bids to enslave her and her people, energized many Afrikans in the same plantation to challenge the “authority” of the colonizer. And in her death centuries later, she is recalled and requested in a dedication to:

“give us the strength to struggle each day so we can never be slaves,

May we heed this dedication, for it is in this knowledge that comes with these recollections that we can strengthen the threads of defiance that connect past and present black radicalisms.  For your mother and for your sisters, for your daughters, sons, fathers, children, lovers, for your brothers and people, for Assata, for yourself say it: I am not a slave. Again. And in these rememberings, you can await the troubles that follow (this you know), but, most of all, be prepared for the energy and strength that comes with knowledge of self and/in community, and for the hard work, amidst the dangers, to sustain this knowledge for self and community so that no one again will ever imagine that we are or were ever slaves. 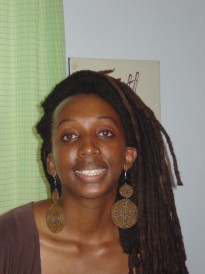 Wangui Kimari is an organizer with Bunge la Mwananchi/ the People’s Parliament in Kenya, and with the Network for Pan-Afrikan Solidarity (NPAS) in Toronto, Canada. She is also a big Nanny of the Maroons and Cabral admirer, (reluctant) grad student, researcher, and (hopeful) writer. And without a doubt, she knows that one of these days, soon, Afrikans will be free and unified. She bigs up Kalunga wherever she goes, and can be reached at wanguiwathuo@yahoo.com.