Gender, Race, And Going To Class: A Call For A Feminist Reading of For-Profit Colleges? – The Feminist Wire

Home / Economy / Gender, Race, And Going To Class: A Call For A Feminist Reading of For-Profit Colleges?

Gender, Race, And Going To Class: A Call For A Feminist Reading of For-Profit Colleges?

Most of us have seen the ads exhorting us to “call today!” to start on a new future with a college degree. How many of us have noticed the faces in those ads? 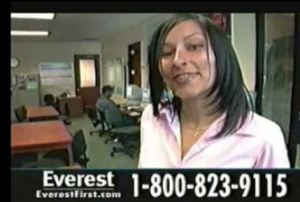 The gender, race, and affect of the faces and voices in for-profit college marketing are the kinds of things I  notice in the course of my research about schools like Strayer, Everest, the University of Phoenix and any number of name brands that seem to pop up every month. We know a lot about how much for-profit colleges cost (as much as the most elite college degrees) and we know a little about whom they serve but we do not ask a lot about why they serve whom they serve.

It is difficult for me to not ask that question. I interview for-profit students to ask of them what many of us have asked ourselves when one of those ads pops up at the train station or on late-night TV: why would someone enroll in a for-profit school?

It is not lost on me that so many of the students I interview look like me. They are often black. They are poor and working class. Some are solidly working class.  Yet, with notable frequency, they are almost always women. That is due, in part, to the nature of qualitative research and respondent-driven sampling on which I rely: women are more likely to agree to be interviewed and their peer groups are more likely to be other women. Yet, that is also indicative of the quantitative data about the students for-profits overwhelmingly serve. Sixty-nine percent of for-profit students are women. The lower the degree, the more women you find: 75 percent of the students enrolled in for-profit two-year degrees are women. And they are working towards degrees in gendered roles like administrative assistants and nursing aides in gendered fields like healthcare and education.

They are also twice is likely to be poor than women in traditional colleges. And not just poor but quite poor: 16 percent of for-profit students came from families receiving support from the welfare system. For comparison, just 2.6 percent of public and 1.6 percent of private not-for-profit students were engaged with the welfare system.  Low-income female students from every racial/ethnic group are nearly three times as likely to attend for-profits as their higher-income female counterparts.

There is certainly variation between for-profit colleges. Higher profile technology schools like DeVry have fewer poor women than do Everest College, which mostly trains people for entry-level jobs in healthcare and office work. To be sure, women make up the majority of all students in traditional higher education, too. Yet, the feeling lingers that there is something about the faces that market for-profit colleges and the faces I encounter as I interview for-profit students that is unsettling. What if, in all our proselytizing ever more education, we are failing to interrogate if all college degrees are created equal and worth any price? The answer would matter for women like Maxine.

I interviewed Maxine at a coffee shop near her work. She is a 43-year-old grandmother of five, mother of three. She graduated from high school with her first-born a few weeks old in a stroller. She has put her children through school by working at a range of manual labor jobs. The companies change, the job title changes, but her position in the social structure has been relatively stable. She packs, sorts, orders, ships, and occasionally cleans in warehouses and back-office rooms for companies like Solectron and TJ Maxx. When one job became unbearable because of a bad boss, inflexible work hours or when the job would just end, Maxine would find the same work at another local employer. That’s how millions of people have historically worked in what sociologists call the secondary labor market. About seven years ago the time between those jobs got longer, the next job harder to find. Increasingly, Maxine works through temp agencies that treat her like cattle. If she misses the phone call for the next job assignment, she misses out on a day’s work. And the work has become harder. There is less order entry and more lifting and hauling. And Maxine is “getting too old for that shit”.

By the time Maxine saw the television commercial for her for-profit college she had been primed by the reality of being a poor single mother to hear its message. She had not been a good student in high school and she had tried enrolling in at least five other job-training programs through the years. She had not completed a single one. But the choices are different for her now. Maxine cannot rely upon food stamps to help feed the grandchildren she often keeps so her children can chase work. The program that provides food subsidies has work requirements and, again, work being hard to come by is why Maxine is where she is. Maxine does not qualify for unemployment insurance because temporary workers rarely meet the requirements. If she chooses to engage the one social safety net left available to millions of Americans, she is choosing to exit the workforce permanently. 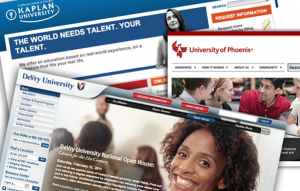 Maxine’s economic and social position is urgent, just like the television ads for the for-profit colleges that market to people like Maxine: “call now!” “start today!” “WHAT ARE YOU WAITING FOR?!” For their part, for-profit colleges recognize this urgency and maximizing it is part of their business plan. It is easy to take for-profit colleges to task for turning social need into an unmet market. It is far harder, yet ultimately more important, that we ask why so many poor women, so many single mothers, and so many black and brown women are turning to for-profit colleges to change their lives today.

We have a few ideas. We know that women in the U.S. do not enjoy paid maternity leave. We know that we do not provide subsided, affordable child care. We know that changes in low wage work disproportionately impacts Black and Hispanic women. We know that the transformation of welfare to a jobs first program amid The Great Recession has made women more vulnerable to changes in the labor market. We know that if your business plan is to maximize social pain for profit, single mothers and poor women have been constructed through social policy as a pretty lucrative target.

So, yes, women are the majority of all college degree seekers. There is nothing particularly shocking about that also being true of for-profit colleges. But it is also true that there is something salient about all the women I interview who are attending for-profit colleges. All of them are mothers. Three-fourths of them are black or Hispanic. The kinds of economic and social policy changes that affect people like Maxine disproportionately affect mothers, particularly black and Hispanic mothers. Their urgency is not like the urgency that motivates the majority of women at traditional colleges. They are dual heads of the same beast, perhaps, but they are qualitatively different. Young women in traditional colleges are responding to the need to be better educated than their male counterparts, even if that means working for less money. The women I interview are earning the most expensive, most contested of all college credentials not to be competitive but to survive.

That their survival also means surviving for their children and their extended families is absolutely gendered. The greatest risk factor for enrolling in a for-profit college isn’t just gender but gender and parenthood. It is being a single mother. The practical college options for mothers is a direct consequence of our nation’s refusal to provide paid maternity leave or subsidized childcare. It could explain why poor men, facing similar economic conditions, are not running to for-profit colleges at the same rate as women.

These are the kinds of realities that are obscured in much of the analysis around for-profit colleges, which focuses largely on their high cost and high student loan debt. These economic orientations are themselves a way of ignoring, if not outright obscuring, the social lives of economic realities. We research and legislate and debate the high cost and high student loan default rates among for-profit students without the proper context.  Not all student debt is the same kind of debt because not all students are facing the same set of social conditions. Poor women, especially black and brown women, are living amidst hostile social conditions. Social policy demonizes them as welfare queens and reckless reproducers. The workforce pays them less because they can pay them less. Traditional colleges do not organize to serve them because no one moves up the college rankings by serving poor women who need more resources to serve. And so we end up where I often end up: across the table from women like Maxine trying to make a story most of us would rather not hear from a number most of us would rather ignore. That is always a set of conditions amenable to an intersectional feminist reading.

Related Items
← Previous Story Indigenous Women: Never Idle
Next Story → Dispatch from the 'Very House of Difference': Anti-Black Racism and the Expansion of Sexual Citizenship – OR – We Need to Do So Much Better at Loving Each Other