"20 Feet From Stardom" & the Black Female Gaze – The Feminist Wire 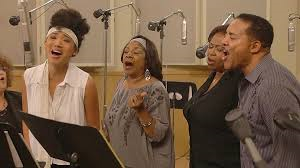 In the 1972 song “Take a Walk on the Wild Side” Lou Reed evokes the paternalistic image of “colored girls” cooing in the background to a hipster tale of New York debauchery.  Using Reed’s homage as its introduction, white director Morgan Neville’s bittersweet documentary “20 Feet from Stardom” attempts to bring black female back-up singers into the foreground with both moving and problematic effect.

From the 1950’s to the present, white America “walked on the wild side” via the dulcet tones and searing power of black women’s voices.  Then as now, black R& B music was often the “colorful” backdrop to lily white pop culture scenes of “all-American” revelry, romance, and heroism. For the white consumer of the postwar Jim Crow era, the commercial rise of rock and R&B transformed racial otherness into a more mainstream adventure; a resort vacation to unexplored vistas of self-discovery that anyone with a radio or a few cents for a 45 record could take. As the world’s most rabid consumers of black culture, white folks’ imperialist yearnings to be “black” (from Jack Kerouac to Norman Mailer to Sandra Bernhard) emerge from this grand obsession with the supposed wild, raw, unfettered, close-to-the-bone emotion and physicality of the Black woman belting out soulful paeans to life and love.  Minus the racial terrorism, segregation and ghettoization, blackness has always been a sexy place for whites “eating the other”.

Black women’s back-up singing was crucial to the evolution of modern rock and R&B, buttressing songs as disparate as the Crystal’s “He’s a Rebel” and the Stones’ “Gimme Shelter” by turning them into richly textured classics.  “20 Feet” captures the deep travesty of obscurity, marginalization and, often, poverty, that these pioneering artists faced.  Spotlighting multi-generational artists such as Merry Clayton (who did the powerhouse vocal on Gimme Shelter), Darlene Love, the Waters family, Tata Vega, Lisa Fischer and Judith Hill, the film’s broad historical sweep shows both how much and how little has changed.  Women of color back-up singers are still treated like expendable objects, eye candy and soulful exotics while fighting tooth and nail for recognition and a shot at center stage.

The trajectory of the fiercely talented Darlene Love is the movie’s template and touchstone.  Royally swindled by famed producer and (now) incarcerated killer Phil Spector, Love was the voice of many of the sixties most hummable R&B classics.  While her vocals on the smash hit “He’s a Rebel” made her a sought after studio singer, she was cheated out of the opportunity to appear in public singing her own work.  Love describes the indignity of seeing the Crystals become the public face of her song; lip synching to a number one record while she battled Spector for her just due.  As has been well-documented, exploitation of black artists was institutionalized in the music industry.  Elvis Presley and scores of “trailblazing” white artists and producers built their careers, empires and international stardom on the backs of uncompensated and un-credited black artists.  Nonetheless, the film is largely silent about the mammoth battles black artists waged for recognition and royalties.  Love’s decades-long fight with Spector is its only nod to the insidious racial and gender politics that drove capitalist exploitation in the industry.

Similarly, there is only fleeting critical commentary on the sexist objectification of black women vocalists and the way in which this ultimately stunted their careers.  Footage of the Ike and Tina Turner revue is used to highlight stereotypes of feral black female hypersexuality, underscoring the bind that women who wanted to be successful in the industry faced.  Singer Claudia Lennear, a former “Ikette” and Rolling Stones back-up, comments on the requirement that the Turners’ back-up vocalists be scantily clad.  She then limply deflects questions about her own decision to pose for Playboy.  Unfortunately, the film never deepens its appraisal of sexism (especially its implications for the modern day “video ho” phenomenon, an image of black women that is one of rap and hip hop’s most enduring and degrading global exports).  Reflecting on Turner and her rise to fame in her piece “Selling Hot Pussy,” bell hooks wrote “The black female body gains attention only when it is synonymous with accessibility, availability; when it is sexually deviant…Turner’s singing career has been based on the construction of the image of black female sexuality that is made synonymous with wild animalistic lust…Ike’s decision to create the wild black woman was perfectly compatible with prevailing representations of black female sexuality in a white supremacist society .”  Hooks’ perspective would have been a welcome antidote to the ribald ignorance of USC professor Todd Boyd who comments that Ike played the role of the “pimp” to his stable of “hos” (i.e., Tina and the Ikettes).  As if to confirm this, the camera cuts to a shot of Turner, Lennear and  the Ikettes gyrating and bending over suggestively in micro minis and high heels at a raucous outdoor concert.

Hooks notes that Tina Turner’s image was shaped by Ike’s “pornographic misogynist imagination” and his obsession with jungle films. The subtext of the film is black women’s resistance to this brand of sexualization and the regime of the male gaze (corporate, white, ageist, mainstream).  It is a narrative that develops despite the political limitations of the white director who is clearly enthralled with the “mystique” of black soul.  This tension is reflected early on in the dichotomy the film constructs between mainstream cultural norms of white feminine respectability and “authentic” black femininity.  Commenting on the origins of the back-up singer tradition, the narrator contrasts the restrained primness of white female vocalists with the “raw” abandon of the mostly gospel trained black female vocalists.  “We called them ‘readers,’’ Darlene Love says, referencing the white mainstream method of simply singing the notes on the page without injecting passion and spontaneity into the delivery.  Reinforcing the stereotype of “natural” “God-given” black soul singing talent, the film does not explore the musical training and vocal instruction some of these black women artists undoubtedly received.  Nonetheless, the sheer discipline and tenacity of the back-up singers is conveyed by their testimony about marathon all-night recording sessions, demanding concert tours and exploitative conditions.

While the commentary each singer provides is illuminating, it would be inconceivable for a retrospective on white male singers to feature virtually all black women musicians, historians, technicians and producers as subject experts on their careers. However, this is the “benign” structure that “20 Feet” sets up.  For nearly two hours the women appear through the eyes of their mostly white male employers— rock and pop superstars like Mick Jagger, Bruce Springsteen, Sting and Chris Botti—and assorted white male subject experts.   Presumably hooks, Angela Davis, Patricia Hill Collins, Michele Wallace, Joan Morgan, Tricia Rose and scores of other black feminist scholars and music historians were unavailable to critically contextualize these women’s experiences.  This gross deficit makes “20 Feet From Stardom” a meta-reflection of the constant struggle women of color must wage for political visibility, historical validation and culturally responsive scholarship.  Attempting to evoke the social upheaval of the sixties, the film trots out stock images of the Black Panthers as well as Tommy Smith and John Carlos’ iconic black power salute at the 1968 Olympics to evoke black consciousness.  We catch a fleeting glimpse of Kathleen Cleaver but no other black women figures or activists are evoked.  It would have been powerful to hear what Cleaver, an esteemed legal scholar and feminist critic, would have had to say about Merry Clayton’s decision to sing back-up on Lynyrd Skynrd’s 1974 song “Sweet Home Alabama,” a racist homage to Dixie. Clayton ruefully critiques “Alabama” and describes the force she put into her vocals as an act of resistance, reflecting the contradictions of an era in which black women artists felt they had to conform to visions of white supremacy in order to survive.  But apparently giving this narrative a critical, scholarly black feminist voice would have been too much of a walk on the “wild side”.

Sikivu Hutchinson is the author of Moral Combat: Black Atheists, Gender Politics, and the Values Wars and the newly released Godless Americana: Race and Religious Rebels.

Related Items
← Previous Story Is a picture worth a 1000 words? Race and the politics of mourning
Next Story → Thoughts of My Father: Though They Had Been Drivers They Had To Be Forgiven