Hands Off Assata! – The Feminist Wire

I was one of those seasoned activists who were utterly taken by surprise when Assata Shakur was recently placed on the FBI’s Ten Most Wanted Terrorists List.  Having known Assata for several decades and having been involved in many aspects of her defense over the years, my first thoughts were for her safety.  But then I also realized that while she was the specific target, the scope of  this unexpected drama of repression was much vaster. Indirectly, it targets activists, young and old, working for radical change in many arenas.  Since Assata has been living in Cuba since the 1980s, this act also seems designed to misrepresent the country that granted her political asylum as a haven for terrorists and thus to prevent the normalization of relations with Cuba

Many years ago, I was similarly shocked to learn that I myself had been placed on an FBI list – of the Ten Most Wanted Criminals. This only began to make sense to me when I realized that I was not the exclusive target: through me, the FBI was transmitting a message to all revolutionary activists that they would be marked as criminals and that, in fact, our movements against imperialism and for racial and gender justice would be generally criminalized.

Today, forty years after Assata was arrested (and later convicted) for a crime she could not have committed, she has emerged as a symbol of continuing resistance  to racism,  gender repression, and contemporary challenges to U.S. empire.  I personally feel compelled to defend and protect Assata because I love and respect her as an individual and know her commitment and compassion to be exemplary.  At the same time, I know that if we expect to move forward in our many collective efforts to achieve social justice, we will have to compel President Obama to hear our message.  We urge him to reverse the FBI’s decision to make Assata Shakur the face of terrorism in this country.  And we say to anyone who might be thinking of collecting the $2 million bounty:  Hands Off Assata! 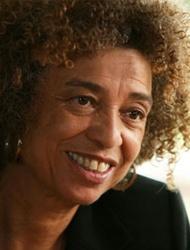 Angela Y. Davis is Distinguished Professor Emerita of the History of Consciousness and Feminist Studies at the University of California, Santa Cruz. She is known internationally for her ongoing work to combat all forms of oppression in the U.S. and abroad. Over the years she has been active as a student, teacher, writer, scholar, and activist/organizer. Her long-standing commitment to prisoners’ rights dates back to her involvement in the campaign to free the Soledad Brothers, which led to her own arrest and imprisonment. Today she remains an advocate of prison abolition and has developed a powerful critique of racism in the criminal justice system. She is a founding member of Critical Resistance, a national organization dedicated to the dismantling of the prison industrial complex.