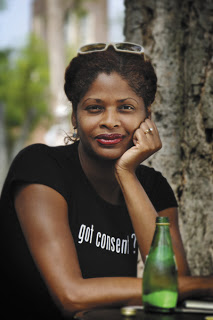 She is the author/editor or co-editor of eleven books. Her latest, Pimps Up, Ho’s Down: Hip Hop’s Hold on Young Black Women, received the 2007 Emily Toth Award from the American Culture Association/Popular Culture Association for the Best Single Work by One or More Authors in Women’s Issues. The book was also recognized by Ebony as an April 2007 top non-fiction work. It has been praised in such venues as Ms. Magazine, the Source, the Philadelphia Inquirer, and the Washington Post.  Sharpley-Whiting testified before the 110th Congress in 2007 on “Degrading Images of Women” in the Media and Popular Culture in the wake of the Don Imus controversy.

She lectures widely in the United States and abroad, has offered commentary on a range of issues for Fox, MSNBC, NPR, C-SPAN2, and CBS News. She was the 2006 winner of the Horace Mann Medal for Distinguished Graduate School Alumni from Brown University.  She has recently edited and translated, Beyond Negritude: Essays from Woman in the City (SUNY Press, forthcoming 2009), a book on Paulette Nardal and the Martinican journal La Femme dans la Cité as well as a collection on Barack Obama’s “A More Perfect Union” address entitled, THE SPEECH: Race and Barack Obama’s “A More Perfect Union” for Bloomsbury USA (2009). She is co-editor of the Norton Anthology of Theory and Criticism (2nd Edition) and series editor of “Blacks in the Diaspora” (Indiana University Press) and co-editor with Robert Bernasconi of “Philosophy and Race” (SUNY Press). She currently directs the Research Center arm of AADS.  She is author of the forthcoming Bricktop’s Paris and The Autobiography of Ada “Bricktop” Smith.

Tracy D. Sharpley-Whiting is beautiful, brilliant, and extremely generous. She’s a feminist that I love because her feminism is complex, inviting, and most importantly lived.  She. Is. Fierce.  What’s more, she’s a role model for those of us balancing academia, scholarship, motherhood, and marriage.  I have many names for her: Tracy, Dr. Sharpley-Whiting, and “T.”  But most importantly she is mentor, colleague and friend. Enjoy!!