The Star Barbershop – The Feminist Wire

Outside the Star Barbershop
its red, white, and blue twisting barber pole
announced a fraternity inside.

Holding my father’s proud hand
I was led here monthly,
for haircuts and initiation
into this world, an army
of smells and sensations.

I waited on a smooth brown couch
in a world of mirrors, until I was called
to climb up into the red leather chair,
a giant lap with a boxy booster seat.

On my early visits,
I was frightened by the dispensers
of hot shaving cream,
anchored on the shelf behind each chair,
chrome snakes hissing out a fluid
for which boys had no need.

The tanks of crystal blue water
worried me too, the submerged
combs and scissors, like corpses,
suspended, awaiting a savior.

I gazed at the poster on the wall
advertising my haircut choices.
I always wanted an Ivy League
or a Varsity, but the curly salad
that sprang from my head
would give in to none of these.
My tangled twisting hair
knew no right angles,
all circles and coils ready to spring.

Cy the barber was a big man,
hands like pizzas,
a cologne that smelled like Coca-Cola.
His big shoulders hunched behind you.

The men looked at magazines
and laughed at jokes I did not get.
They complained about the Dodgers
and Nixon and yard work.

Though I was an invited guest,
I knew that for me
this was a foreign country.
I would never belong here.
For this place, I would never be
man enough. 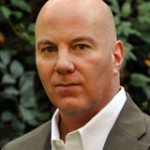 Joseph Ross is the author of two collections of poetry: Meeting Bone Man (2012 Main Street Rag) and the forthcoming collection, Gospel of Dust (2013 Main Street Rag). A three-time Pushcart Prize nominee and the winner of the 2012 Pratt Library/Little Patuxent Review Poetry Prize, his poems appear in a variety of anthologies including Collective Brightness: LGBTIQ Poets on Faith, Religion and Spirituality. His poems can be found in many journals including Poet Lore, Tidal Basin Review, Beltway Poetry Quarterly and Words. Beats. Life: The Global Journal of Hip-Hop Culture. He teaches in the English Department at Gonzaga College High School in Washington, D.C. and writes regularly at www.JosephRoss.net.

Related ItemsJoseph Ross
← Previous Story “Touch: A Letter to the Mother”
Next Story → If coherent light