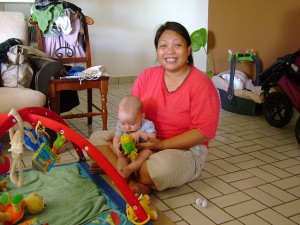 A recent Time magazine article on the “Invisible World of Nannies, Housekeepers, and Caregivers” by Ai-jen Poo, Director of the National Domestic Workers Alliance, prompted me to post this piece. I have to send this one out to all my Filipinas. And for those who don’t know, consider this an educational moment.

Several years ago I met an older white woman from upstate New York who genuinely wanted to engage me in a conversation.  However, I could tell by the somewhat apprehensive look on her face that she wasn’t quite sure how to address me or what to say.

“Yes, my mother is from the Philippines.”

“(face lights up) Oh, well then, you would have liked to meet my son’s Nanny, Bebe!”

This type of exchange is not uncommon in the lives of young Filipinas.  After all, there are many Filipina nannies in North America.  Most of us have relatives who took this route to Canadian or American citizenship.

That said, this type of comment, while often a well-meaning attempt to engage the Filipina in question in a friendly conversation can really grate on her nerves.  Why?  Are we just being sensitive?  Perhaps, but one has to understand the deeper set of racial, gender, and class stereotypes embedded in this type of encounter.

First of all, if your only point of connection with Filipino people is through your son’s nanny, then you have just automatically exposed your lack of contact with the community.  We are not all nannies; nor are all our parents are nannies.  Indeed, the immigration laws were such that most Filipinos who came to North America during my mother’s generation (late sixties-early seventies) had college degrees and/or professional training.

I have a Filipina friend who is a successful real estate broker, and she has had many of these awkward exchanges with her white, upwardly-mobile clients.  However, she has developed a fail-safe way of stopping the conversation before her clients embarrass themselves any further.

“What is your background?  Are you Spanish?”

“Really, so do I.  (actually, she has no children) Aren’t they the best?  (fake snooty tone) I say to all my friends, ‘You simply have to try a Filipino nanny.’”

Saying, “I have a Filipino nanny,” is kind of like saying, “All my best friends are black.”  It doesn’t do anything to legitimize your love of Filipino people.  In fact, it once again exposes that your only template for thinking about Filipino people is through the trope of a servile woman.

Don’t get me wrong, I’m not hating on Filipina nannies.  Nor do I have a problem being associated with nannies.  The reality is that most Filipina nannies have to leave their own families behind to go overseas to care for other people’s children simply to put food on the table.  The Philippines has the highest per capita rate of international migrant workers, with nurses, nannies, construction workers, sex workers, and seamen having to leave the country in order to hold things together back home.  However, the irksome part is that underlying such comments is the assumption that we are only equipped to be the happy, friendly, submissive people that we supposedly are.  We know the truth about nannies because they are our family members and friends (their intelligence, quick-wit, practicality – their fearlessness, strength, and grit), but this is generally not how society perceives them.  Case in point, the same older woman went on to talk about her son’s nanny.

“She was probably the best-paid nanny around.  They treated her like family.”

“You know, she had a child and a husband back in the Philippines.”

“Yeah.  What kind of a mother leaves her own child behind like that?”

“Actually, the United States has played a big role in keeping the Philippines as an underdeveloped, client state with few prospects for employment.  And the immigration laws here are tough.  My aunt had to leave her son and husband behind for several years to go make money as a nurse, first in the United Arab Emirates.  Next, she found a job in Canada and then reunited with them. Now she lives in New Jersey.”

“(sheepish) Oh, well I’m just saying, it would be hard to leave your child behind.”

So, to make a long story short, don’t bother telling me about your Filipina nanny, especially if it is the first thing you’re dying to blurt out upon meeting me.  Why not converse with me for at least few minutes about my experiences as a PhD student or a young professor before launching into the details of your son’s childcare situation? Or better yet, instead of getting all “benevolent” and paternalistic on me, why not offer some tangible support for Filipina nannies, caregivers, and domestic workers in their quest for better wages, working conditions, and respect.