A professor-friend of mine once said, “You can’t shine dirt.”

Her words replay nonstop as I consider several convergences: two days after Barack Obama’s reelection, a billionaire’s kid is tweeting about assassinating the President and trying to write it off as a joke, the Tea Party’s intensification of its racist tone throughout this election cycle, and remarks by newly defeated Arkansas House candidate Jon Hubbard, whose epic temerity in saying Black people must view slavery as “a blessing in disguise” exemplifies racism dressed up as patriotic Christian devotion.  Apparently, his brand of Tea Party cynicism continues to incite malice despite, or perhaps because of, the recent thrashing of their platform at the voting booth.

I find it instructive to revisit Hubbard’s remarks for what they reveal about our current post-election (some would call it post-racial) political moment, even as his career as a State Representative fades away.  Justifying slavery as moral benefit denies the war on Black humanity that was the TransAtlantic Slave Trade.  It’s like The Inquisition claiming torture saved souls, Salem deciding a “witch” who drowned was Christian, or Sheridan declaring the only “good Indian” he ever saw “was dead.”  You don’t know American history until you grasp terms like “Black Codes” and “Middle Passage,” the latter denoting four hundred years of Atlantic crossings and global enslavement in which, as historian Clayton Lusk notes in “An Open Letter to Jon Hubbard,” an estimated 60-70  million Africans were kidnapped, a conservative estimate of 10 million dying en route to the Americas. The sugarcoating of this wretchedness is a deliberate glossing by those too arrogant to ask themselves if they grew up absorbing the bigoted racist/sexist/class assumptions that continue to fester beneath ignorance and the fantasy of colorblindness. Using religion as feel-good ahistorical substitute for facts is not the fix. If you want to say anything meaningful about slavery, you need to know two words in addition to everything else you think you know: genocide, holocaust.

Hubbard’s 2009 book, Letters to the Editor: Confessions of a Frustrated Conservative, took aim at Black “entitlement,” typifying neo-conservative use of the “e” word as contemptuous substitute for the “N” word, code for hatred of affirmative action, and denial of any concept of injustice.  The Arkansas GOP “denounced” Hubbard’s comments, hoping to spin them as the remarks of “a single misguided party official.”  News outlets including MSNBC and Salon.com flagged Hubbard’s racism, and TalkBusiness.net’s Michael Cook  called on conservatives to “condemn” the bigotry.  Even so, not all Republicans  retreated, and “Americans for Prosperity” continued to support Hubbard and other pro-slavery legislators.

News stories haven’t looked beyond the shock of the racism to link Hubbard’s slavery comments to his views on crime, but his remarks on Black criminality are telling and have sinister implications for prison policy.  Arguing that, “Especially for those in the younger generations, a life of crime is seen as having a more acceptable future than the  completion of a good education, followed by the accomplishments gained only from a productive occupation,” he blames integration for failing schools, joblessness, and “a dramatic rise in crime…” Echoing the argument that Black crime stems from character deficits rather than structural inequality, Republican Vice Presidential candidate Paul Ryan promised “to teach people good discipline, good character,” as a solution to “inner city” crime. Each panders to white fears of being dominated by an uncivilized Black and Brown majority.  Hubbard and his ilk are not only throwbacks to slaveocracy, the really insidious feature of the argument is that ‘Slavery-as-blessing’ gives traction to myths of Black entitlement and inherent criminality, and telegraphs Tea Party beliefs that promote Black imprisonment.

Slavery, by the way, is legal in prisons because the Thirteenth Amendment permits it:  “Neither slavery nor involuntary servitude, except as a punishment for crime…”

Obama’s reelection, while a beacon of hope, is not the end of struggle against racism and the residue of slavery.  We need to strike that clause from the Constitution. Why? Because slavery WAS and IS an abomination. “The land of the free” has the largest prison system in the world, and it is full of Black people.  The prison-industrial complex is a growth industry; occupied cells produce money, and prison work pays well below minimum wage if it pays at all.  According to The Sentencing Project, a third of Black men ages twenty to twenty-nine are under criminal  justice supervision.  One in four will be incarcerated in their lifetime, most often for non-violent and victimless crimes.  Thirteen year olds are getting life sentences.  Two-million human beings are doing time in the U.S., and five-million more are newly released, on probation, awaiting trial, or awaiting sentencing.  These numbers don’t account for the millions of families affected, or the four-hundred thousand people in immigration prison.  They certainly don’t account for those afflicted by mental and physical illness and the reduced life expectancy associated with cycling in and out of the prison system. Striking Article One of the Thirteenth Amendment might aid in ending America’s addiction to criminalizing Black people (maybe we need a Twelve Step program on racism while we’re at it).

There are, to be sure, Black success stories, people who overcome incredible adversity to beat the odds. But millions of Black children are expected to manage without resources in criminalized, impoverished communities; many of their parents are entangled in a prison system that profits from keeping Black men and women in lockdown.  In a recent New York Times article by Sam Roberts titled “How Prisoners Make Us Look Good,” Dr. Becky Pettit points out that public perceptions of overall Black progress in the U.S. are shaped by reports that exclude inmates and ex-inmates.  Pettit finds that “By the time they turn 18, one in four black children will have experienced the imprisonment of a parent,” while overall, “Blacks account for nearly half of the more than 2.3 million Americans in prison or jail.”

In effect, the prison-industrial complex is not only “The New Jim Crow,” as Prof. Michelle Alexander points out in her critically acclaimed study. Prison is the new Middle Passage. The final outrageous consequence of framing any slavery as moral benefit is that it dulls us to the crisis of what is happening today: the abuses of the prison-industrial complex and prison privatization, the modern savagery of adult and child trafficking and sex slavery, and the global exploitation of workers.  The UN currently reports that approximately 2.5 million people are enslaved to traffickers, who collect more than $31 billion annually.  This is a growing, interconnected economy of rape and abuse. This is not a mercy.  It is another holocaust.

Slavery is depraved. It isn’t a pretty history. But it matters that we brace ourselves to face it without prettification or voluntary amnesia. Voters rejected Hubbard, but the lingering effects of the ‘blessing in disguise’ fantasy call for continuous debunking.

The notion that slavery blesses the enslaved is but one exceptionally dirty face of it. 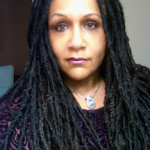 Valorie D. Thomas is an Associate Professor of English and Africana Studies at Pomona College, in Claremont, CA, where she is also current Coordinator of Gender & Women’s Studies.  Her work has appeared in African American Review, Huffington Post, Frontiers: A Journal of Women Studies, Biography (forthcoming), and most recently in Black Cool: One Thousand Streams of Blackness edited by Rebecca Walker. She is completing a book manuscript on interstitial space and agency in the African Diaspora, and is an alum of the OpEd Project. Twitter @valoriedthomas.