Black, Female and Buddhist in Academia: Threats to Wellness and Opportunities for Healing – The Feminist Wire

Home / Academia / Black, Female and Buddhist in Academia: Threats to Wellness and Opportunities for Healing

Black, Female and Buddhist in Academia: Threats to Wellness and Opportunities for Healing

By Guest Contributor on November 1, 2012

Renown educator and Buddhist leader, Dr. Daisaku Ikeda offers a vision for academia when he states,

Education makes us free. It is through education that we are liberated from powerlessness, from the burden of mistrust directed against ourselves. The individual who has been liberated from self-doubt, who has learned to trust in him- or herself, is naturally able to believe in the latent capacities of others. One becomes able to look beyond the present appearance of another to perceive and believe in the wondrous treasures hidden within.

As a Black female Buddhist in the academy, these words resonate with me as I strive for absolute freedom for myself and all others.  In this article I alternately use the first, second and third person singular because although I know this to be some of my story, I also believe there to be many others who share parts of the experience. Every one of our stories is uniquely exquisite in all its agonies and triumphs and every conte deserves its own utterance.

In the thick of it, anticipating this weeks’ nine-hour day of teaching and impending politically charged exchanges in various academic contexts, despair can make a reflective narrative such as this one hard to write.  Ralph Ellison, noted for his brilliance and his misogyny, nonetheless captures the struggle of untying a tongue knotted by a labyrinth of oppressions to speak one’s truth when he states, “Freedom ain’t nothing but knowing how to say what’s up in your head.”

The sadness one feels in looking at the hardships one has endured after years in the academy can be paralyzing. Paradoxically, the very courage it takes to face the sorrow one feels about the losses is precisely what is required to move towards restitution.

It is awful, to realize how much one sacrifices for promotion and tenure, for health insurance, for shreds of the legitimacy that white male privilege assumes from birth. But in equal portion, it is rewarding to notice that you can and do educate and lead everyone around you, including those who don’t respect you.   In some ways, the perspective from the bottom of the ladder is clearer. You can see everyone else above you as they wrestle with each other for position. It is also humiliating and toxic to have those above you on the ladder excrete on you from up there and tell you it’s just thunder and hail.

The figurative defecation on Black women in the academy takes many hypocrisy laden forms. There is the logorrhea about academe being a place of intellectual freedom, while female students and junior faculty are often subjugated and silenced. There’s the heterosexism that disregards research, writing, teaching and especially service towards the inclusion of LGBTQ issues and persons. There is the confinement of female scholars to educating and not leading academic institutions evinced by the plethora of females in the professoriate and the dearth of us in upper echelons of administration. The subjugation and exploitation of Black female junior faculty is itself a threat to well-being. One is expected to work much harder to earn tenure than those who have tenure, making the option of saying no, even in service of one’s health implicitly nonexistent.

In the midst of the micro-aggressions Black females regularly negotiate in academia, I frequently experience a tightening in my back and neck as the stress toxins flow through me. Before I even cognitively process the disrespect, I recognize what it feels like in my body and note the cumulative impact over time. In White academia, this stress is fueled by the stunning absurdity of having White scholars tell you what is and is not racism and heterosexual White academics attempt to clarify for you what is and is not homophobia. The privilege knows no bounds as they show the teeth of their racism and homophobia by “educating” you about when you are and are not experiencing it.

For those of us whose scholarship focuses on homophobia and heterosexism, there is intellectual isolation as well.  People may nod politely when you describe your specializations, but there is not usually a rush to collaborate. This lack of interest in collaboration may occur in part because some faculty feel threatened and perhaps even ashamed when they consider all those they have left out of their scholarship. If their area is political science and they have never considered the socio political experience of non heterosexuals, they must now reconsider their work in light of all those it neglects. As the junior faculty who proposes that reevaluation, I can be targeted directly or indirectly by the conscious or unconscious feelings they have about the impact of their privilege on their scholarship.

For many Black female scholars, internalized racism meets internalized sexism on the battlefield of Black academe. Sometimes in an effort to prove to White academia that we are just as good, Black academics internalize and legitimize the same hierarchies that have oppressed us for centuries. The ways racism has set us up to believe that there is not enough for everyone can be disguised or confused with collegial competition. Internalized sexism inspires competition amongst women so where one might have had fellow Black female scholars as allies, one sometimes has sisters who are afraid and vicious in their fear.

In Black academia the homophobia can undo one when experienced as the profound betrayal it really is. Et tu Brutus? It is astounding to see the disinterest and resistance that Black scholars who are experts in topics ranging from Black literature to Blacks in criminal justice sometimes exhibit when it comes to grappling with their homophobia and heterosexism and that of their discipline.  It is heart wrenching to see long standing scholars who have led the struggle for Black intellectual contributions to social justice imprison the Black experience in heterosexism and homophobia.

This homophobia is often grounded in and even excused by self serving interpretations of Christianity and an inaccurate assumption of monotheism in the Black Diaspora.  Buddhist Black female scholars are rendered invisible as Black spirituality is codified as either Christian or, less frequently, Muslim. The denial of the diversity of the Black spiritual experience cripples Black scholarship and informs the denial of the diversity of Black sexuality.

The emotional, social, spiritual, and physical costs of these realities are intertwined. I have developed serious back problems, in part from long workdays, stress and extensive hours spent working at the computer. Friends who are experts on social wellbeing have diagnosed me as suffering from “social starvation.” The very fact that I spend so much time engaged with students, colleagues and administrators around academic issues and my remaining time at the computer means that I have little energy to engage socially. After all the work and all the battling, one may often want to just be quiet and rest in whatever spare minutes can be snatched. But this isolation is a perfect breeding ground for ill health.

Ultimately, Black women in the academy are deeply threatened. We are stretched, often to the point of tearing, between two high pressure expectations. One is the cultural adage that “to those who much is given much is expected” whereby we are expected to “lift as we climb” in our families and communities, even as we negotiate the opposing demand to “publish or perish” in the academy.

In light of these realities, I turn to myself and ask “why do I stay on this ladder?”  In daily Daimoku  (Buddhist chanting), I find the answers to be unfolding though complex. I recognize that I have been able to do great things in the service of my vision and that I have had allies and support in doing so. I led the first LGBTQ forum in the 147 year history of my institution, thereby highlighting the contributions of Black non-heterosexual people and addressing homophobia and heterosexism as they impact everyone. I have institutionalized this forum such that it is held annually now. I was able to lead the University’s first interfaith dialogue about Dr. King’s World House vision with representatives from Hindu, Buddhist, Muslim, Jewish and Christian faculty and students. I wrote a grant, the first of its kind to be funded by my University, to do research in Africa, Europe and the Caribbean, conducting focus groups that allowed me to hear and chronicle the experiences of Black LGBTQ people throughout the Diaspora. These are the honors and blessings that have come with the sacrifice.

Mining my spirit for enlightenment, I have been able to unearth treasures of boundless compassion such that I feel genuine appreciation for everyone and everything. Instead of complaining, I commit to using all that is dumped on me to fertilize my wisdom, courage and determination.

The way forward for me is focusing on appreciation, starting with appreciation of myself. If there is a dearth of acknowledgment then I must fill myself with my own. Noted Buddhist Pema Chodron says that awakening loving- kindness is about befriending who we already are.  I appreciate my faith as I still believe there is much hope for academia. Dr. Ikeda says that faith is the most open state of mind of all.  I believe it is possible to write a critical article such as this one and still get tenure, not in spite of it but because of the commitment to truth it exhibits.  I have faith in the integrity of the allies who have emerged and I am inspired by their support. I have faith in the legacy I am contributing to- a legacy of real and comprehensive scholarship that leaves no one out.  Aligning myself with other progressive scholars, I believe that there is time for us to offer each other support.  Venues such as this publication series can help us unite as we pursue a more humanistic vision of the academy, one in which the principal goal is to enrich the humanity of us all. 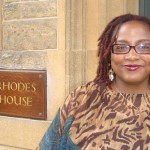 Kamilah Majied, Ph.D. is an educator, researcher, clinician and internationally recognized expert on the impact of oppression on mental health and social functioning. Her research focuses on racism, homophobia, heterosexism and other oppressions, particularly as they impact mental health amongst people of color and lesbian, gay, bisexual, transgender and questioning (LGBTQ) people. Dr. Majied is a clinician with multiple areas of specialization including grief and loss and addressing the mental health challenges faced by stigmatized populations. As a consultant she works to make health and human service agencies more sensitive to the needs of minority populations and more culturally competent with regard to LGBTQ people and people of color. She has successfully assisted various domestic and international organizations in developing programming that welcomes and supports diversity, addresses disparities and meets organizational and community needs. She is currently an Assistant Professor of Social Work at Howard University in Washington DC. Dr. Majied is also the principal investigator of the International Sexuality and Mental Health Research Project (ISMHRP). The goal of ISMHRP is to identify the health and mental health needs and issues of Black LGBTQ people in Africa, the Caribbean, Europe and the United States and to develop resources that augment mental health and advance social justice.

Related ItemsAcademiaBlack WomenHealth
← Previous Story Out of the Shadows: A Conversation with Evelyn C. White
Next Story → Should-ing All Over Ourselves