Black (Academic) Women's Health: To Be in Context – The Feminist Wire

Home / Academia / Black (Academic) Women's Health: To Be in Context

Black (Academic) Women's Health: To Be in Context

My great grandmother used to pay me to talk, about anything and nothing. She just “loved to hear that child speak!” She said my oratory would be my saving grace. My mother said my little red tongue would get me into more trouble than she could save me from.

They were both right.

It is no small thing for a colored girl child to refuse to be silent.

Silence is common to all of the essays in this special forum of The Feminist Wire. When Tamara Nopper, a Feminist Wire champion, thought to recommend me for a guest editorship, I was honored. Little did I know that it was only the beginning of a collaborative journey for which I will always be grateful. I could not have guessed the myriad ways my own biography would be reflected in so many different voices and stories, all of them refusing to be silent even when the price of being heard is so very, very high.

Early in the editorial process I asked the editorial team if we should frame “health” in our call for papers on the subject of Black women academics’ health. I was afraid the broadness of the term would stymie the responses we received. I could not have been more wrong (and Tamura more right). The response was overwhelming. We received autoethnographies, empirical findings, creative narratives, and essays. Their respective authors told of notebooks cataloging years of microaggressions in an almost obsessive bid to control the uncontrollable. Graduate students spoke of the symbolic violence enacted daily in classrooms where they are asked to leave critical parts of themselves behind in order that they be remade and “professionalized.” There were stories upon stories about the physical manifestations of emotional and psychic pain: cancer, fibroids, breakouts, and breakdowns. And there were the stories of the mental anguish whose refusal to be made corporal exacerbates the pain by minimizing its social importance.

There were also stories of redemption and triumph, of mothers choosing to live better for the sake of their children, like Melva Sampson’s essay on raising womanish girls. It’s there, too, in the many essays about women-friends forging bonds that sustain and protect. A sociologist and an organizational theorist to boot, I was particularly struck by the themes of structural violence and social responses to that violence. Several essays spoke of the lack of dignity in the way academic work is currently being restructured to use more adjunct, temporary, and contract labor. These new work arrangements come at a very high cost: instability, diminished labor rights, lack of health insurance, and institutionalized disrespect.  Black women are over-represented in adjunct and lecturing positions. It is not overstating the case to say that the price of making colleges more modern and nimble is being paid in black women’s bodies.

I was also reminded that support can come from the most unlikely of places. So can enemies. Women spoke of the disappointment they experienced when they realized that historically black colleges are not a panacea for racialized antagonism that marks predominately white colleges. I was so affected by an essay on “frienemies” – the women who look like you while actively seeking to diminish and destroy you – that I had to walk away halfway through reading it. It hit too close to home and the wounds of betrayal from black women in the academy were far too fresh for me to read it objectively.

My story could have been all of these stories. The death of the only child I will ever have broke me beyond measure. I can recall, still, the fog of depression that drowns out all rational thought and basic functioning that Mari Morales-Williams speaks of in her essay, “Occupy Myself.”  It was because I had been so thoroughly broken that I left behind one whole life to start another in graduate school. And every day I am grateful for that total destruction of self. Not even academe is bad enough to destroy you when you are already always destroyed. That permanent broken-ness is often the only thing that stands between me and a notebook full of microaggressions stashed in my purse like the one Marcia Allan Owens describes in her essay. Hers is a compulsion I understand. The need to order the disorderly, to make sense of the nonsensical is real and ever-present.

I turn often to social media to broadcast some irrational remark from a white colleague about how she wants to be black because “black women have always worked!” as if we agreed to be enslaved so that we could be good feminists.  It’s the professor in quantitative methods who attributes your correct answers to the only Asian male in the class who couldn’t find an output if it landed on his head. Or, it’s the time when I submitted my first graduate school paper only to be asked who helped me write it. Or, when it is assumed that I am a first generation college student by a black woman scholar. You want to not be alone at such moments. You want a record of your experience if only as evidence that you did not imagine it all. One woman’s microaggressions notebook is another woman’s twitter account.

It all prompted me to ask something I’ve asked before: where in the world can a black woman be?

The answer, of course, is nowhere and anywhere.

We be when we are vocal. We be where we stand and where we lie down for awhile. We be in the pages of our journals, our yoga practices, our spiritual safe houses. We be when others demand our silence, when doctors deny us the right to be sick, when institutions deny us the right to get well, when insurance companies deny us access to medical care, when women deny us allies, when men deny us humanity, when academe denies us tenure, and when our society denies us basic human dignity.

I never learned how to shut up. My mother was right about that. My little red tongue has gotten me into plenty of trouble in my life. I’d wager it’s not done yet.

It is a good thing because academia is not for the silent, even when it structurally demands your silence.

It is also a dangerous thing because the very tool of salvation – our voices – is the tool that would be used to dismantle us.

We cannot speak except in ways formatted for journal articles and book publishers. Our voices must first be vetted (and erased, re-written, re-packaged) in peer review, no matter that we don’t get to designate who should be our peers. Our voices are constrained in new pedagogical models that privilege sanitized curriculum. Our voices are not allowed a vote in faculty meetings until we get tenure. After tenure our voices are a minority and, thus, often overruled.

What would happen if we could speak, uncensored and without reprisal, on our own behalf? Would we remember what it is to be well, both in body and spirit?

The Feminist Wire set out to discover just that. We drew inspiration from Sister Scholars like Emilie Townes and Darlene Clark Hine, both of whom wrote love notes to us as we embarked upon this journey.

My work must be put into perspective, as a part of who I am as a thinking, feeling, sensing human being in a creation that is vast, and my mind and body are welcomed into that vastness.  Moving our work into the larger context of what it means for us to be alive helps us see the importance of cherishing our body and minds.~Emilie Townes

Demands are daunting and  Black women academicians should be especially mindful of the need to take care of themselves.  Health and wellness are essential and all of our sisters, both in the academy and beyond, must become much more cognizant of the destructive consequences of too much stress from too many sources. The goal, seemingly too slippery to grasp firmly in our hands, or so it seems, is to create balance in our lives and thus maximize our joy, wellness, and productivity.~Darlene Clarke Hine

Over the next two weeks you are invited to a conversation and a revival of black women’s voices that contextualizes the experience of black women, health, and the academy. 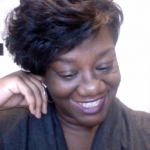 Tressie McMillan Cottom is a PhD candidate in the Sociology Department at Emory University. Broadly, Tressie is interested in organizations, education, labor and stratification. Currently, her research examines the implications of for-profit colleges being number one granter of bachelor’s degrees to African-Americans. She also studies the interaction effects of gender, poverty, and motherhood status in these enrollment patterns. Why do students choose for-profits and to what ends?

Her public writing has been published in Inside HigherEd, Huffington Post, The Nation, Contexts, and The Feminist Magazine. She is a Public Voices Thought Leadership Fellow, a researcher with the Research Network on Racial and Ethnic Inequality at Duke University, and a former Engaged Research Fellow with Emory’s Office of University-Community Partnerships. She also continues to consult with national and international clients on education policy and organizational effectiveness.