Women Fight for Their Rights in the New Tunisia 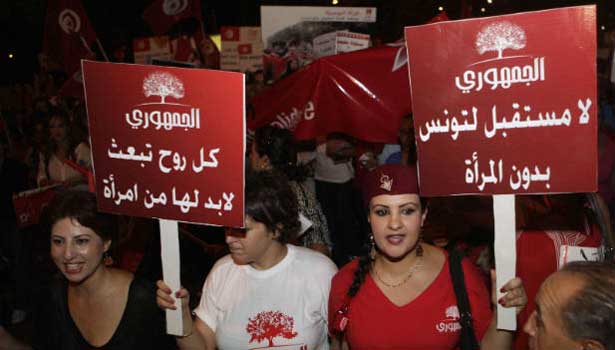 In Tunisia, a country that has been labeled “the most secular and progressive of the transitioning countries,” that took part in the Arab Spring uprisings, deep tensions exist between religious and secular elements in society.

A bill recently proposed in parliament sparks concern for many. Filed by Ennahda, the country’s leading Islamist party that positions itself as a champion of democracy, the bill defines certain topics as sacred and proposes putting offenders behind bars. According to AFP, topics off limits include “subjects held sacred in the three Abrahamic religions, including God and the Prophet Mohammed, the earlier prophets, the holy books, mosques, churches and synagogues.” In theory, this would mean that any laws or other policies justified by the sacred topics could not be challenged, either informally through street protests, or formerly in courtrooms.

New language in the draft constitution, and negative reactions to it, also highlight Tunisians’ conflicting views about the role of women. The language describes a woman as a “complement with the man in the family and an associate to the man in the development of the country.” Out of the 20-person committee overseeing the drafting of this language, twelve members voted for it, nine of them from Ennahda. Yesterday, thousands of Tunisians protested against the language, some of them demanding that the language from the 1956 constitution be used instead, as it holds men and women equal.

Tunisia is a fledgling democracy with a long history of friction over the role of religion in society. In a short time, it has gone from having just nine permitted political parties during former president Ben Ali’s rule to over 110. In March, Ennahda’s leadership took a courageous stance in announcing that Sharia will not be the basis of Tunisia’s new constitution, a decision that drew criticism from more conservative Islamic groups such as the Salafis. Without a doubt, Ennahda faces a complicated and high-stakes balancing act, and its proposed blasphemy bill might be a calculated effort to defuse this increasingly tense issue. But if it hopes to hold the center, it must take an unambiguous stance against the violent tactics increasingly being used by religious extremists to silence their secular opposition.

Tunisia’s constitution drafting committee just announced that its constitution will not be ready in October as scheduled, and that the committee will need until at least February to complete its work. In the coming months, expect to see more disruptions as competing sides harden their incompatible visions for the country.