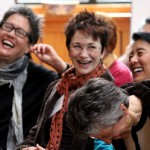 The first ever VORTEXT event, Hedgebrook’s weekend retreat for women writers, began with Bastard out of Carolina author Dorothy Allison growling from the keynote podium as though a preacher at a pulpit for the ladies to “Write me a book!”

“You have the right to be here! You own your stories!” said Allison. 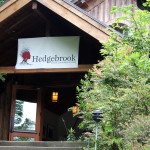 Fifteen minutes into the retreat, attendees were already dabbing at their eyes, some furiously scribbling in notebooks.

While some people may question the need for women-only writer retreats such as this one, the lack of gender equality in the publishing world makes a strong case. Despite many advances over the years, women writers still struggle to receive the same level of recognition given to male counterparts. The Vida organization reported in a 2010 study that titles by women authors receive less than 30 percent of the reviews in major publications from the New Yorker, to Harpers, to the Paris Review.  This is despite the fact that women authors account for 56 percent of the titles on the best-seller lists. Given these numbers, it’s no wonder women writers seek welcoming places to grow their confidence and craft.

As a writer who has struggled off and on over the years to keep up my craft despite distracting careers and the many challenges finding time in my busy single-mom-with-a-plan life, the retreat seemed to me as though a dream. Here, all around me, were the authors who had gone before me, reaching back, telling me to hurry, to work, to strive. There were women asking to hear what I’d written—an audience! The teachers and my peers swaddled me in encouragement and filled me up with inspiration. 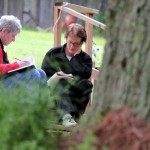 We ate together, wrote together, and shared new works together. After one officially scheduled reading, we conspired to convene again in a farmhouse kitchen to open even more bottles of wine, lay out more plates of food, and continue readings new pieces until well past midnight.

“The energy of the weekend was transformative and revolutionary. It’s amazing to see the change that happens in women, when we nurture the nurturer,” said Hedgebrook Executive Director Amy Wheeler. “Many writers arrive timid and unsure of themselves. Then they spend time with the authors and in discussions about writing and life. By the last day, they have pages and pages of new writing and read bravely in front of an uproarious audience.”

The benefits for the women attending the VORTEXT retreat were obvious and numerous.

Abi Tschetter, who said she had been suffering from a two-year writers block, spent one craft session writing furiously in her notebook and frowned when Ruth Ozeki called the group to the next exercise. “This hasn’t happened to me in years,” she said. “I just can’t stop writing!”

VORTEXT ended with a wine and cheese reading and reception at the lush and peaceful Hedgebrook property. The audience clapped, moaned, and cheered throughout the readings, some authors onstage for the first time ever, some published veterans. The workshop leaders closed the conference with a karaoke rendition of “We Are Family.” The entire room of women hopped to their feet and formed a snaking can-can line. 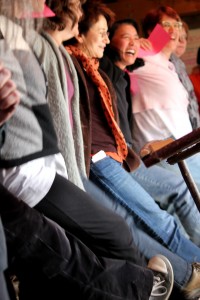 Arms draped around each other, we yelled, “I’ve got all my sisters and me.” The room buzzed with energy as we kicked our legs in something approximating unison, a grand, sisterly pep rally for the writing we must continue when we return to our homes. 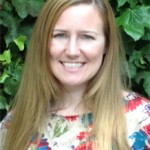 Kelsye Nelson is co-founder of Writer.ly, leader of the Seattle Daylight Writers (a 350-member writing group), and recently took on the Marketing and Communications role at Hedgebrook, a retreat for women writers. In her copious spare time, she teaches nonprofits how to use social media, travels with her daughter, walks her giant dog endlessly around city blocks and sometimes, possibly, even writes. She’s kinda famous on twitter: @Kelsye