Until I was about six years old, my father and I had a ritual of spending Saturday mornings in Central Park together. My mother was a doctoral student, and so our time out of the house gave her a chance to get her dissertation done. He called the outings our “adventures”— we’d take the train from our tiny Lower East Side apartment and get out at the Park. Then he’d let me lead the way to whatever playground, statue or fountain called my fancy at the moment.

One morning deep in the summer, just after I turned five, my whim led us to the rowing pond in the middle of the Park. It was so hot, the sky so cloudless, that I can still remember the sting of the sun against my thighs. I also remember the unmixed sweetness of the frozen lemonade my father bought me to stave off the heat, and the pads of stickiness it left when spilled over my fingers, hands and legs. 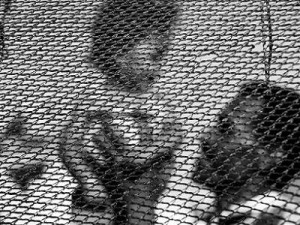 We rented a boat and rowed out to the middle of the pond. I was a big child, and I remember being nervous that I would somehow sway the boat off balance and fall out. I wasn’t much of a swimmer, so the thought of being out in the middle of the water with nothing to hold onto terrified me. My father assured me I would be okay, and rowed further into the pond.

We’d almost reached the dead center of the water when a bee started buzzing around our canoe. I had never been stung before, but the lore about bee stings was so thick among my kindertarden classmates that I was sure a sting would bring the worst possible pain imaginable. When the bee flitted toward my citrus-glazed leg, I panicked and lurched forward. The boat swayed under me and I was terrified that I would fall into the water.

“Stay still,” my dad said, the bee buzzing so close to my skin I thought I could feel its wings. “Don’t move. If you stay still, it’ll go away. It won’t sting you. I promise.”

He promised. So I sat frozen, willing all of my nerves to calm down, to stay still. I remember the feeling of the tears mixing with sweat on my cheeks, both sliding down my face, past my mouth, which I strained to keep shut. Finally, my shoulders stopped shaking, and I felt myself fall still. I breathed. I looked at my father, then at the bee, then at my father again. He gave me a reassuring look, and I let myself relax on the bench.

And then the bee stung me.

But as much as that bee sting taught me about pain, it also taught me about what it means to care for another person. Because when I looked up at my father’s face after being stung, I saw that he was just as hurt as I was. I saw all the disappointment, all the helplessness, and all the fear of a young father unable to protect his child, a person unable to keep a person they love from hurting.

I do not remember what the bee sting felt like, although I’m sure I did for a while. What I remember is the shock of my father’s face that morning, how it was painted with a well of emotions I couldn’t understand then, but am glad to recognize now.