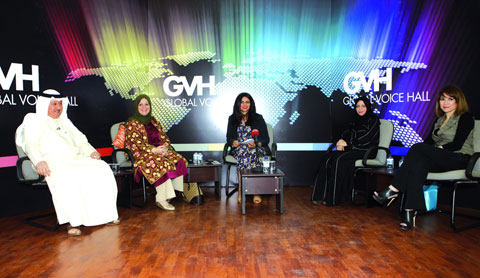 The Global Voice Hall (GVH) held its first forum in Kuwait titled ‘The Absence of Women in Politics….’ on Sunday at the Graduates Society. The speakers at the forum discussed the main reasons why there were no women in Kuwait parliament and cabinet. They also discussed the absence of women in top positions in the Arab world. Dr. Saoud Al-Anezi, Chairman of the Graduates Society blamed the absence of woman in Kuwait politics on the Islamists and infighting among the women.

“There seems to be an ongoing campaign aimed at excluding women from the political arena. Also during the last election, some women candidates took part just to make other women fail. More so, the short period of time the women MPs stayed in politics made it difficult to evaluate their performance. For instance, some of draft laws the women MPs proposed and submitted were not approved,” he explained.

Regarding the absence of women at the top positions in the Arab countries after the Arab Spring, Al-Anezi said that the issue is more complex than thought. “The young people who participated in overthrowing the autocratic regimes are basically being left out. The presence of these groups is very important in our Arab society,” he added.

Dr. Anoud Al-Sharikh, a researcher at the International Institute for Strategic Studies in the Middle East said that Kuwait democracy should serve as an example in the Gulf region. “Freedom of speech and expression and the political participation through elections were part of the Kuwaiti political culture since 1963. This gained more recognition after the Kuwaiti women gained their political rights in 2005,” she pointed out.

Dr. Lubna Al-Qadi, a Professor of Sociology and Director of the Woman’s Studies Unit at the Kuwait University lamented on the absence of woman MPs in last elections. “Male candidates were looking on how to succeed and didn’t fulfill the promises they gave to women candidates. We need the media to highlight their achievements before the next elections,” she stated.

Related Items
← Previous Story What We Aren’t Talking About When We Talk About ‘White Privilege’
Next Story → What do HPV completion rates say about women’s access to health care?