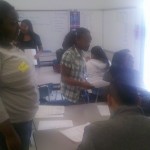 April is sexual assault awareness month. It also marks the global observance of Denim Day for sexual assault survivors. Black and mixed race women have some of the highest sexual assault rates in the nation. Yet, recently, when young women of color in my class at Gardena High School in South Los Angeles spoke on the disproportionate number of women of color victimized by sexual violence they initially trotted out stereotypes like “mixed race women are more likely to be raped because they are the ‘prettiest’ and “black women get assaulted more because they have ‘big butts.’ This intersection of internalized racism and sexism is most potent when youth grapple with how representations of young women of color in the media normalize sexual violence.

The normalization of sexual violence breeds silence in the classroom. In the clockwatching ten minutes-before-the-bell-rings clamor of my peer health workshop of 11th and 12th graders there is silence, deafening and thick as quicksand. I have asked them a question about the widespread use of the words “bitch” and “ho” to describe young women of color on campus. Several boys are holding forth in response. They are the same four opinionated boys who have been the most vocal throughout these sessions, always ready with a quip, a deflection or, sometimes, serious commentary that reveals deep wisdom. They are bursting with perspective on this topic, but the girls in the room are silent. Some twist in their seats, some study the tops of their desks in calculated boredom, transporting themselves outside of the room, slain by the language of dehumanization. Finally a few girls chime in and say they use the terms casually with friends, as in “my bitch or my ho,” supposedly neutralizing their negative connotations akin to the way they use the word “nigga.” Some claim the words are justifiably used to describe “bad girls” who are promiscuous and unruly, not realizing that black women have always been deemed “bad” in the eyes of the dominant culture, as less than feminine, as bodies for violent pornographic exploitation. When I wondered aloud whether white women call themselves bitch and ho as terms of endearment I got uncertain responses. My guess is that they don’t, not because white women are necessarily more enlightened and self-aware than women of color on gender, but because white femininity is the beauty ideal and hence the human ideal. Despite the misogyny that pervades American culture there is inherent value placed on the lives of white women. Every aspect of the image industry affirms their existence, and the spectrum of culturally recognized white femininity extends from proper and pure to “sexually liberated.”

This is exemplified by the tabloid media’s obsession with missing white women and white girls. Plastered on websites like AOL, relentlessly rammed down our collective throats in titillating morsels with whiffs of sexuality and scandal, poster child Caylee Anderson and company are a metaphor for Middle America’s Little Red Riding Hood fetishization of white femininity. Tabloid narratives of imperiled white females highlight the suburban virtues of white Middle America and not so subtlely evoke the social pathologies of the so-called inner city. Indeed, the spectacles of grief, mourning, and community outrage trotted out on CNN and FOX not only program viewers to identify with the injustice that has been done to the victim and her family, but to her community. In the world of 24-7 media these victims become our girls, our daughters, while the “bitches” and “hos” of the inner city symbolize the disorder and ungovernableness of an urban America whose values must be kept at bay.

In many regards this is part of the same “post-feminist” trend that tells women to sit down and shut up, to internalize the values of white supremacist capitalist patriarchy and stay in their place. A generation of Bush militarism and corporate reign over media has turned sexualized violence against women into a billion dollar industry, as illustrated by global romance with gangsta rap, violent video games and Internet pornography. Yet the desensitization of young black women to these trends is perhaps the most painful. When I talk to my students about the staggering rates of sexual assault and intimate partner abuse in black communities they are quick to judge themselves and their peers for inciting male violence. Unable to see themselves and their lives as valuable they slam other girls for being “hoochies” and sloganeer violent misogynist lyrics without a second thought. Awareness about the relationship between pervasive violence against black women in the media and male behavior is virtually nonexistent. 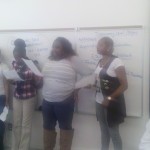 examine the media, school, and community images that promote sexualized violence against women of color. Until we change the self-hating mindset of many young black women, silence—as the gay HIV activist saying goes—does equal death, and we are poised to lose another generation to a media-colonized sense of self-worth.