While watching Man v. Food, I observed a very interesting relationship between men and non-human animals. The situations I’m going to describe were not unfamiliar to me, yet I could not recall a particular moment in which I had seen anything just like it.  On more than several occasions during the twelve episodes of Man v. Food that I analyzed, Adam Richman, the show’s star, acts or compares himself to an non-human animal or a “beast.” Richard A. Rogers explains, “‘The beast’ is a common trope signifying primitive masculinity in its positive and negative forms” (288).

I found these moments of Richman acting like an animal interesting and thought provoking, as well as problematic. Hegemonic masculinity relies on as well as exploits non-human animals in order to perform as “virile.” This relationship draws a tie between men and nature. Yet, the basis of hegemonic masculinity depends on the dichotomy of nature/culture, irrational/rational, and animal/man. Man’s power and rationale to dominate comes from a presumed higher ground, something beyond nature and animal. So how do these analogies of man as “bull” or “beast” or “bear” strengthen notions of dominant masculinity rather than derail them?

One challenge in particular exemplifies the man as beast analogy. The challenge takes place in Portland, Maine (Season 3, Episode 14). During this challenge, entitled the “Manimal,” Richman must consume eight cheeseburgers, two hotdogs, a pile of fries, a soda, and a milkshake. The challenge begins with a Discovery Channel-esque ethnographic clip of footage that animalizes men eating hamburgers. The footage jumps from man to man, each consuming beef. The sound is cut and replaced by Richman stating things such as “Here we spot some hungry manimals who have descended upon the Tradewinds Café, to feed.” There are also various background jungle sounds such as birds, bears, and monkeys.

When the challenge truly begins and food is being brought to Richman, he states, “It is time to heed the call of the wild.” This scene is supplemented with his impressions of a bear and, as far as I can discern, a gorilla. As the challenge continues, he must “summon the beast within” to “defeat” the meal and finally, “man conquers the beast.”

This scene is obviously a reference to a more primitive masculinity: one in which man was more like an animal, perhaps when man still hunted his food rather than bought it in clean packages obscuring the animal origins. I find this display, and others like it, which finds pleasure and enjoyment in primitive masculinity, rather disturbing. In my view, such primitive performances of masculinity are a throwback that erases feminist work. Perhaps some men might find the Stone Age more ideal, and act on it, like Richman does here. Though he still remains modern in most ways, his use of carnal, primitive performances of masculinity through the act of being a “beast” conjures images of a pre-feminist time. This is so problematic because it evokes images of women as less than men; it essentially erases all that women have fought for in terms of gender equality.

When I first began watching Man v. Food, the use of awards, money, prizes, and walls of fame confused me during challenges. Almost every challenge had some sort of prize or recognition; whether it was a t-shirt that denoted the wearer a winner, a picture on the “wall of fame,” or a monetary reward. As I began to situate these occurrences in a larger context, I saw them as subtle encouragement to eat meat. About the same time I began thinking about this, I started to realize that seemingly harmless comments by characters on the show shamed vegetarianism.

As many academics acknowledge, veg*anism (veganism or vegetarianism) is a threat to dominant ideals of masculinity. Perhaps not consciously acknowledging this threat, some men try to curtail veg*anism. Notably, Potts and Parry examined such a phenomenon through negative and violent online comments by men regarding vegan women who chose to not have sex with meat-eaters. The use of awards for meat-eating and subtle vegetarian shaming comments in Man v. Food aim to do the same thing: discourage veg*anism, which is conceptualized as feminine.

During Season One, Episode Seven entitled “Atlanta,” Richman visits the Vortex Bar and Grill. The segment begins with Richman speaking to a waitress, asking her what the rules are for the waitress’s attire. She responds “hot and sexy,” the camera’s focus then goes to her legs and traces her body. Richman (who is standing so close to the waitress that his left arm is out of view, behind her body; I first believed that it was around her waist, but looking closer did not see his hand) then replies, “Well, you’ve checked both boxes.” He then proceeds to the kitchen to watch burgers being made by a (male) chef. While the burger is being made he states, “This isn’t a burger, this is an experience, this is a rite of passage…”

Disregarding other religious implications that would be interesting to note involving bacon on the burger, exclaiming that eating a burger is “a rite of passage” excludes all veg*ans. Again, in Episode Twenty of Season Three, Richman states that going to Blimpy Burger and eating a hamburger is a rite of passage. To these statements, I ask: A rite of passage to what? To being a citizen, to being human, to being a man? Regardless of his vague statements, it is implied that if someone does not eat these hamburgers, they are missing out on important life experiences.  They are not on par with people who eat meat. They are seen as something “less.”

Men who do not eat meat are often ridiculed and deemed less virile, somehow less than men who do eat meat. I have experienced such notions in my own life, once hearing an acquaintance’s heterosexuality called into question because of his recent choice to become a vegetarian (heterosexuality being a cornerstone of hegemonic masculinity).

Continuing on the ideas that Potts and Parry explored, in Episode Nine of Season One entitled “New York,” Richman exclaims (referring to a corned beef sandwich), “If ya don’t like it, there’s something wrong with your mouth.” Thus, someone who doesn’t eat meat is not seen as a person who has made a rational decision about his or her diet, but rather as someone who is “wrong.” Therefore, the rejection of meat is not a choice; rather the person is socially disabled.   If they were “right” and presumably normal, they would like meat. Not only is this problematic because of its shaming of vegetarianism, but it also takes away the agency of vegetarians. They are not seen have the power to choose a lifestyle they deem appropriate without their normalcy and place among “the rest of us” being questioned.

The use of prizes to reward excessive meat eaters adds to the separation of meat eaters and non-meat eaters, as well as to the shaming and rejection of vegetarians. Extensive value is constantly being placed on meat eating during the show, deeming it a worthy and important endeavor. A vegetarian could never win these prizes and would never have the opportunity to even be on the show. The series essentially projects that if one eats massive amounts of meat, in a shocking display of hegemonic masculinity, they will be rewarded.

Consuming and producing meat is largely socially considered a masculine endeavor in the United States. These ideas are partially perpetuated through media such as Man v. Food. The episodes of Man v. Food I explored above help allow these dominant narratives to persist.  Though some may challenge the scope of my analysis, the narratives I have explored are significant. During a recent class presentation on my research, I encountered an adverse reaction by a handful of classmates. When people are confronted with counter ideas that threaten cultural norms, they often feel personally attacked.

Many ideas about meat consumption and its ties to masculinity are so ingrained in people’s minds that they feel personally offended when they are opposed. I would like to stress that the accounts I analyzed above are not trivial. Together, they reinforce over and over again sexist stereotypes of food and behavior while sustaining hegemonic masculinity. So much so that meat-eating and hegemonic masculinity seem natural, rather than socially contrived. Mediated images and texts, like Man v. Food, perpetuate dominant ideals; and without being challenged and critically examined, they continue.

Rogers, Richard A. 2008. “Beasts, Burgers and Hummers: Meat and the Crisis of Masculinity in Contemporary Television Advertisements.” Environmental Communication, 2(3): 281-301. 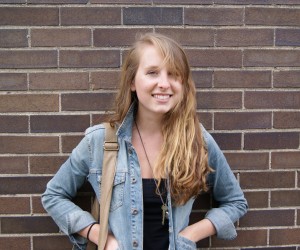 Mari Kate Mycek is a senior at Purchase College studying Media, Society, and the Arts.  She is currently writing her senior thesis entitled, “Chorizmos: Media Representations of Meat and Masculinity.” She is also working on the second issue of her zine titled, “Eat This: Embracing Feminism and Vegetarianism.”