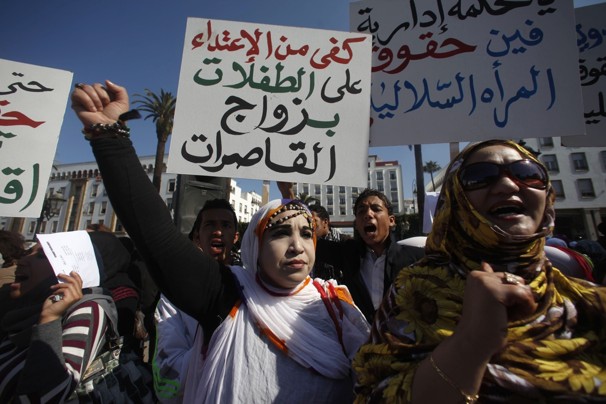 As women the world over gathered last week to celebrate the 100th Anniversary of International Women’s Day, women in Morocco gathered to protest the death of a 16 year-old girl who took her life after being forced to marry her rapist.

The women’s rights activists were there on behalf of Amina al-Filali, a teenager from the small town of Larache, near Tangiers, who died the previous Saturday after drinking a lethal amount of rat poison. Amina committed suicide following what her father described as a series of brutal beatings by her husband, whom local authorities had pressured her to marry after he allegedly raped her. Witnesses say her husband became so outraged when she drank the poison he dragged her down the street by her hair. She died shortly afterwards.

The Moroccan penal code was updated in 2004 to give women greater rights. But in the case of rape, the burden of proof is often on the victim to prove that she was attacked or risk prosecution for debauchery. While rape is punishable by five to 10 years in prison under Moroccan law, it rises to between 10 and 20 years if the victim is a minor. But a rapist can marry an underage victim in order to preserve the honor of the woman’s family.

According to the victim’s mother, who claims that she found her daughter lying in the forest following the initial sexual assault at knifepoint: “”I had to marry her to him, because I couldn’t allow my daughter to have no future and stay unmarried.” Apparently, the local court concurred, and pressured the victim’s father to consent to the marriage despite his own misgivings.