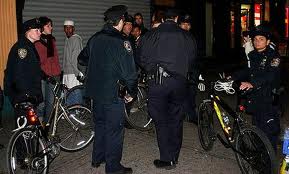 Nicholas K. Peart, 23, knows all too well what it means to be simultaneously blotted by race and gender.  He has been stopped and frisked by New York City police officers at least five times.  For those who perpetuate the fantasy that we live in a post-racial (or post- #anyotherformofbigotry) society, think again.  At the turn of the 20th Century, W.E.B. Du Bois articulated that being black was akin to being a problem.  This still stands true over 100 years later.  Race (and gender) continues to be a venomous marker of difference, which brands its targets with great conviction, thus not only stimulating anxiety but demanding an endless response–from those so marked.

WHEN I was 14, my mother told me not to panic if a police officer stopped me. And she cautioned me to carry ID and never run away from the police or I could be shot. In the nine years since my mother gave me this advice, I have had numerous occasions to consider her wisdom.

One evening in August of 2006, I was celebrating my 18th birthday with my cousin and a friend. We were staying at my sister’s house on 96th Street and Amsterdam Avenue in Manhattan and decided to walk to a nearby place and get some burgers. It was closed so we sat on benches in the median strip that runs down the middle of Broadway. We were talking, watching the night go by, enjoying the evening when suddenly, and out of nowhere, squad cars surrounded us. A policeman yelled from the window, “Get on the ground!”

I was stunned. And I was scared. Then I was on the ground — with a gun pointed at me. I couldn’t see what was happening but I could feel a policeman’s hand reach into my pocket and remove my wallet. Apparently he looked through and found the ID I kept there. “Happy Birthday,” he said sarcastically. The officers questioned my cousin and friend, asked what they were doing in town, and then said goodnight and left us on the sidewalk.