On Black/Brown Girlhood, Black Feminism, and the Arts: A Conversation with Aimee Cox and Ruth Nicole Brown: Part I – The Feminist Wire

Home / Culture / On Black/Brown Girlhood, Black Feminism, and the Arts: A Conversation with Aimee Cox and Ruth Nicole Brown: Part I

On Black/Brown Girlhood, Black Feminism, and the Arts: A Conversation with Aimee Cox and Ruth Nicole Brown: Part I

Introduction: TFW Editorial Collective member, Darnell L. Moore, recently facilitated an insightful and incite(ful) dialogue on Black/Brown girlhood with scholars/artists/activists Ruth Nicole Brown and Aimee Cox. This two-part conversation seeks to elevate the narratives and life worlds of young Black/Brown women, which tend to be muted or wholly ignored in adult-centered writings, within the frame of Black feminist scholarship and praxis. The following is the transcript from Part I.

TFW: Can you say a bit about the work that you are engaged in with Black/Brown girls?

Aimee:  ‪It is really difficult for me to disconnect my “work” with Black/Brown girls from my life in general. I have always had the sense that there was a particular young woman of color point of view/world view or theory of the world that I knew was powerful and transformative, but didn’t quite have the language to articulate. This was before I knew anything of Black feminism.

But, it was really when I started dancing with Ailey II and working with young people in middle and high schools that I was reminded of the power and wisdom of young women of color. There’s is something so deeply insightful about seeing the world from the perspective of youth, femaleness and blackness.

Ruth Nicole: Oh, yes, Aimee! Coming together (and falling apart) in the name of Black girlhood is totally exciting and brings so many different kinds of people and personalities in closer contact with each other to focus on the very important task of affirming ourselves and plotting ways to intervene and recreate better lives for Black girls.

Aimee: I became very close to a group of young women residents in a homeless shelter for young women in Detroit, MI, while conducting fieldwork on the strategies young black women use to become socially and economically mobile for my dissertation. The young women were brilliant and courageous in ways that belied their age. They were navigating all sort of educational, social service, employment and family institutions to craft a unique vision of success for themselves and…they were artists!

Ruth Nicole:  ‪Aimee, you are making me think about origins. I created and continue to organize a space called Saving Our Lives Hear Our Truths, affectionately known as SOLHOT.  In this space we attempt once a week (or every two weeks depending on the site) to celebrate Black girlhood in all of its complexity. The ultimate work is self-work, in relation to others who radically care and courageously act to do as the name suggests, save lives (our own) and facilitate the hearing of truths (many, multiple, and contested). 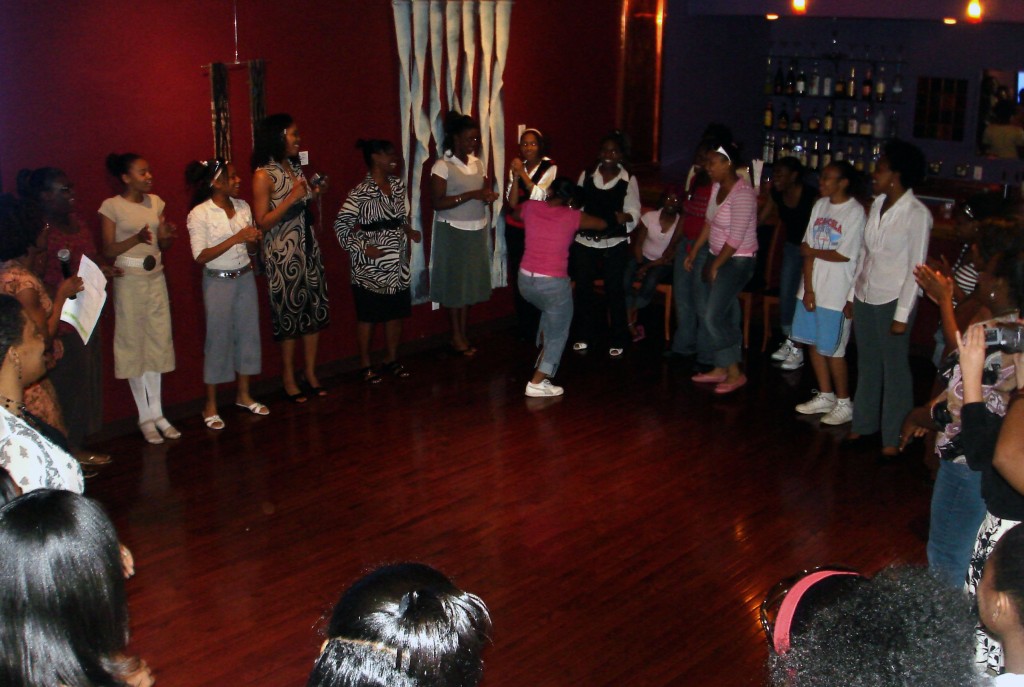 If this sounds too poetic that is because it is. It’s also academic in the sense that practice and theory are central to SOLHOT. It may also sound familiar, but it’s unique. I’m very particular that it is not spoken of as some kind of generic after school program, because SOLHOT engages the spirit and the sacred.

But, like Aimee I’ve been performing SOLHOT—a Black girlhood perspective—since I was very young and wrote poems for my aunts. I wrote poems about my life like around 7 or 8 years old that I insisted on sharing at our family functions.

TFW: Performance, and the study of performance, figures prominently in your programs and research. In what ways have you witnessed performance and the arts shape the young women you’ve worked with?

Aimee:  ‪Well, to be honest, I would have to say that the young women I’ve worked with in both Detroit and Newark have changed the way I think about the generative potential of performance and the arts. ‪I was trained in dance. I studied classical ballet intensely from the time I was 5 till the present day. Dancing to me was something you learned from someone else and was about a certain professionalization. 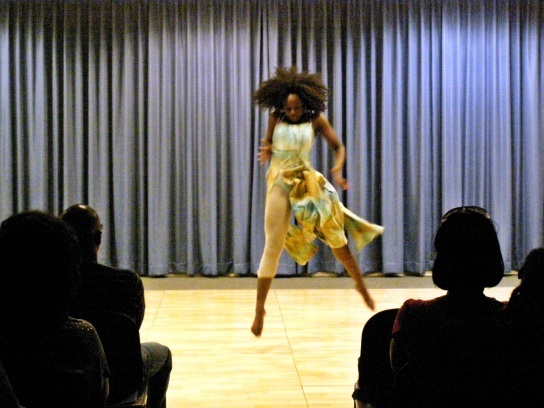 The young women in BlackLight have reminded me of the true intention of the arts: to express using your own unique voice; to define and solidify community; to engage and challenge yourself and others; to offer an unapologetic vision of the world around you. Most of the young women in BlackLight come in with this philosophy and grow stronger and more adept at identifying social injustice through the development of their art with one another in community with other young women.

Ruth Nicole:  SOLHOT often does some kind of public event every spring. We think about what we want to make public that represents our shared time. We have done photography exhibits and theatrical performances.  We always have the arts, because we are artists. I can think about the stories people have connected to, that they would not otherwise care about because they had to live with the words/memorize them, recite them believably and there’s power in that. I mean we dance as well, but how it has shaped the young women is a hard question to answer.

Aimee:  ‪I agree with Ruth Nicole in terms of finding it hard to identify how much the performance or arts practice shapes young women as discreet from the process of being in dialogue with one another, having a space where your Black female self is celebrated, having a place where people are listening to you and not just hearing you, but responding to you and making changes because of what you have said.

But, if you think about it, creating art is really all of these things, no?: being visible and heard, creating new spaces and possibilities, and redefining the terms of our existence.

Ruth Nicole:  ‪I also know that many people now think themselves poets, storytellers, photographers, actors, artists, ONLY because they discovered that about themselves and/or were told that in SOLHOT.

Aimee:  ‪Yes! Ruth Nicole. There is something wonderful about hearing a young woman say, “well, I am not a poet but…” and then bust out this tremendously lyrical and politically powerful poem.

TFW: What insights have you gleaned from your work with Black/Brown girls that complicate or confirm prevailing perceptions of them perpetuated through media and scholarship.

Aimee:  ‪It is so easy to rely on the fact that these young women make magic happen with very little bells and whistles because they and we make art out of necessity. But they deserve all the other stuff that is not just about voicing and struggle and survival and resilience which is so often the urban or rural black girl narrative.

Ruth Nicole:  You are right, Aimee.  I am a minimalist, but the girls and some of the homegirls I work with are more bling-alicious.  Balance is necessary. As long as we have something of substance and the process is SOLHOT, I will do everything possible to get the bells and whistles because we deserve that too. Sometimes we are denied for superficial reasons though, and that hurts.

There is a literature that I cite that helps tremendously to frame the work we do in SOLHOT. For example, I think of Aimee’s work and the work of Anita Harris, Janie Ward, Joyce Ladner, Gwendolyn Pough, Joan Morgan, Nikki Jones, Kyra Gaunt, Maisha Winn, Jody Miller, etc.  I mean if you want talk about literature that gets the complexity of Black girlhood then immediately I think of Toni Cade Bambara, June Jordan, bell hooks, and Black Artemis.

Aimee:  ‪I recently reviewed two books about Black girls and violence. And, although the authors call for a fuller more complicated more textured understanding of Black girlhood, we rarely get that. I think that most of the scholarship also denies that fact that young Black women are very much aware and responsive to how their lives are framed in the media, as well as through policy and academic discourse. They are very cognizant of the pervasive narrative that others use to wholly define their lives.

Ruth Nicole: Yes, Aimee, especially with the more positivist work, I don’t recognize the girls I work with in that [scholarship].

Aimee:  ‪I mean it is hard to think through, write about and say something compelling about folks’ full beautiful and contradictory humanity. I mean harder at least than identifying and analyzing so called dysfunctions.

Aimee Cox, Ph.D is a cultural anthropologist and assistant professor of Performance and African and African American Studies at Fordham University. She is also a dancer and choreographer formerly with Ailey II. Her current book project is entitled, Shapeshifters: Black Girls and the Choreography of Citizenship. 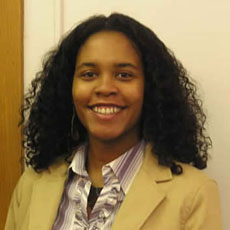 Dr. Ruth Nicole Brown is a dynamic writer, researcher, performer, mentor and instructor. She is an assistant professor in the Gender and Women’s Studies and Educational Policy, Organization and Leadership Departments at the University of Illinois at Urbana- Champaign. Her research documents, analyzes, and interrogates Black girls’ lived experiences as it intersects with cultural constructions of Black girlhood.  More specifically, Dr. Brown’s scholarship interests include performance studies, girls’ studies, youth cultures, and qualitative methodology. Her first book, Black Girlhood Celebration: Toward A Hip Hop Feminist Pedagogy (2008) was published by Peter Lang.