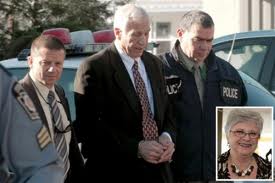 In a statement released by her attorney, Dottie Sandusky claims her husband is innocent of sex abuse and the accusers are lying.

I want to thank our children, our family, our extended family of former Second Mile participants, and all our friends for standing by us through these difficult times. Jerry and I want to express our sorrow for all the hurt that has come to those who have supported us and our beloved Penn State and State College Communities.

I have been shocked and dismayed by the allegations made against Jerry, particularly the most recent one that a now young man has said he was kept in our basement during visits and screamed for help as Jerry assaulted him while I was in our home and didn’t respond to his cries for help.

As the mother of six children, I have been devastated by these accusations. I am also angry about these false accusations that such a terrible incident ever occurred in my home. No child who ever visited our home was ever forced to stay in our basement and fed there. All the kids who visited us ate with us and our kids and other guests when they were at our home. Our children, our extended family and friends know how much Jerry and I love kids and have always tried to help and care for them. We would never do anything to hurt them. I am so sad anyone would make such a terrible accusation which is absolutely untrue. We don’t know why these young men have made these false accusations, but we want everyone to know they are untrue.

I continue to believe in Jerry’s innocence and all the good things he has done. Jerry’s many success stories with his Second Mile kids and positive memories of those kids keep me going. I am asking everyone to please be reasonable and open-minded until both sides of this case are heard, and Jerry has the opportunity to prove his innocence.

Jerry Sandusky faces more than 50 sex abuse charges, stemming from accusations by at least 10 boys.  The abuse is said to have occurred in his home, on Penn State property and elsewhere.  Sandusky maintains his innocence.