Mass Evictions at “Occupy” Camps around the Country – The Feminist Wire

Mass Evictions at “Occupy” Camps around the Country 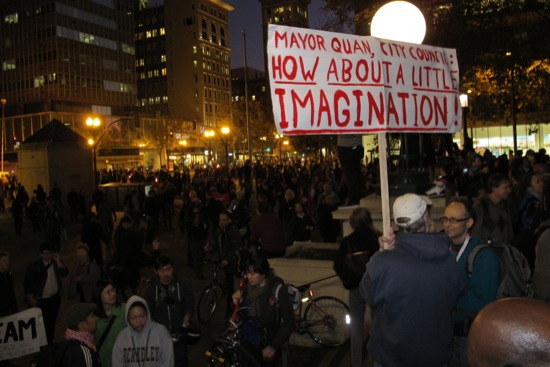 From Denver, Oakland, to New York City, local police have stormed Occupy encampments carrying out eviction orders and arresting peaceful protesters. Given the number of such actions, the move by officials seemed at least loosely coordinated and began in earnest over the weekend reaching fever-pitch with 700-1000 law enforcement descending on Oscar Grant Park in Oakland in the early hours of Monday morning; and the New York City Police turning out in force overnight on Tuesday with orders to clear out Zuccotti Park, or Liberty Plaza. With a joint rally planned on Tuesday with members of Occupy Oakland and students who were recently brutalized at the University of California, Berkeley, the recent actions of police and city officials nation-wide does not seem to have silenced this two-month old movement.

For more read here and here.

Related Items
← Previous Story Paid-Leave Benefits Lagging For Working Moms In US
Next Story → Un-occupy my/our Sexisms: In Solidarity with Tamura Lomax and all Women